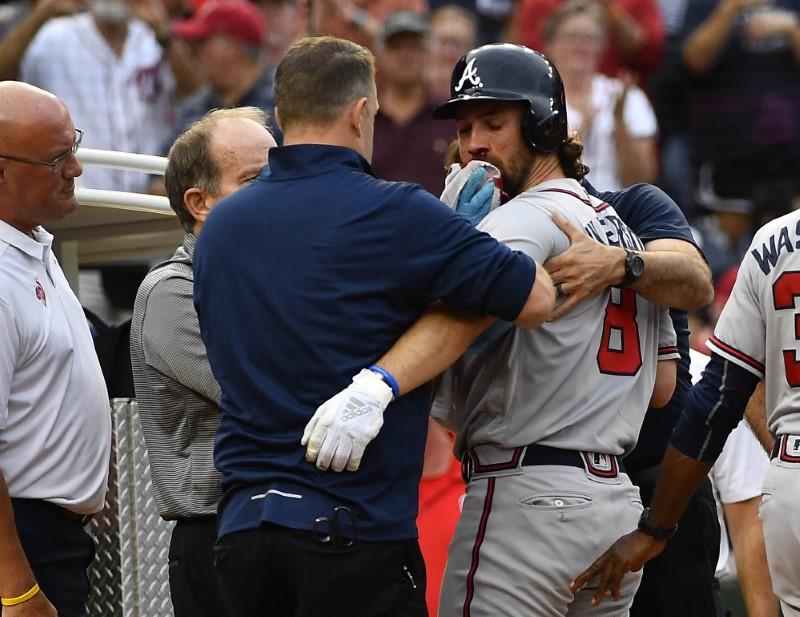 Sep 14, 2019; Washington, DC, USA; Atlanta Braves left fielder Charlie Culberson (8) is looked at by medical staff after being hit with a pitch against the Washington Nationals during the seventh inning at Nationals Park. Mandatory Credit: Brad Mills-USA TODAY Sports

Atlanta Braves pinch hitter Charlie Culberson departed Saturday’s game against the Washington Nationals after being hit in the right side of his face on a failed bunt attempt.

Culberson was carted off the field after the seventh-inning incident and transported to a nearby hospital.

“He was good when he went to the hospital,” Braves manager Brian Snitker said in his press conference following the 10-1 victory. “He was alert and all that kind of stuff. We just don’t know the extent of what’s going on yet. … That’s scary.”

Culberson squared around to bunt as a first-pitch fastball from Nationals right-hander Fernando Rodney sailed toward him. The ball went over Culberson’s bat and smacked into his cheek.

The umpires ruled that Culberson tried to bunt the ball, and it was called a strike instead of being a hit by pitch. Snitker was ejected for vehemently arguing the call.

“You can’t bunt the ball when the ball is coming at your face,” Snitker said. .”.. I’m sitting there looking at this guy with a pool of blood on the ground, like c’mon.”

While Culbertson was being carted off the field with a trainer holding a towel to his face, he gave a thumbs-up sign in the direction of Rodney.

Nationals manager Dave Martinez said after the game that Rodney felt awful over what occurred.