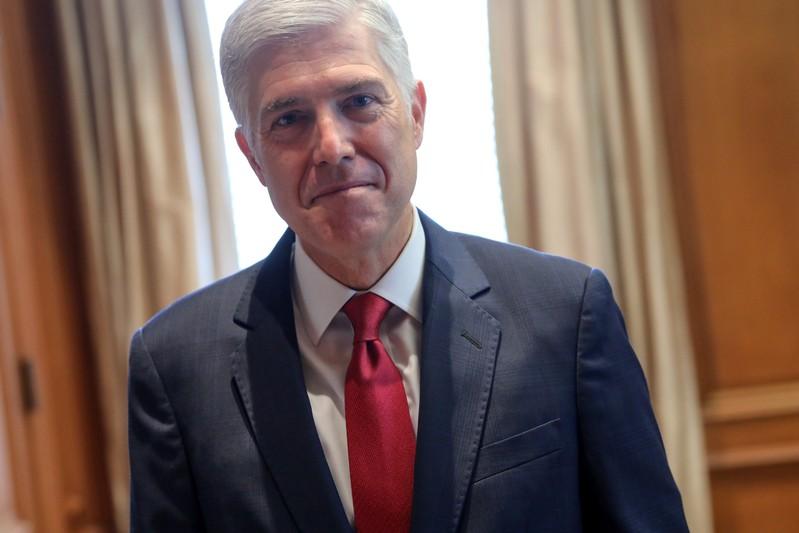 WASHINGTON (Reuters) – Supreme Court Justice Neil Gorsuch on Friday extolled the value of immigration and said his wife’s experience as a naturalized U.S. citizen from Britain has helped give him a greater appreciation of the American system of government.

Gorsuch made the remarks at a time when President Donald Trump, the Republican who appointed the conservative jurist to a lifetime job on the court in 2017, has made hardline policies toward immigration a centerpiece of his presidency and 2020 re-election bid.

Attending naturalization ceremonies where new citizens are sworn in as citizens, Gorsuch said, is one of his favorite experiences. Immigrants who apply for citizenship are sworn in, sometimes by federal judges, after passing a test with questions about U.S. government and history.

“They are moments for me of renewal and commitment,” Gorsuch said in an interview with Reuters, adding that “judges often love doing them for just that reason.”

“I do worry when I read that something like 60 percent of the public would fail that naturalization exam,” Gorsuch added.

The Woodrow Wilson National Fellowship Foundation said in October 2018 that only 36 percent of Americans surveyed could pass the citizenship test.

Gorsuch said his wife, who he met while studying at the University of Oxford in Britain, had helped engender in him an enhanced respect for the U.S. Constitution. The couple have two daughters.

“Part of my appreciation for our Constitution, our remarkable system of government, undoubtedly comes from seeing it through my wife’s eyes,” Gorsuch said. “We take some of our rights perhaps too lightly.”

Gorsuch has been a reliable conservative vote in high-profile cases including those involving Trump. The court has a 5-4 conservative majority.

He was part of the conservative majority that last year upheld Trump’s travel ban on people entering the United States from several Muslim-majority countries. In June, he and three other conservative justices dissented when the court blocked Trump from adding a citizenship question to the 2020 U.S. census that critics said was intended to deter immigrants from taking part in the decennial population count.

Gorsuch on occasion has shown an independent streak, siding with the court’s four liberals in 5-4 rulings in favor of immigrants, criminal defendants and Native Americans.

The 52-year-old justice is engaging in a round of media interviews to promote his new book, “A Republic, If You Can Keep It,” a selection of his writings including court opinions and speeches. In 2018, Gorsuch received a $225,000 payment from his publisher, Penguin Random House, according to his most recent financial disclosure form.

In stressing the need for increased civility in public life, Gorsuch seeks to steer clear of politics. Trump is known for his bare-knuckles approach to taking on political opponents, critics, the news media and judges who rule against him. When asked about Trump’s criticism of judges, Gorsuch declined to respond directly, but did defend the judiciary as a whole.

But he added, “I think the American judiciary is filled with remarkable people, selfless people, men and women who could be making a lot of money and attaining a lot of fame and fortune and who have given that up to serve, mostly anonymously.”