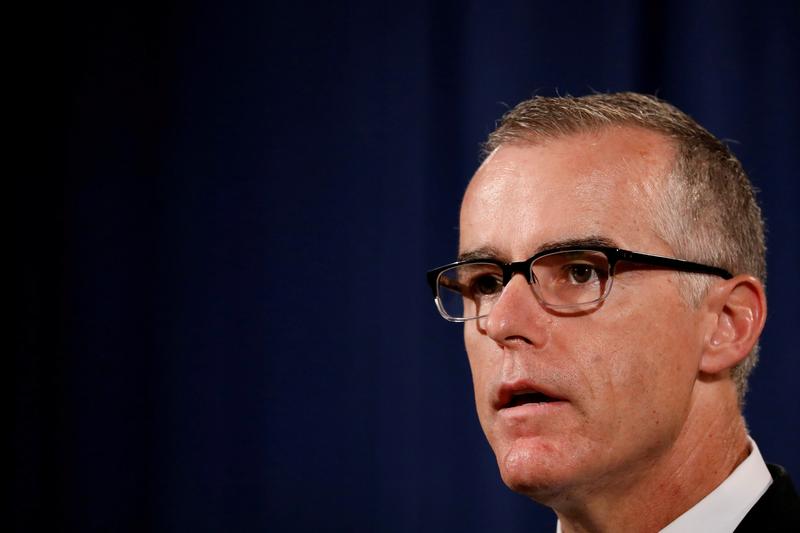 WASHINGTON (Reuters) – A lawyer for former FBI official Andrew McCabe pressed U.S. prosecutors on Friday to drop their politically sensitive case against him, citing reports that suggest they may be having trouble securing criminal charges.

The U.S. Justice Department has been investigating McCabe, the FBI’s former No. 2 official, for more than 1-1/2 years over allegations he misled internal investigators about his decision to share internal communications with a reporter at the height of the 2016 presidential election.

Prosecutors and senior officials within the Justice Department, including Deputy Attorney General Jeffrey Rosen, have recommended moving forward with criminal charges, according to sources familiar with the investigation.

But they might have encountered another hurdle. The Washington Post reported on Thursday that a federal grand jury investigating the case had been called back to consider evidence, but had left without returning an indictment.

Grand juries are used in the U.S. legal system to assess the validity of possible criminal charges in major cases.

To obtain an indictment, U.S. prosecutors typically need to convince the grand jury there is probable cause that a crime has been committed, which is a lower legal standard than that needed to secure a guilty verdict at trial. Proceedings are conducted in secret.

The Justice Department and the U.S. Attorney’s Office for the District of Columbia, which is handling the case, declined to comment.

In an email shared with reporters, McCabe’s lawyer, Michael Bromwich, urged U.S. Attorney Jesse Liu to submit a report saying whether or not the grand jury had recommended criminal charges.

He also said prosecutors should not try to win grand-jury approval a second time if they have failed.

“If the grand jury voted not to approve charges, it did not find probable cause. Therefore, it is simply not reasonable to believe that a trial jury would find Mr. McCabe guilty,” Bromwich wrote.

McCabe was fired in March 2018, just hours before he was due to retire, after the department’s internal watchdog issued a report saying he misled investigators who were trying to determine whether he improperly shared information with a news reporter during the 2016 presidential election.

McCabe has said he tried to answer questions about the incident truthfully and clarified his responses when he thought he had been misunderstood.

McCabe has endured years of criticism by President Donald Trump after playing a key role in the investigation into the Trump campaign’s ties to Russia in the 2016 election.

McCabe has said those attacks are part of an effort to undermine law enforcement and intelligence professionals. He has sued the Justice Department, arguing that he was fired for political reasons.