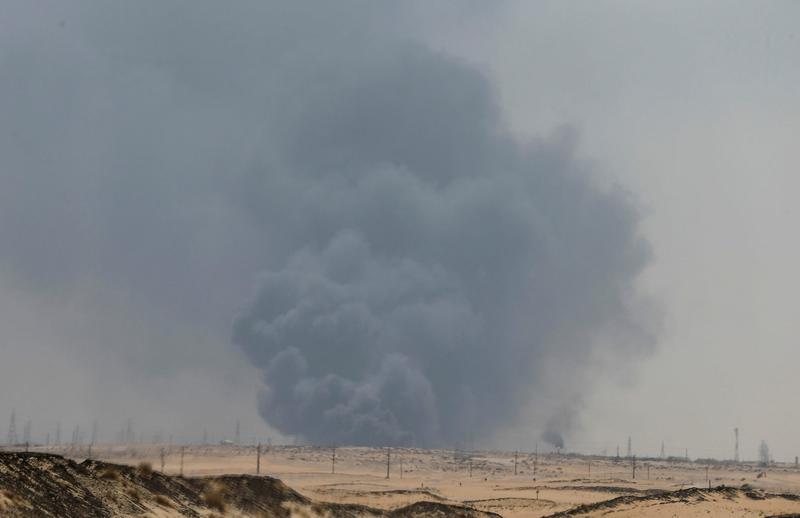 (Reuters) – Yemen’s Iran-aligned Houthi group on Saturday attacked two plants at the Abqaiq plant, the heart of Saudi Arabia’s oil industry, in a strike that could impact about 5 million barrels per day of crude production – close to half of the kingdom’s output or 5% of global oil supply.

Smoke is seen following a fire at Aramco facility in the eastern city of Abqaiq, Saudi Arabia, September 14, 2019. REUTERS/Stringer

Following are reactions to the attack:

“The U.S. strongly condemns today’s drone attacks against oil facilities in Abqaiq and Khurais. These attacks against critical infrastructure endanger civilians, are unacceptable, and sooner or later will result in innocent lives being lost.”

“The IEA is monitoring the situation in Saudi Arabia closely. We are in contact with Saudi authorities as well as major producer and consumer nations. For now, markets are well supplied with ample commercial stocks.”

“It takes 19/20 days to ship Ras Tanura (Saudi) to Singapore, but 54 days from Houston to Singapore. So U.S. ‘relief’ will take time. The real issue here is how much stocks the Saudis have to supply the market until their production is fixed.

“The obvious short-term fix would be waivers on Iran sanctions, but politically that’s a hard pill for the Trump administration to swallow. By all accounts the Iranians have tankers full of storage ready to go.

“Many countries have strategic stocks for exactly this reason. The price (of oil) is going to jump all right, but the Saudis and U.S. have a day to run interference on their positions before then. The most scary result would be a Saudi escalation of the war in Yemen. Then the whole Gulf gets trigger-happy.”

“Abqaiq is perhaps the most critical facility in the world for oil supply. Oil prices will jump on this attack, and if the disruption to Saudi production is prolonged, an SPR release from IEA members seems both likely and sensible.

“This is a reminder why, despite America’s becoming a net-zero oil importer, the SPR remains a key strategic asset. Sanctioned Iran supplies are another source of potential additional oil, but (President Donald) Trump has already shown he is willing to pursue a maximum pressure campaign even when oil prices spike.

“If anything, the risk of tit-for-tat regional escalation that pushes oil prices even higher has just gone up significantly. Will the Saudis feel the need to respond? Will the Americans? I don’t know, but the point is this: Every new attack increases the risks of an unintended escalation to military conflict as each side feels compelled to respond in some way to the preceding incident.”

“Today’s attack on the Abqaiq processing facility constitutes a paramount oil bullish, equity bearish, and global growth negative risk. Details are scarce, but early press reports indicate some 5 mb/d of Saudi production is impacted. The videos on Twitter suggest large-scale damage, though it is possible some of the fire is due to emergency flaring procedures associated with the shutdown. Aramco reportedly said it expects production to restart quickly, suggesting damage may be light. Even if that proves to be the case, such a brazen attack by an Iranian proxy on the crown jewel of the Kingdom of Saudi Arabia’s energy system will raise the overall geopolitical risk premium.”