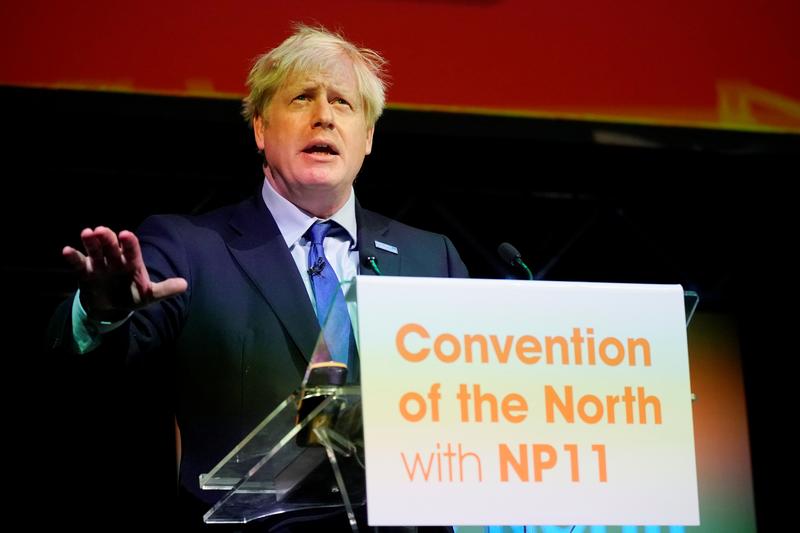 LONDON (Reuters) – Boris Johnson was heckled by a protester in northern England on Friday over his controversial decision to suspend parliament for more than a month in the weeks before Britain is due to leave the European Union.

Britain’s Prime Minister Boris Johnson speaks during the Convention of the North at the Magna Centre in Rotherham, Britain September 13, 2019. Christopher Furlong/Pool via REUTERS

Johnson, a former London mayor who helped lead the campaign to leave the EU, has angered his critics by suspending parliament until Oct. 14.

The government has said it is a normal part of the process of launching a new legislative programme, but Johnson’s opponents have accused the prime minister of trying to prevent them scrutinising his Brexit plans.

“Why are you not with them in parliament sorting out the mess that you have created,” a man shouted as Johnson delivered a speech in Rotherham about giving more power to northern cities.

As he tried to return to his speech, Johnson replied: “I’m very happy to get back to parliament very soon.”

He later said from the stage that the heckler had been thrown out, adding the man had “left prematurely, not necessarily under his own steam”.

It was the third time this month that Johnson has been heckled in the North.

Johnson, who took power seven weeks ago, is a polarising figure for campaigning vigorously to leave the EU, Britain’s biggest geopolitical move in almost half a century.

In a speech setting out plans to give more powers to local authorities, he said that as a former city mayor he knew how local accountability can improve people’s lives.

At this point the heckler intervened with a loudly shouted question: “Like our MPs, Boris? Maybe get back to parliament?”

As the man was removed, Johnson said: “We want to see towns and communities able to represent that guy and sort out his needs.”

Last week, a man interrupted Johnson as he gave a television interview in the street, saying he should be spending more time negotiating with the EU.

Earlier on Friday, Johnson was confronted by an angry woman who criticised the Conservative government’s spending cuts introduced in the aftermath of the global financial crisis.

The government has now said austerity is over and has promised the biggest spending increases in 15 years,

“People have died because of austerity,” the woman said, “and you’ve got the cheek to come here and tell us austerity is over and it’s all good.”