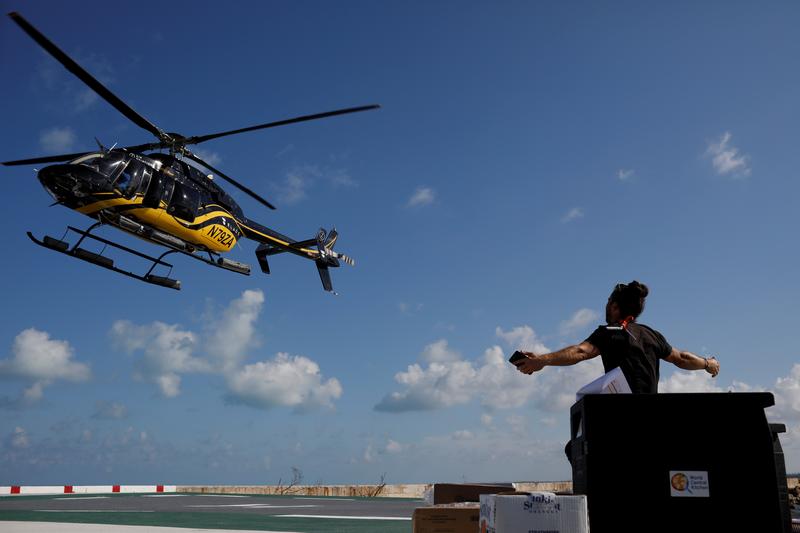 NASSAU (Reuters) – The leading edge of a potential tropical storm brought rain and wind to the Bahamas early Friday, complicating the search for 1,300 people missing in the wake of the worst hurricane to ever hit the island nation and efforts to bring relief to survivors.

A tropical storm warning was in effect for most of the Northwestern Bahamas, including Great Abaco Island and Grand Bahama Island, the Miami-based National Hurricane Center (NHC) said. Those islands were ravaged when Hurricane Dorian ripped through the archipelago as a Category 5 storm two weeks ago.

The new storm could hamper relief efforts and people who have damaged roofs or buildings are advised to move to shelters due to the impending rains, said Carl Smith, spokesman for the National Emergency Management Agency during a news conference.

The weather system will slow movement of the “substantial amount” of food and water already on the ground, he said.

“I hope it does not disrupt it. We have taken precautionary measures to address the potential impact that we may encounter,” Smith said.

Midday on Friday, the tropical disturbance was 280 miles (450 km) east-southeast of Freeport on Grand Bahama Island as it traveled at 1 mile per hour northwest with winds of 30 mph, the NHC said in an advisory.

The storm was expected to dump two to four inches of rain on the islands, where the powerful and slow-moving Dorian had ripped roofs off thousands of dwellings and dumped up to two feet of rain. In some areas, the new storm could drop up to 6 inches of rain through Sunday, the NHC said, but no storm surge was expected.

“Tropical storm force winds, heavy rain and high surf are expected” in the Bahamas, said Dennis Feltgen, the center’s spokesman. “Wet and windy, which is going to make the recovery over the northwest Bahamas that much more difficult.”

The storm is expected to pick up speed as it moves northwest on Friday and could hit Florida on Saturday, it said.

In Florida, a tropical storm watch was in effect for portions of the east-central coast early Friday. South Florida could see tropical storm force winds as early as Friday evening, the NHC said.

The tropical cyclone was not expected to bring anywhere near the devastation of Dorian, which slammed into the Bahamas on Sept. 1 as a Category 5 storm. It was one of the strongest Atlantic hurricanes on record to hit land, packing top sustained winds of 185 miles per hour (298 kph).

With 1,300 people still missing, according to the Bahamian government, relief services are focused on search and rescue as well as providing food, water and shelter.

Aid groups rushed shelter material to residents living in the shells of former homes as the storm threat rose.

United Nations Secretary-General Antonio Guterres will visit the Bahamas on Friday and Saturday to speak with people affected by the hurricane and the humanitarian teams assisting them. He planned to meet with Prime Minister Hubert Minnis in Nassau.

Minnis on Wednesday said the official death toll stood at 50 but was expected to rise. He said he was trying to remove “bureaucratic roadblocks” to bringing aid to areas where the devastation made it hard for relief teams to reach.

Officials have erected large tents in Nassau to house those made homeless by Dorian. They plan to erect tent cities on Abaco to shelter up to 4,000 people.