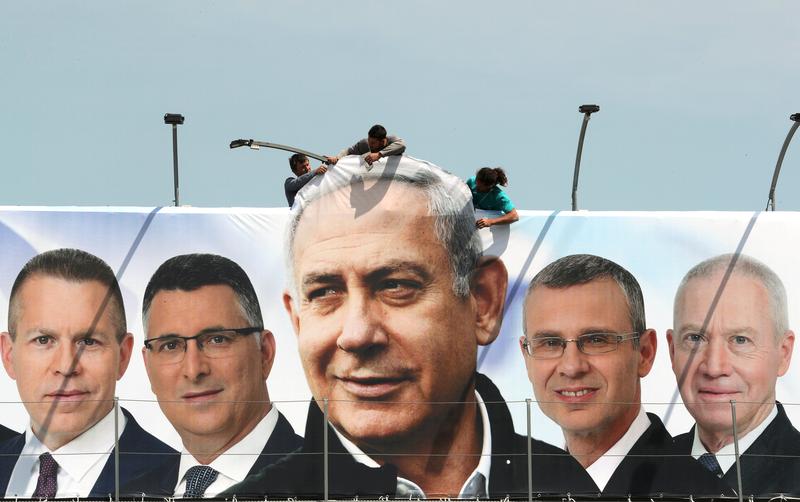 JERUSALEM (Reuters) – Twenty years after Benjamin Netanyahu’s first term as Israel’s prime minister ended, the man hailed by supporters as “King Bibi” is again fighting for his political survival in a rerun election.

Opinion polls predict a close race when Israel goes to the polls on Tuesday, five months after an inconclusive election in which Netanyahu declared himself the winner but failed to put together a coalition government.

An end to the Netanyahu era after his 10 successive years in power would be unlikely to lead to a dramatic change in Israel’s policy on hotly disputed issues in a peace process with the Palestinians that collapsed five years ago.

Relations with the United States would be likely to remain on track, despite Netanyahu’s close relationship with President Donald Trump.

But Netanyahu’s political fate could ultimately end up in the hands of the far-right Yisrael Beitenu headed by former Defence Minister Avigdor Lieberman, a potential kingmaker in the coalition-building certain to follow the vote.

After the election in April, Lieberman blocked Netanyahu’s attempts to form a coalition, citing differences with the prime minister’s ultra-Orthodox allies. Opinion polls indicate Yisrael Beitenu will emerge stronger in the new ballot.

Netanyahu has campaigned hard to avoid losing power, as he did in 1999 against then-Labour party leader Ehud Barak, appearing in hours of live video question-and-answer sessions on Facebook in recent weeks and dominating the news in Israel.

In a step this week that alarmed Palestinian and other Arab leaders but delighted his core right-wing constituency, Netanyahu announced his intention to annex the Jordan Valley in the occupied West Bank.

It was, Israeli political commentators said, a clear attempt to draw votes away from far-right parties.

Netanyahu hammered home a get-out-the-vote message: Applying Israeli sovereignty to the valley, which Palestinians want as part of a future state, will happen only if Likud emerges from the election as the biggest party in the Knesset (parliament).

In Israel, votes are cast for a party’s list of Knesset candidates. Since no party has ever won a majority of seats on its own, Israel has always been ruled by coalitions, making post-election political bargaining key to determining the ultimate winner. [L5N25W3VZ]

Netanyahu has also showcased his relationship with Trump, featuring posters in which both are shaking hands. But there has been no sign from Trump of a “grand gesture” that could bolster Netanyahu as a candidate.

Shortly before the last election, with the prime minister at his side, Trump signed a proclamation recognizing Israeli sovereignty over the Golan Heights. Israel captured the strategic area in a 1967 war and annexed it in 1981, moves not accepted by most world powers, who deem it to be occupied Syrian territory.

The line-up of challengers this time is similar to the one Netanyahu faced in the previous election, with Blue and White his biggest threat.

Blue and White has said it would “strengthen the settlement blocs” in the West Bank, with the Jordan Valley as Israel’s “eastern security border”. But that falls short of an outright commitment to annex the valley, and a party spokesman said a Blue and White-led government would “maintain an open channel” for a peace deal with the Palestinians.

Most of the international community regards the Israeli settlements as illegal, a view that Israel disputes.

The spokesman said the party would seek “the return of bipartisanship to Israel-U.S. relations”, a reference to Netanyahu’s close ties with Trump and his Republican party and sharp differences with the Democrats over issues such as Iran’s nuclear program and Middle East peacemaking.

After an election in Israel, its president gauges, following consultations with all political parties that won parliamentary seats, which legislator stands the best chance of forming a government.

Both Netanyahu and Gantz hope to be tapped, but a photo finish would complicate the picture.

A “national unity” government could avoid or resolve a stalemate if a Likud-led right-wing coalition or a Blue and White-led center-left alliance prove impossible.

Gantz has said his party would not join a government with Netanyahu in it, citing the prime minister’s legal troubles.

If a partnership with Gantz is the only way to stay out of the back benches, prominent Likud members could try to topple Netanyahu as party leader, some political analysts have said.

Blue and White tied with Likud on 35 seats in the April election, and Gantz is seen by some voters as “Mr Clean”.

“His low-key style and relative ineloquence are for many a modest man’s refreshing antithesis to Bibi’s perceived bluster and soloism. Gantz is seen as balanced, cautious and pragmatic,” said Amotz Asa-El, a research fellow at Jerusalem’s Shalom Hartman Institute.

Two weeks after the election, Israel’s attorney-general will hold a pre-trial hearing in which Netanyahu can argue against his announced intention to file fraud and bribery charges against him in the corruption investigations.

Netanyahu, who has denied any wrongdoing, has said he will not quit as prime minister if indicted, and there is no legal obligation to do so. Allies have said they will press parliament to grant Netanyahu, as a member of the body, immunity from prosecution.

After election night, it could all come down to Yisrael Beitenu’s Lieberman, at odds with Netanyahu’s traditional ultra-Orthodox partners over military conscription exemptions for Jewish seminary students.

Lieberman, whose party is projected to double its April Knesset seat tally to 10, has said Yisrael Beitenu will not join up with a Netanyahu administration after Tuesday’s vote if it includes the religious factions.