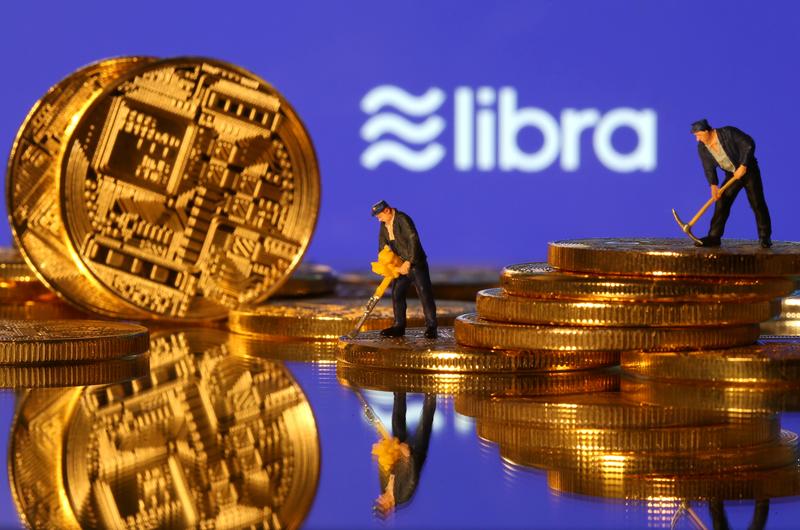 FILE PHOTO: Small toy figures are seen on representations of virtual currency in front of the Libra logo in this illustration picture, June 21, 2019. REUTERS/Dado Ruvic/File Photo

Opposition deepened on Friday, when both France and Germany pledged to block Libra from operating in Europe and backed the development of a public cryptocurrency instead.

Facebook’s goal is for Libra to be run by an association of other corporate investors and non-profit members, with an expected launch in the first half of 2020.

Here are some details about Facebook’s plans:

Libra will be a digital currency backed by a reserve of real-world assets, including bank deposits and short-term government securities, and held by a network of custodians. The structure is intended to foster trust and stabilize the price.

Although Libra prices may not always align with the underlying assets, holders should have a “high degree of assurance” that they can convert coins into traditional currency based on an exchange rate, according to the project’s information.

Libra will trade on a network of exchanges, which Facebook did not identify.

Libra transactions will be powered and recorded by a blockchain, which is a shared ledger of transactions maintained by a network of computers.

The Libra blockchain will be permissioned, meaning that only entities authorized by the governing association will be able to run the computers. Its governance differs from bitcoin, which does not have an entity in charge.

The software will be “open source,” meaning companies outside the association can build applications on top of it.

The association plans to move toward a permissionless blockchain within five years of Libra’s launch.

The Libra Association is a 28-member independent non-profit based in Geneva, Switzerland. It will oversee major decisions about the digital coin.

There is a minimum $10 million investment to join, except for non-profit members like financial inclusion group Kiva. The association aims to have 100 members by launch.

Each will have one vote on important issues. Facebook will be a member via Calibra, a newly created subsidiary that will offer a digital wallet for Libra.

Individuals and merchants will be able to use Calibra to store, send and receive Libras.

It will be available as a standalone app on smartphones, as well as a button within Facebook’s Messenger and WhatsApp products.

Facebook eventually wants to make Calibra available for transactions across its family of apps, such as digital checkouts for purchases on Instagram.

The company appears to be betting it can squeeze revenue out of its messaging services through transactions and payments, something that is already happening on Chinese social apps like WeChat.

Executives envision users purchasing Libra through the app either by linking a bank account or, for people without banks, at physical locations like cash transfer businesses and convenience stores.

Calibra engineers are involved in building the blockchain, though Facebook says it intends to keep the currency and the wallet in separate entities.

Calibra has about 100 employees, mostly based at Facebook’s headquarters in Menlo Park, California, as well as in Tel Aviv. Calibra executive Kevin Weil told Reuters he did not foresee a dramatic expansion beyond that headcount.

Every person who uses Calibra will have to go through a “know your customer” process, which verifies user identities to prevent financial crimes.

That means anyone who signs up must share a government ID and other personal information.

Calibra will provide support to customers who lose phones or their passwords and refund customers whose Libras are stolen by fraudsters, Facebook said.

Calibra will only share user data with parent company Facebook and third parties when it has customer consent, or in other “limited cases,” such as when law enforcement requests information, according to a statement.

Facebook pledged not to use Calibra data to improve ad targeting.

Regulators have raised eyebrows about the Libra project since the week of its launch, citing concerns about its impact on the financial system, user privacy and its potential for use in money laundering.

The Group of Seven advanced economies warned in July that it would not let Libra proceed until all regulatory concerns had been addressed.

U.S. authorities have also expressed caution, including a senior Treasury official who visited Switzerland earlier this week to discuss regulatory standards for cryptocurrencies.

Shortly afterward, Swiss authorities said Libra would be more than just a payments systems and would therefore be subject to extra requirements that typically apply to banks.

The project suffered another setback on Friday, when the French and German finance ministers said that virtual currencies pose risks to consumers, financial stability and even “the monetary sovereignty” of European states.