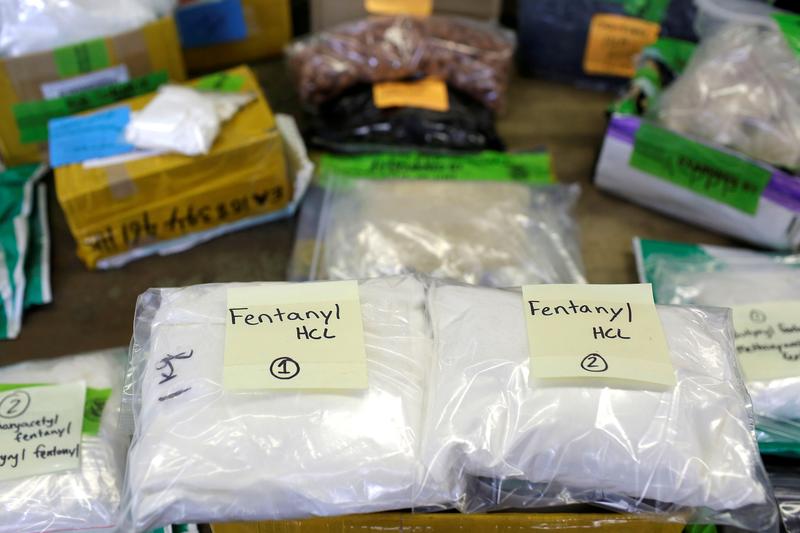 NEW YORK (Reuters) – The U.S. Department of Justice examined using fentanyl in lethal injections as it prepared last year to resume executing condemned prisoners, a then untested use of the powerful, addictive opioid that has helped fuel a national crisis of overdose deaths.

FILE PHOTO: Plastic bags of Fentanyl are displayed on a table at the U.S. Customs and Border Protection area at the International Mail Facility at O’Hare International Airport in Chicago, Illinois, U.S. November 29, 2017. REUTERS/Joshua Lott/File Photo

The department revealed it had contemplated using the drug in a court filing last month, which has not been previously reported.

In the end, it decided against adopting the drug for executions. Attorney General William Barr announced in July his department instead would use pentobarbital, a barbiturate, when it resumes federal executions later this year, ending a de facto moratorium on the punishment put in place by the administration of U.S. President Barack Obama.

But the special consideration given to the possibilities of fentanyl, even as federal agents were focused on seizing illegal imports of the synthetic opioid, show how much has changed since the federal government last carried out an execution nearly 20 years ago.

Many pharmaceutical companies have since put tight controls on their distribution channels to stop their drugs being used in executions.

As old supply chains vanished, many states, and the federal government in turn, have been forced to tinker with their lethal recipes. They have experimented with different drugs, in some cases leading to grisly “botched” executions in which the condemned prisoners have visibly suffered prolonged, excruciating deaths, viewed by some as a breach of the constitutional ban on “cruel and unusual” punishments.

In 2017, Nebraska and Nevada announced they would use fentanyl, which is 100 times more powerful than morphine, in new multi-drug execution protocols.

By 2018, the U.S. Justice Department was also examining the “use of fentanyl as part of a lethal injection protocol,” according to a three-page internal memorandum from March 2018 by the director of the department’s Bureau of Prisons.

The Justice Department revealed the memo’s existence in an August court filing after a federal judge ordered it to produce a complete “administrative record” showing how it arrived at the new pentobarbital execution protocol announced in July.

The full contents of the memo are not public. It is not known why the department decided to examine fentanyl, what supply channels were considered or why it ultimately rejected fentanyl as a protocol. The government’s court filing shows the only other named drug examined as the subject of a department memo was pentobarbital, the drug it now says it wants to use in December and January to kill five of the 61 prisoners awaiting execution on federal death row.

Wyn Hornbuckle, a department spokesman, declined to share a copy of the memo or to answer questions about the government’s execution protocol.

Mark Inch, who was the Bureau of Prisons’ director at the time, acknowledged in a brief telephone interview writing the memo. Inch, who abruptly resigned a couple months after writing the memo, declined to answer questions, in part because he said it would be in conflict with his current role running Florida’s Department of Corrections.

Doctors can prescribe fentanyl for treating severe pain. In recent years, illegal fentanyl has become a common additive in bootleg pain pills and other street drugs, contributing to the tens of thousands of opioid overdose deaths in the country each year. Even tiny quantities can slow or stop a person’s breathing.

Earlier this year, an Ohio lawmaker proposed using some of the illegal fentanyl seized from drug traffickers to execute condemned inmates.

Death penalty researchers say that just because a drug is deadly does not mean it is always appropriate as an execution drug.

“I don’t think it’d be a surprise that the government would be looking at alternative methods of carrying out lethal injection, and fentanyl has been in the news,” Robert Dunham, the director of the Washington-based non-profit group the Death Penalty Information Center, said in an interview.

“But there is just something fundamentally wrong about using a drug implicated in illegal activities as your method of executing prisoners.”

In August 2018, Carey Dean Moore became the first person in the United States to be executed using a protocol that included fentanyl.

Nebraska prison officials injected him with fentanyl and three other drugs. Moore took 23 minutes to die. Witnesses said that before succumbing, Moore breathed heavily and coughed and that his face turned red, then purple.