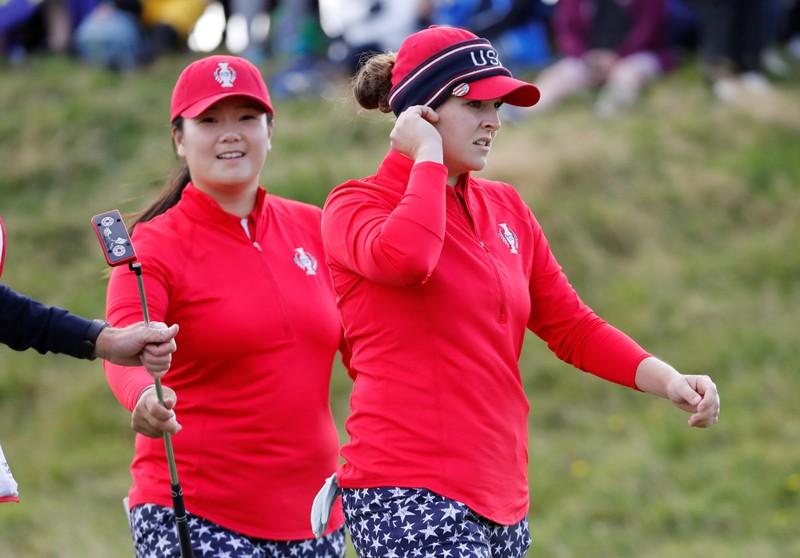 (Reuters) – Team Europe took a one-point advantage over the U.S. into the second day of the Solheim Cup with a 4-1/2 to 3-1/2 lead after Friday’s foursomes and fourballs at Gleneagles.

After Team Europe moved ahead by 2-1/2 to 1-1/2 in the morning foursomes on the PGA Centenary Course, Americans Ally McDonald and Angel Yin brought the scores level with a dominant 7 & 5 victory over Anna Nordqvist and Caroline Hedwall.

However, Europe regained the lead after Suzann Pettersen and Anne Van Dam’s 4 & 2 victory over Danielle Kang and Lizette Salas at the 16th hole, where the Americans conceded the birdie after both players missed their putts.

“I just want to say I had the best partner in the world today,” Pettersen said. “We managed to ham and egg it, which is all you’ve got to do.

“It’s not easy, that front nine — cross-winds, the wind was up from yesterday. And when you have a superstar like this who just bombs it. You’ve got to be very happy.”

Spaniard Carlota Ciganda and Bronte Law nearly won their match for Europe against Jessica Korda and Lexi Thompson, who struggled with her putting throughout the day.

But the honours were shared when, on the 18th hole, Thompson regained her touch and sank a birdie from nearly 20 feet to halve the match after both Europeans missed their putts.

Earlier, Americans Jessica and Nelly Korda had become the first sister pairing to earn a point at the Solheim Cup but Team Europe emerged from the foursomes with a one-point lead.

Catriona Matthew’s European team, roared on by raucous support from the stands, were indebted to Charley Hull and Spain’s Azahara Munoz for some remarkable clutch play.

Hull delivered a near-perfect approach shot to seal a birdie at the 13th hole and that set up a decisive 2 & 1 victory over the U.S. pairing of Megan Khang and Annie Park.

Teeing off in the third match of the morning, the Korda sisters were five up on the front nine and went on to put the Americans on the board with a convincing 6 & 4 victory over Caroline Masson and Jodi Ewart Shadoff.

U.S. captain Juli Inkster was initially sceptical about the merits of pairing the sisters but went ahead after their impressive showing at the Dow Great Lakes Bay Invitational in July where they finished in a tie for 12th place.

Jessica said the secret to their success in the alternate-shot format was having each other’s backs at Gleneagles, the venue for the 2014 Ryder Cup.

“It doesn’t matter if I hit a bad shot, (Nelly’s) like, ‘I’ve got this’, and it’s the same the other way,” said 26-year-old Jessica, who is five years older than her sister. “There’s no disappointment either way, especially in this format.”

Georgia Hall and Celine Boutier earned Europe their first point with a 2 & 1 win over Thompson and Brittany Altomare.

Law and Ciganda halved with Americans Morgan Pressel and Marina Alex, with Ciganda pulling off one of the shots of the day when she sank a 30-foot putt on the 17th to level the match.

Reporting by Hardik Vyas and Rohith Nair in Bengaluru; Editing by Christian Radnedge and Ken Ferris