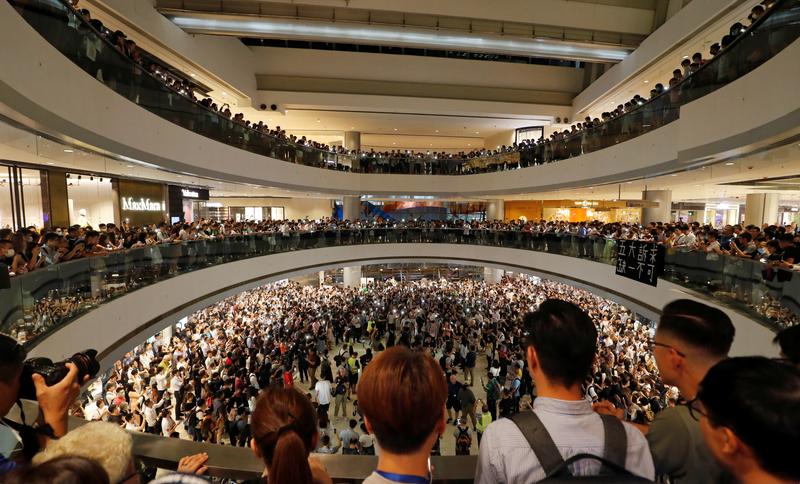 The protest schedule includes another in a series of “stress tests” of the airport, which in recent weeks have seen the blocking of approach roads, street fires and the trashing of a nearby MTR subway station.

Activists plan to gather outside the British consulate on Sunday to demand that China honors the Sino-British Joint Declaration that was signed in 1984, laying out the former British colony’s future after its handover to China in 1997.

China says Hong Kong is now its internal affair. Britain says it has a legal responsibility to ensure China abides by its obligations under the Joint Declaration.

Hong Kong returned to China under a “one country, two systems” formula that guarantees freedoms not enjoyed on the mainland, including an independent legal system.

The current unrest was originally prompted by anger over planned legislation to allow extraditions to China, but has broadened into calls for greater democracy and for Communist rulers in Beijing to leave the city alone.

China denies meddling and has accused the United States, Britain and others of fomenting the unrest.

The Mid-Autumn Festival, which falls on Friday this year, is a harvest celebration observed throughout the Chinese-speaking world and in East and Southeast Asia. It is celebrated with mooncakes, gazing at the full moon and colorful lantern displays.

Protesters plan a series of lantern-carrying human chains and sit-ins at MTR shopping malls and on the scenic Victoria Peak, popular with mainland tour groups, and on Lion Rock, separating the New Territories from the Kowloon peninsula.

There were some lunchtime scuffles on Thursday between pro-Beijing and anti-Hong Kong government demonstrators in the mall of the IFC, a prominent skyscraper on the newly reclaimed Central waterfront. Some top-brand stores briefly closed.

Anti-government protesters gathered there again after office hours, chanting “five demands, not one less” and “add oil, Hong Kong people”, a phrase meaning keep drawing strength that has become a rallying cry of the protest movement.

One of the protest movements five demands was the withdrawal of the extradition bill, to which Hong Kong leader Carrie Lam has agreed. The four others are: retraction of the word “riot” to describe the protests; release of all arrested demonstrators, now numbering 1,365; an independent inquiry into perceived police brutality; and the right for Hong Kong people to choose their own leaders.

“In previous marches applied for by CHRF, participants, reporters and police suffered serious injuries,” police said in their refusal letter to the group.

Dozens turned out for a protest outside Prince Edward MTR metro station to mark the night of Aug. 31, when police were caught on CCTV beating protesters on a train as they cowered on the floor.

The MTR has since become a prime target of vandalism. Activists are angry that the MTR closes stations to stop protesters from gathering and has demanded the transit company release CCTV footage of the beatings.

“Why don’t they give the public the CCTV footage?” asked protester Luk, 21. “…There are many injured and being arrested during this protest. We will never surrender.”