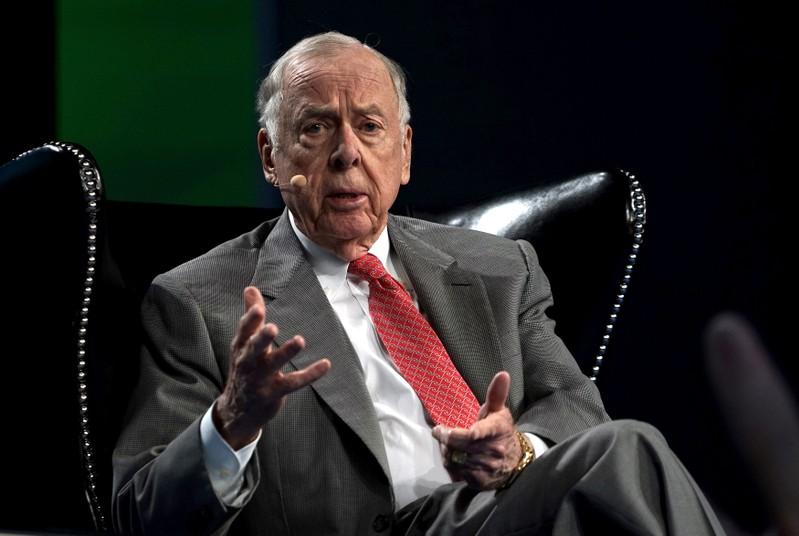 Billionaire oilman T. Boone Pickens, known in sports circles as a mega-booster of Oklahoma State athletics, died Wednesday at his Dallas home. He was 91.

Pickens reportedly donated about $500 million to Oklahoma State, which he graduated from in 1951 after beginning his college career on a basketball scholarship at Texas A&M. He transferred to what was known then as Oklahoma A&M after losing his scholarship following an elbow injury.

Much in the same way as Nike founder Phil Knight did at Oregon, Pickens and his money helped raise a football program. Oklahoma State renamed its football stadium Boone Pickens Stadium in the fall of 2003. His signature donation to Oklahoma State athletics was a $165 million gift in 2006 — with about $120 million earmarked for football facilities — to help launch a wave of football success for the Cowboys and coach Mike Gundy, who was just beginning his second season.

Starting in 2008, the Cowboys have appeared in the Associated Press Top 25 in every year, haven’t had a losing record and have posted six seasons with at least 10 victories. The Cowboys won the Big 12 title in 2011, then beat Stanford in the Fiesta Bowl to finish 12-1 and No. 3 in the AP poll.

—The NCAA sent a letter to California Gov. Gavin Newsom, urging him not to sign a bill that would allow college athletes in the state to accept endorsement money without repercussions.

Both the state assembly and senate have approved the bill, known as the Fair Pay to Play Act. Now, it will be sent to Newsom, who has 30 days to sign it into law.

The NCAA contends the proposed legislation is unconstitutional and would “upend the balance” of competition in college sports. If approved, the legislation would take effect in 2023. Schools would not be allowed to declare a student-athlete ineligible or take away scholarships for accepting endorsement fees.

—Tennessee reinstated sophomore cornerback Bryce Thompson, who was suspended after he was arrested Aug. 24 on a misdemeanor charge of domestic assault.

The charge stemmed from an argument between Thompson and a woman, identified as his girlfriend, at the Knoxville campus’ Stokely Hall, in which Thompson allegedly told her that he would “slap the (expletive) out of (her).” Other witnesses reportedly told police they heard him threaten to “shoot up the school.”

“As university processes have progressed relating to Bryce Thompson, we’ve all taken this situation very seriously,” Coach Jeremy Pruitt said in a statement announcing the reinstatement. “I believe Bryce can grow by following the plan the university has put in place for him. As a result, I am allowing him to return to practice.”

Williams, from Lancaster, Calif., was ranked as the No. 6 wide receiver in the Class of 2018. He played in all 12 games for USC in 2018 but had only four catches for 87 yards and a touchdown.

This season, he didn’t play in the Trojans’ season-opening win against Fresno State, and he caught just one pass for 11 yards in a Week 2 win over Stanford. Williams has three years of eligibility left, and his redshirt is still available.

“Unfortunately, I have sustained another injury, one that means an end to my football career,” Neuville wrote. “I am extremely grateful for the opportunity I had this year and throughout my time at Wisconsin.”

Neuville, who recently was granted a sixth year of eligibility by the NCAA, did not disclose his most recent injury. He sustained season-ending knee injuries in both 2017 and ‘18. He ends his Badgers career with 10 receptions for 84 yards and two touchdowns in 42 games.

—Purdue linebacker Markus Bailey will miss the rest of the season because of a knee injury suffered in practice. Coach Jeff Brohm told reporters that Bailey sustained the injury in a non-contact drill on Tuesday.

A fifth-year senior, Bailey has had an injury-riddled career with the Boilermakers. He had hip surgery in the offseason and earlier had knee surgery. He has played 43 games in his Purdue career and recorded 327 tackles, 13 1/2 sacks and six interceptions.

“He’s been a tremendous player for us and worked extremely hard in the offseason to overcome a hip surgery,” Brohm told reporters. “He was getting ready to have an outstanding year.”