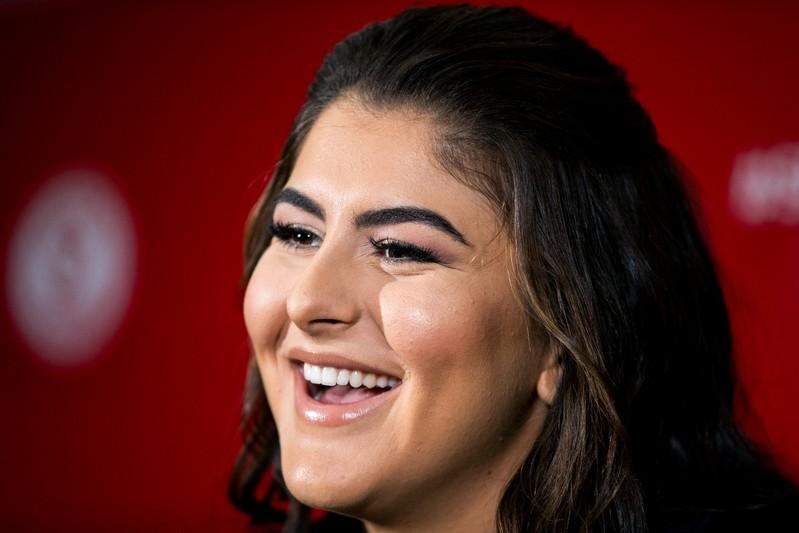 TORONTO (Reuters) – U.S. Open champion Bianca Andreescu returned to her hometown a conquering hero on Wednesday with a little more celebrating to do before getting back to work and setting new goals, such as staying injury-free.

Canadian tennis player Bianca Andreescu speaks with the news media about her win at the U.S. Open, after arriving in Toronto, Ontario, Canada September 11, 2019. REUTERS/Carlos Osorio

Looking weary after a whirlwind media tour of New York, Andreescu said she was running on adrenaline after her shock straight sets win over 23-times Grand Slam champion Serena Williams in the final of the U.S. Open on Saturday.

The celebrations are expected to become a regular thing for Andreescu, who pundits predict will soon climb to number one in the world rankings and win many more Grand Slams.

The future seems impossibly bright for the 19-year-old Canadian, but her meteoric rise has not come without challenges particularly with injuries,which at one point threatened to derail her breakthrough season.

“If I’m healthy then I think I can do even bigger things in this sport,” Andreescu told reporters. “One of an athlete’s biggest enemies I think is being injured.

“I think the main goal right now is to stay as healthy as I can because I’ve been injured quite a bit in my short career.”

Not yet out of her teens, Andreescu has already spent a good chunk of her young career battling back, leg and shoulder issues that caused her to miss a big chunk of the claycourt campaign and all of the of the grasscourt season, including Wimbledon.

But on the North American hardcourts Andreescu looked invincible.

She beat Williams in the final of the Rogers Cup in August to become the first Canadian to win the national title in 50 years then staged a remarkable run to the trophy in Flushing Meadows.

Having won her first Grand Slam, two of the WTA Tour’s elite events in Toronto and Indian Wells and shot to number five in the world rankings, Andreescu has had to do a quick reset of her goals, having already far exceeded her targets for 2019.

Now she is focused on qualifying for season ending WTA Tour finals, climbing further up the rankings and representing Canada at the 2020 Tokyo Olympics.

“I have pretty big expectations for myself,” said Andreescu. “I kind of have an idea, I want to do well in my next couple of tournaments in Asia to hopefully qualify for the WTA Tour finals in China and crack the top three.

“I’ve accomplished a lot this past year and I feel I can do even more, now I actually believe I can do more after all of this success so I am going to keep striving and hopefully win many more Grand Slams.

“I have been thinking about playing the Olympics for a couple of years, I think it is a very special event.”

Before all that, Andreescu will bask in the glow of her U.S. Open triumph just a little bit longer.

She plans to celebrate a bit more with her hometown friends but is also looking forward to sleeping in her own bed.

“I’ve been getting more recognized than usual,” said Andreescu, who was ranked an anonymous 178th in the world at the end of last season. “It’s been hectic.

“I am definitely going to celebrate with some of my friends but it is time to move on after all this media stuff.

“Today I will celebrate a little bit, but I am focused on what’s to come.”