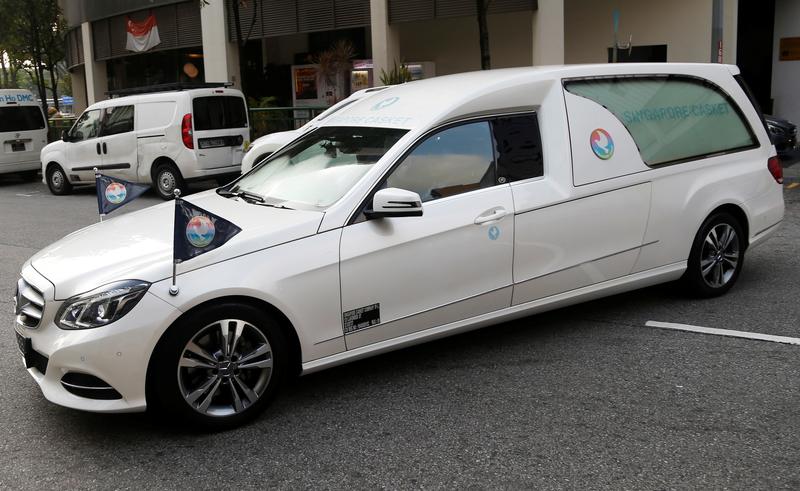 A hearse carrying the body of the late former Zimbabwe President Robert Mugabe leaves the funeral parlour for the airport in Singapore September 11, 2019. REUTERS/Feline Lim

SINGAPORE (Reuters) – The body of Zimbabwe’s former president Robert Mugabe was en route from Singapore to Zimbabwe on Wednesday, five days after he died in hospital in the city-state, according to an event schedule issued by his embassy and flight data.

A private jet departed from Singapore’s international airport in the direction of southern Africa on Wednesday morning, according to flightradar14.com, a plane tracking website.

Earlier, a police motorcade escorted vehicles to the airport from the Singapore Casket, a funeral parlor where Mugabe’s body was being held.

Mugabe’s body was expected to arrive in Zimbabwe on Wednesday at 3 p.m. (1300 GMT), a family member told Reuters on Sunday. A spokesman for the Mugabe family could not immediately be reached for comment.

Mugabe died on Friday aged 95 in Singapore, where he had long received medical treatment. He had dominated Zimbabwean politics for almost four decades from independence in 1980 until he was removed by his own army in a November 2017 coup.

Revered by many as a liberator who freed his people from white minority rule, Mugabe was vilified by others for wrecking one of Africa’s most promising economies and ruthlessly crushing his opponents.

Mugabe’s family is pushing back against the government’s plan to bury him at the National Heroes Acre monument in the Zimbabwe capital Harare and wants him to be interred in his home village, relatives have told Reuters.