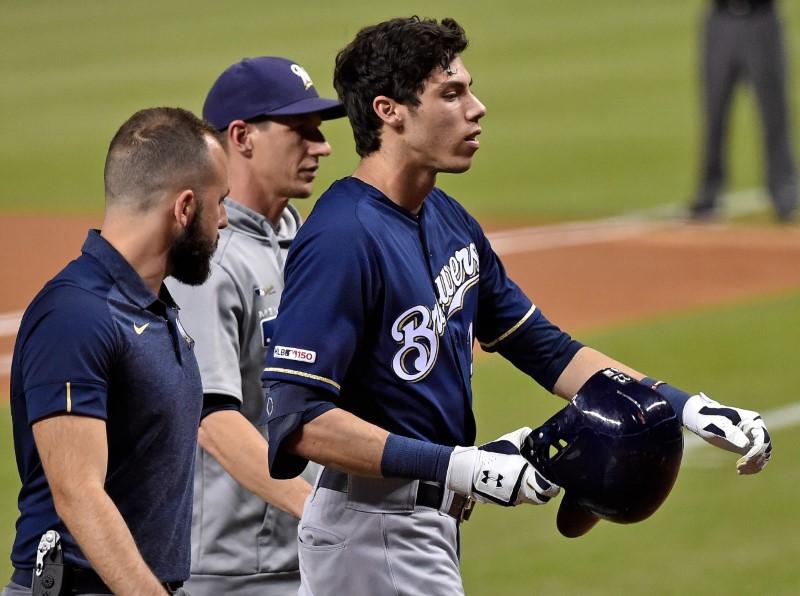 Milwaukee outfielder Christian Yelich left the Brewers’ game in Miami on Tuesday in the first inning after fouling a pitch off his right knee.

Yelich, the reigning National League MVP, went down to the ground and sat for a few minutes. He tried to get up a few times before eventually walking off under his own power. Trent Grisham pinch-hit for him, entering with a 1-2 count and striking out.

Yelich, who was given the strikeout, entered Tuesday batting .330 with an NL-best .430 on-base percentage and a majors-best .672 slugging percentage and 1.102 OPS. The 27-year-old slugger has a career-high 44 home runs along with 97 RBIs in 129 games this season.

The Brewers entered Tuesday two games behind the Arizona Diamondbacks in the chase for the second wild card in the National League.

Buxton, 25, suffered a left shoulder subluxation (partial dislocation) when he crashed into the outfield wall on Aug. 1 at Miami. He rejoined the team Sept. 1 and appeared briefly in five games as a late-game defensive replacement, but did not have any at-bats.

—Near the end of another stint on the injured list stint due to a balky right knee, New York Yankees left-hander CC Sabathia says he has passed on season-ending surgery because his team is in title contention.

Speaking with the New York Post, Sabathia made it clear that pursuing a World Series title helped him through stints on the IL.

Sabathia, 39, has made four trips to the IL this season, which he has said will be his last. The three most recent — May 23-June 2, July 28-Aug. 18 and Aug. 31 to his expected return Wednesday — have been caused by his right knee. He had fluid drained from the knee and a cortisone shot at the end of August.

—Major League Baseball will mark the 18th anniversary of the terrorist attacks of Sept. 11, 2001, on Wednesday with tributes, special caps and base markers.

Games will be played in 15 cities on Wednesday, and each ballpark is scheduled to hold pregame ceremonies and a moment of silence to mark 9/11. Among those games is the New York Mets hosting the Arizona Diamondbacks.

“All of our clubs have a commitment to honoring those whose lives we lost and to ensuring that we don’t forget,” Melanie LeGrande, MLB’s vice president of social responsibility, told MLB.com. “We’re preserving the legacy for those who perished on that day.”