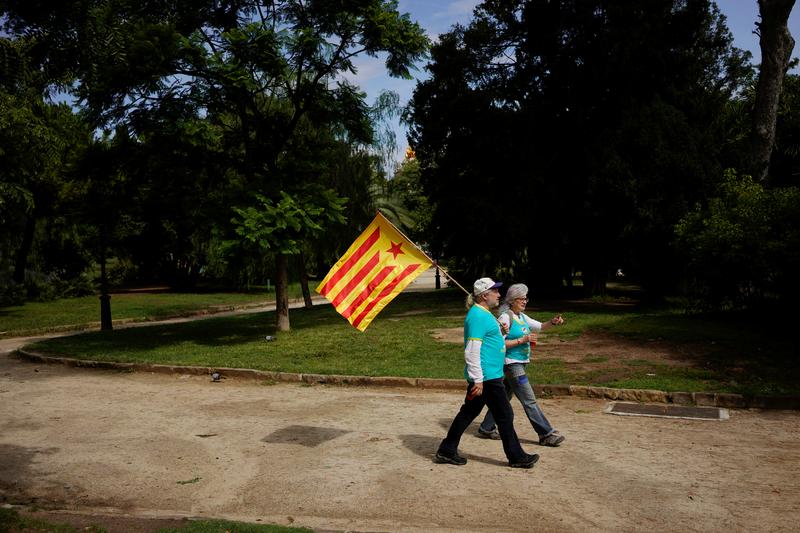 BARCELONA (Reuters) – Catalan separatist supporters draped in pro-independence flags gathered in the regional capital Barcelona on Wednesday for a huge rally to call for a break from Spain and the release of their jailed leaders.

Massive secessionist rallies have taken place on Catalonia’s commemorative day on Sept. 11 – known as the “Diada” – since 2012.

The size and tone of this year’s event will act as a gauge on the strength of the separatist movement two years after it brought on Spain’s biggest political crisis in decades and provoked a crackdown by the Madrid government.

It is now at a defining moment at a time when national politics themselves are in turmoil.

The “Diada” also takes place ahead of a court verdict expected next month on 12 separatist leaders – nine of whom are in jailed – for their role in a banned referendum and short-lived unilateral declaration of independence in 2017.

“We’re very, very angry because nine of our politicians are in jail for letting us vote,” 66-year old Monsterrat Balaguer Selga, a retired nurse who cast a vote for independence in the 2017 referendum, said in the center of Barcelona before the rally, due to start in the late afternoon.

“We want independence,” said 17-year old Maria Antichillimos, a pro-independence flag draped around her shoulders. “We will never get tired because we know what we want and will keep fighting for it.”

Police officers blocked the entrance to the Catalan parliament as some protesters holding pro-independence banners approached.

Organizers said they expected hundreds of thousands to take part in the rally, while separatist leaders said another unauthorized referendum remained an option on the political front.

In 2017, Catalan leaders defied a judicial ban by carrying out the secessionist vote. The confrontation saw police wielding batons at crowds seeking to vote and prompted the then-conservative government to temporarily impose direct rule from Madrid on the region.

Prosecutors are seeking sentences ranging from 7 to 25 years, the latter only for Junqueras. They face charges of rebellion, sedition and misappropriation of public funds.

“What the state intends with this sentence is to behead a peaceful movement and, as it cannot detain two million citizens, it locks us up,” said Oriol Junqueras, 50, the jailed leader of the left-wing Esquerra Republicana de Catalunya party.

Asked if he would rule out acting unilaterally again on a referendum, Junqueras, answering questions from Reuters, said: “We cannot discard any option that is democratic and peaceful”.

Another jailed separatist leader, Jordi Cuixart, said on Twitter: “We will never give up on being free.”

“We’ll do it again,” he said, using what has become a separatist catchphrase referring to the 2017 referendum and independence declaration.

However, there are growing divisions among separatists on what the next steps should be and some of those who came to the Diada rally expressed exasperation with pro-independence politicians.

“I don’t believe in politicians,” said 52-year Cristina Montero, who came with her partner and teenage son to attend the march. “I believe in the sentiment of the people coming here.”

One way or the other, the Supreme Court ruling, expected in the first half of October, is likely to mark a defining moment for a movement that still influences national politics.

Spanish and Catalan politicians on Wednesday showed their different expectations for the “Diada”, the anniversary of the fall of Barcelona to Spanish forces in 1714.

Spain’s acting Socialist prime minister Pedro Sanchez said that he hoped that one day, the “Diada” would not be a celebration of “only a part of Catalans”, referring to separatists.

But Carles Puigdemont, the former Catalan head of government who fled to Belgium after the failed separatist bid, said: “Today we will show again to the world that we persist despite repression, that we have the right to live in peace and freedom, and that no one can decide for us our future,” he tweeted.

A poll published in July by a public Catalan institute showed support for an independent Catalonia at its lowest level in two years, with 48.3% of people against and 44% in favor.