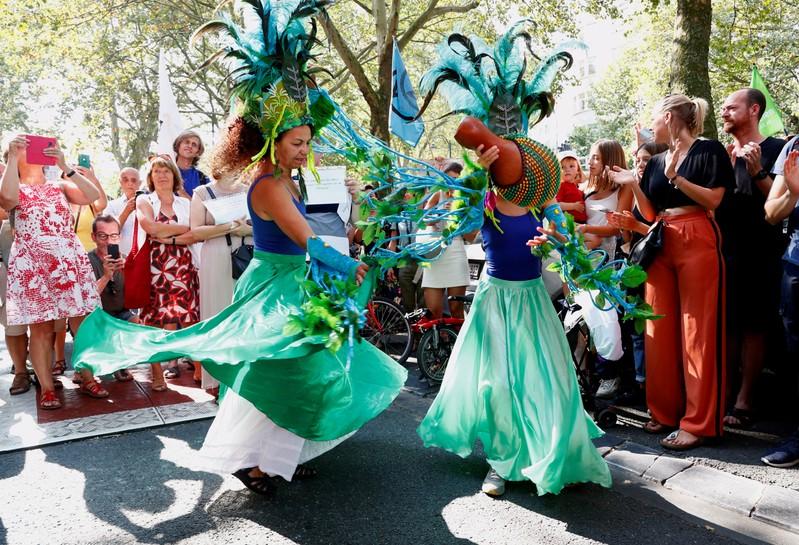 WASHINGTON (Reuters) – Environmental groups, including Extinction Rebellion, said on Wednesday they plan to shut down traffic in Washington, D.C., on Sept. 23 and bring daily life to a standstill to demand action by U.S. politicians on tackling climate change.

The roughly 15 groups planning the protest include traditional environmental groups like 350 DC and Friends of the Earth Action, as well as groups that focus on other issues, such as Black Lives Matter and Code Pink, a women-led group promoting peace and human rights.

Kaela Bamberger, an activist aligned with Extinction Rebellion DC, said the coalition plans to ratchet up pressure on policymakers by shutting down traffic at major intersections because rallies, marches and petitions have not worked.

“This is definitely a next-level action. The urgency of climate change warrants such an attempt to disrupt business as usual… to make it impossible for people with decision-making power to go about their daily lives as if we are not in the climate emergency,” Bamberger said in an interview.

The protest is also timed to draw attention to a global climate strike on Sept. 20 and a U.N. climate summit on Sept. 23.

Employees of large U.S. companies are also participating in the strike. About 1,000 Amazon workers will walk out that day, a group called Amazon Employees for Climate Justice said in a piece on Medium.

Thousands of supporters of the Extinction Rebellion climate activist group occupied four sites in London in April and stopped trains in one of the largest civil disobedience campaigns there in decades. London police said the group will not be allowed to repehere that kind of disruption when they hold demonstrations in October.

Heathrow Pause, a splinter group of Extinction Rebellion, plans to disrupt London’s Heathrow airport on Friday by flying drones within a restricted zone. The group plans to fly drones no higher than head level and give the airport one hour’s advance notice. The airport has said the plan is illegal but that it had plans to make sure it can continue to operate.

Alaina Gertz, a spokeswoman for the DC Metropolitan Police Department, said it was aware of an environmental protest scheduled on Sept. 23 and that it is “equipped to handle any-sized First Amendment demonstration.”

The U.S. Secret Service did not immediately respond to a request for comment about the protest.