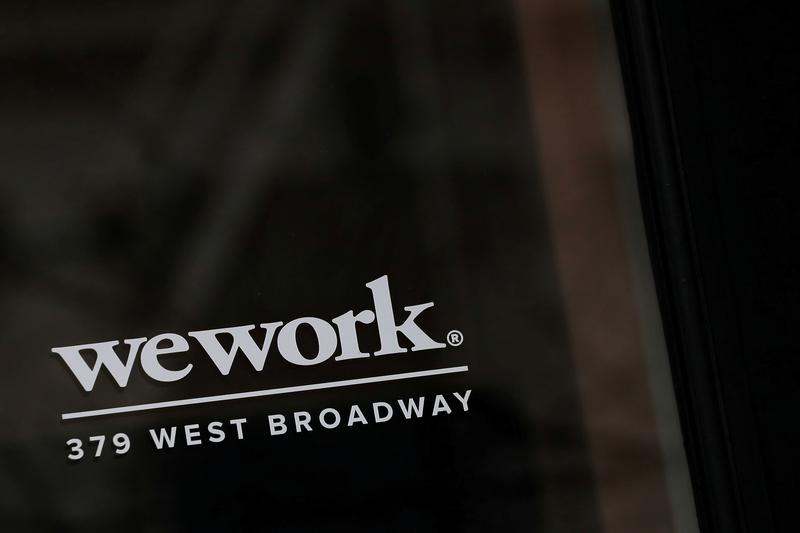 (Reuters) – Office-sharing startup WeWork is pressing ahead with plans to go public despite lukewarm interest in its shares, three sources said, leaving its largest investor, SoftBank Group (9984.T), with a stark choice: take a haircut or pony up even more cash.

The We Company, WeWork’s parent, may seek a valuation as low as $15 billion to $18 billion in an initial public offering, down from the $47 billion value it commanded in the last private fundraising round in January, one source familiar with the situation said.

That means SoftBank, which has invested $10.65 billion in WeWork since 2017 through its Saudi-backed $100 billion Vision Fund and other vehicles, would have to write down the value of its investment should the IPO go ahead.

Sources familiar with the situation cautioned that no final decisions have yet been made and the plans around valuation and timing of the IPO are all still subject to change.

The sharply lower valuation reflects concerns around the sustainability of We Company’s business model, which relies on a mix of long-term liabilities and short-term revenue, and how such a model would weather an economic downturn, according to investors and analysts.

A sharp cut to WeWork’s valuation would be a blow to SoftBank as at a time when it is seeking funds from investors for a second Vision Fund, for which it says $108 billion in pledges have been secured.

Returns for SoftBank first Vision Fund have already been hit by lackluster listings of Uber (UBER.N) and Slack (WORK.N).

SoftBank chief Masayoshi Son and longtime lieutenant and group Vice Chairman Ron Fisher were in favor of the WeWork IPO until last week, even as others inside the group were pushing for a delay, one of the sources said.

However, in recent days Son and Fisher have now conceded internally that a delay might be in SoftBank’s best interests, the source added.

Son and SoftBank have been pushing We Company Chief Executive Adam Neumann to delay the IPO but have so far failed to persuade him, according to two sources familiar with the matter.

Having burned through $2.36 billion in cash in the first half of the year, WeWork requires a fresh injection of funds and is looking to raise between $3 billion and $4 billion in the IPO, Reuters has reported.

Adding to the importance of We Company going public is the $6 billion in bank commitments it secured in August, which is dependent on it raising at least $3 billion from the IPO.

Given its need for cash, a postponement of the IPO would be feasible if SoftBank would inject more cash into WeWork, a proposition Son has so far been reluctant to pursue given how much the fund has already put in, according to two sources.

For its part, WeWork may now wait until Monday of next week to begin its roadshow to pitch the IPO to investors given that it is still waiting on approval for its filing from the U.S. Securities and Exchange Commission, according to one source familiar with the matter.

The company had previously hoped to be in a position to begin its IPO roadshow as early as this week, Reuters has reported.

Reflecting the uncertainty in its IPO plans, We Company’s $669 billion junk bond 96208LAA9= issued last year fell below par on Tuesday for the first time since announcing its IPO plans about a month ago. The 7.875% note due in May 2025 was down 2.5 cents on the dollar and the yield surged by 55 basis points to the highest since mid-August.

While SoftBank and its Vision Fund emphasize their long-term investing credentials, founder and CEO Son has set out an ambitious IPO pipeline for tech investments spanning ride-hailing, fintech and health startups.

The tech conglomerate has burned through much of the $100 billion raised by its first Vision Fund in just two years, recording big paper gains on internal revaluations of its tech investments as well as the sale of marquee investments including India’s Amazon Inc (AMZN.O) rival Flipkart.

SoftBank says its valuation techniques include cash-flow analysis, recent transactions and comparison with peers to underpin its numbers, but Son has won a reputation for intuitive bets and for doubling down on companies which have yet to generate hard results.

SoftBank says many investments receive a vote of confidence as third parties come in as co-investors or by making follow-on investments at the same or higher valuations.

If a tech company shelves an IPO due to a lower valuation than expected, investors are generally expected to take that fall into account when appraising their stakes.