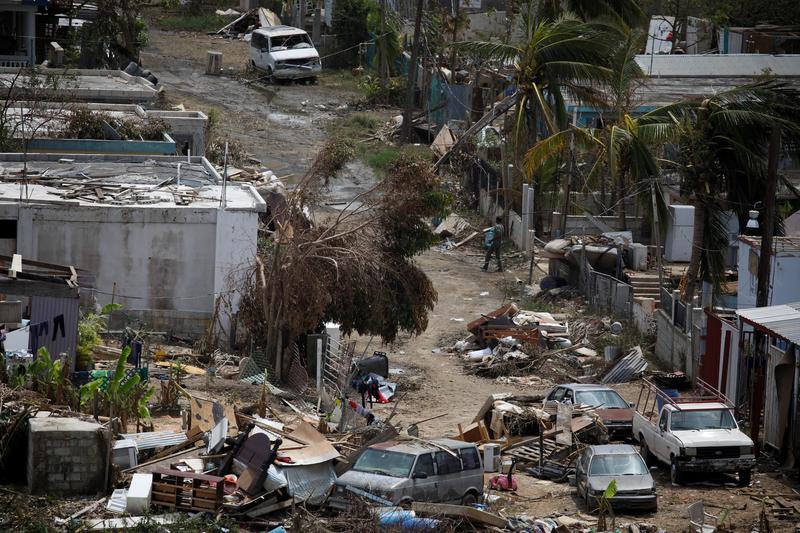 FILE PHOTO: A man carrying a water container walks next to damaged houses after the area was hit by Hurricane Maria in Canovanas, Puerto Rico, September 26, 2017. REUTERS/Carlos Garcia Rawlins/File Photo

WASHINGTON (Reuters) – The U.S. Justice Department on Tuesday announced corruption charges against a senior government official and a contractor who worked to rebuild Puerto Rico’s electrical grid after Hurricane Maria devastated the island in 2017.

In a 15-count indictment, U.S. prosecutors allege that Ahsha Tribble, who oversaw the Federal Emergency Management Agency’s efforts to restore electrical power after the hurricane, accepted helicopter rides, hotel rooms and other bribes from Donald Ellison, president of a company called Cobra Acquisitions LLC, which performed much of the work.

Prosecutors also charged Jovanda Patterson, a former FEMA deputy chief of staff who they say evaluated Cobra’s work even as she was trying to get a job with the company. Patterson also lied about her government pay to secure a higher salary at Cobra, they say.

FEMA and Cobra’s parent company, Mammoth Energy Services Inc., both said they were cooperating with the investigation.

As part of the investigation, prosecutors have $4.4 million, a sailboat, and construction equipment from Ellison, according to the announcement.