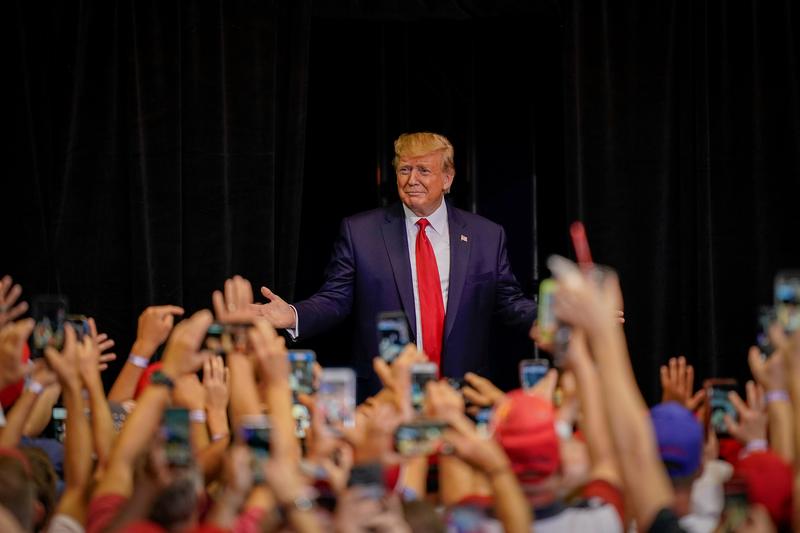 FAYETTEVILLE, N.C./WASHINGTON (Reuters) – U.S. President Donald Trump is going all-out to try to keep a North Carolina district in the Republican column in a special congressional election on Tuesday that may serve as a bellwether for his own fortunes in 2020.

Trump went to Fayetteville, a city in North Carolina’s 9th Congressional District, on Monday to rally Republican supporters in a repeat election of a 2018 contest that was tainted by fraud. Both Republicans and Democrats expect Tuesday’s election to be close and to provide clues about what might happen in presidential and congressional elections next year.

Republican Dan Bishop, a 55-year-old state senator who has embraced Trump’s policies and some of his political tactics is facing 36-year-old Democrat Dan McCready, a small-businessman and U.S. Marine Corps veteran in Tuesday’s race.

Bishop’s campaign ads have said McCready “admires socialism” and linked him to the “Squad,” a group of progressive House Democrats that Trump has repeatedly attacked.

Trump picked up on the theme, one of his favorites against Democrats running in 2020.

“To stop the far left, you must vote in tomorrow’s special election,” Trump told the cheering crowd. “Tomorrow is your change to send a message to the America-hating left.”

Bishop’s campaign says the most important issues are taxes, the economy and immigration, while McCready has focused his race on healthcare, education and the pay of North Carolina teachers.

McCready met with fellow veterans in Fayetteville hours before Trump’s speech and talked about how Americans were getting “crushed” by healthcare costs.

Opinion polling indicates a tight race, with turnout an important factor. The result will not affect the balance of power in the Democratic-controlled House of Representatives.

Trump said he believed Bishop had a good chance of winning and that the contest had become “less close” since his own involvement began about two weeks ago. Trump stressed, however, that “I’m not running.”

The sprawling 9th District, a combination of suburban and rural areas stretching south and east of the city of Charlotte, has been represented by Republicans for decades, and voted for Trump by about 12 percentage points in 2016. A Republican loss would be a worrisome sign for the president and his party.

But Democrats are daring to hope for an upset that would build on their takeover of the House from Republicans in elections last year and make further inroads in “Trump country.”

The national press secretary for Trump’s 2020 campaign, Kayleigh McEnany, said the campaign did not buy into the narrative that the 9th District election, whatever the results, was predictive of the 2020 campaign.

“The president is not on the ballot,” she said. “It’s a big difference when he is.”

“No, I don’t see it as a bellwether,” Trump told reporters before he left the White House.

U.S. Vice President Mike Pence also campaigned for Bishop on Monday, speaking at a “Get out the Vote” event with the candidate in the town of Wingate. He urged voters to turn out in Union County, a suburban Charlotte county that some analysts say could be a key battleground in the race.

The district was already getting more competitive in 2018 when McCready lost narrowly before state officials ruled the election was marred by an absentee-ballot fraud scheme that benefited McCready’s then-opponent, Republican Mark Harris. A new election was ordered, and Harris declined to run again.

Trump exhorted supporters to set the tone for next year with a victory in North Carolina.

“Tomorrow we take the first steps to firing (House of Representatives) Speaker (Nancy) Pelosi and winning back the House in 2020.”