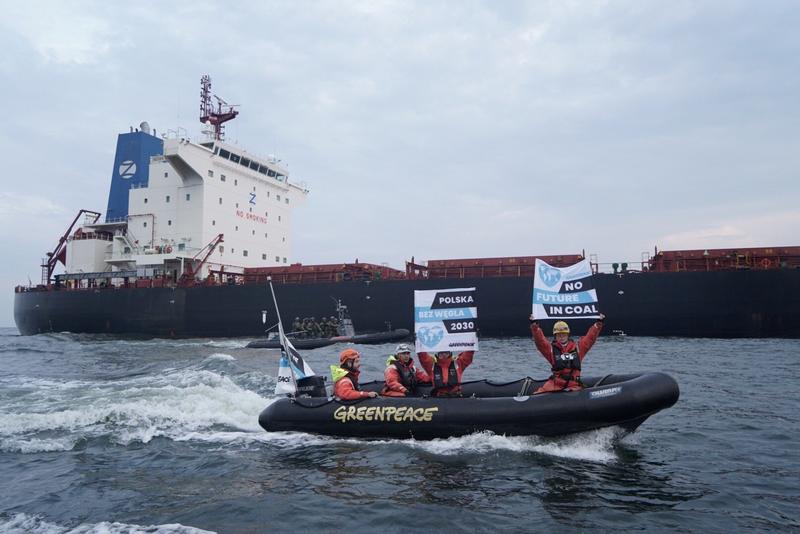 Greenpeace activists and Polish border guards are seen next to a coal ship near a coal terminal in Gdansk, Poland September 9, 2019 in this image obtained from social media. Max Zielinski/Greenpeace Polska via REUTERS THIS IMAGE HAS BEEN SUPPLIED BY A THIRD PARTY. MANDATORY CREDIT.

The environmental group said it staged the protest to highlight Poland’s continued dependence on air-polluting coal and to pressure it to phase out coal as a source of energy by 2030.

Greenpeace’s Rainbow Warrior arrived in Gdansk at 1600 GMT on Monday and the ship anchored around midnight, trying to prevent a shipment of coal from Mozambique from being unloaded, according to Gdansk coastal border guard spokesman Tadeusz Gruchalla.

The activists also painted “stop coal” on the side of the cargo vessel with the coal shipment.

A move away from coal, with mining still a major employer in southern Poland, is a divisive issue in central Europe’s largest economy, where imports almost doubled in 2018 compared to 2017 and whose government envisions only a gradual reduction in the share of coal in power production.

According to Poland’s Industrial Development Agency (ARP) coal imported from Mozambique was used by the steel industry, not the country’s power plants. Szypulski said, however, the protest was not aimed at a particular cargo or company, but was meant as a signal for the government in Warsaw to act.

The overnight intervention by a special unit was part of standard procedure after the activists refused to subject Rainbow Warrior to control, spokesman Tadeusz Gruchalla said.

Out of the 22 activists that took part in the action, two have been detained by border guard officials and were awaiting the prosecutor’s decision, Gruchalla said.