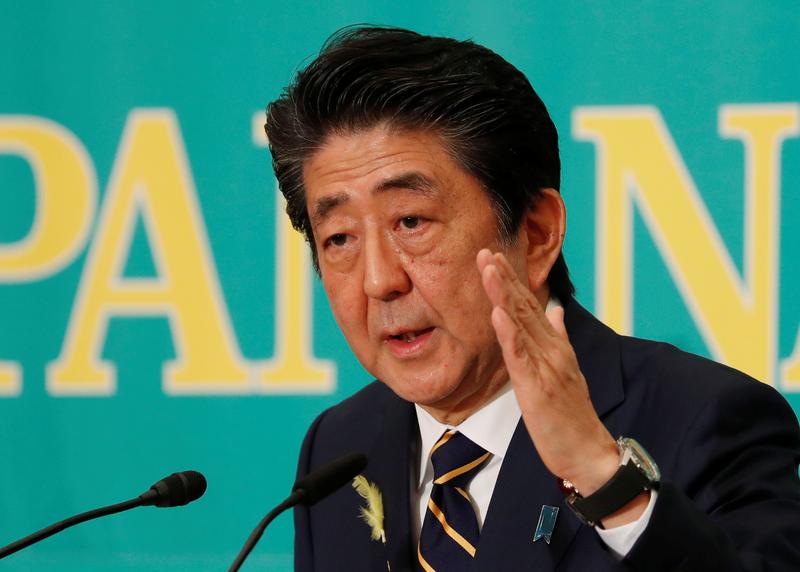 TOKYO (Reuters) – Japanese Prime Minister Shinzo Abe will draft the son of former premier Junichiro Koizumi into his cabinet and keep allies in key posts in a reshuffle on Wednesday, media reported, as Abe readies a tax rise and aims to revise the pacifist constitution.

Abe, poised to become Japan’s longest-serving premier in November, will pick telegenic Shinjiro Koizumi, 38, whom surveys show voters favor as their next leader, NHK public television reported. It did not specify which post he would get.

The appointment could give a popularity boost to the new cabinet line-up. Cabinet posts will be announced on Wednesday after the current cabinet resigns and officials have not commented on media reports about possible appointments.

The younger Koizumi, known as Shinjiro to distinguish him from his father, grabbed headlines last month with news that he would marry Christel Takigawa, a French-Japanese television presenter, and they will soon have a baby.

Abe will also appoint a former Olympic speed skater, Seiko Hashimoto, as Olympics minister to prepare for the 2020 Games in Tokyo, one of two women likely to win posts, media said.

Abe is set to retain Finance Minister Taro Aso, 78, and Chief Cabinet Secretary Yoshihide Suga, 70, both of whom have served in their positions since the conservative leader returned to office in 2012, promising to reboot the economy and bolster the military, political sources and media said.

Aso must help ensure the economy weathers an October increase in the sales tax to 10% from 8% that could dampen consumption when a U.S.-China trade war is clouding growth.

Economy Minister Toshimitsu Motegi, 63, a Harvard-educated lawmaker with a reputation as a tough negotiator, will take over at the foreign ministry from Taro Kono.

But Motegi will probably stay in charge of trade talks with the United States ahead of a deadline for a deal later this month, media reported.

Kono, a fluent English speaker who is well-known in Washington and has been on the front line of Japan’s feud with South Korea over wartime history and trade, is in line to become defense minister, media reported.

Kono, 56, who has a reputation as a maverick and is sometimes mentioned as a possible successor to Abe, would replace Takeshi Iwaya, who upset some ruling LDP colleagues in June by smiling when he met his South Korean counterpart.

“He’s the anti-Trump – it’s a bastion of stability compared to the ‘draining of the swamp’ in America and gridlock in Europe.”

Abe, whose third consecutive term as LDP president ends in September 2021, has made clear he intends to pursue his goal of revising the post-war, U.S.-drafted constitution to clarify the status of the military.

The charter, if taken literally, bans a standing military but has been stretched to allow armed forces for self-defense.

Abe’s task got tougher when his LDP-led coalition lost its two-thirds majority in a July upper house election. Amendments to the charter require approval by two-thirds of each chamber of parliament and a majority in a referendum.

Voter support for Abe was at 48% in a survey this month by public broadcaster NHK, little changed from August.

Social security topped the list of issues voters want the new cabinet to tackle, followed by the economy. Only 5% mentioned constitutional reform as a priority.