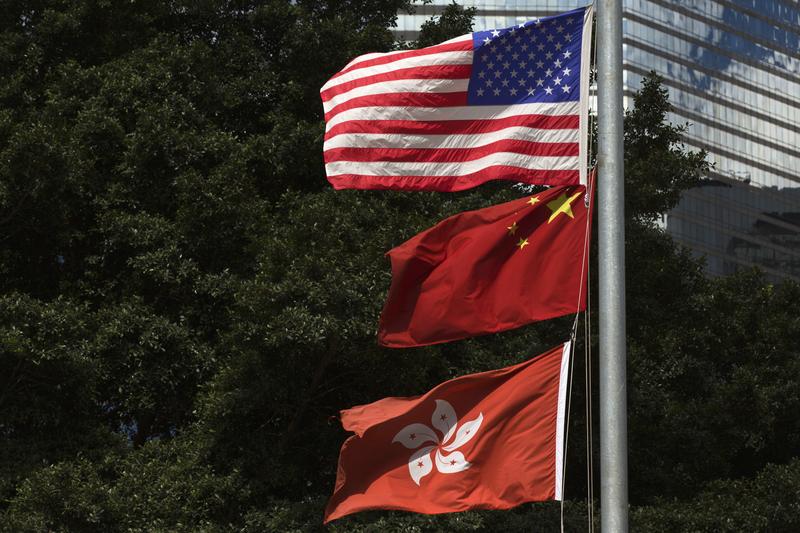 FILE PHOTO: Flags of China, Hong Kong and the U.S. fly next to each other along Fenwick Pier, in Hong Kong June 27, 2013. CREUTERS/Tyrone Siu

The Republican and Democratic lawmakers also expressed concern about the use of crowd control equipment against protesters, seeking to put pressure on Beijing after three months of street protests, including sometimes violent clashes between demonstrators and police.

“We believe it is critical that the United States take appropriate measures to ensure China does not abuse Hong Kong’s special status under U.S. law to steal or otherwise acquire critical or sensitive U.S. equipment and technologies in support of its strategic objectives or to infringe on the rights of people in Mainland China, Hong Kong, and elsewhere,” the senators said in a letter to Secretary of Commerce Wilbur Ross and Secretary of State Mike Pompeo.

The letter asked for “detailed information” about the current status of the U.S. export control regime and an assessment, in writing or via a briefing, as well as an update on any interagency discussions on revamping U.S. export controls as a way to address what the senators described as “China’s continued erosion of Hong Kong’s autonomy.”

The letter asked for a response by Oct. 1.

The letter was signed by the Republican chairman and ranking Democrat on the Foreign Relations Committee, Senators Jim Risch and Bob Menendez, and their counterparts on the Banking Committee, Republican Mike Crapo and Sherrod Brown.

Hong Kong returned to Chinese rule in 1997 under a “one country, two systems” formula that guarantees freedoms not enjoyed on the mainland. But many Hong Kong residents fear Beijing is steadily eroding that autonomy.

Weeks of protests over a now withdrawn extradition bill have evolved into a broader backlash against the government and greater calls for democracy.

Reporting by Patricia Zengerle in Washington; Editing by Chris Reese and Matthew Lewis