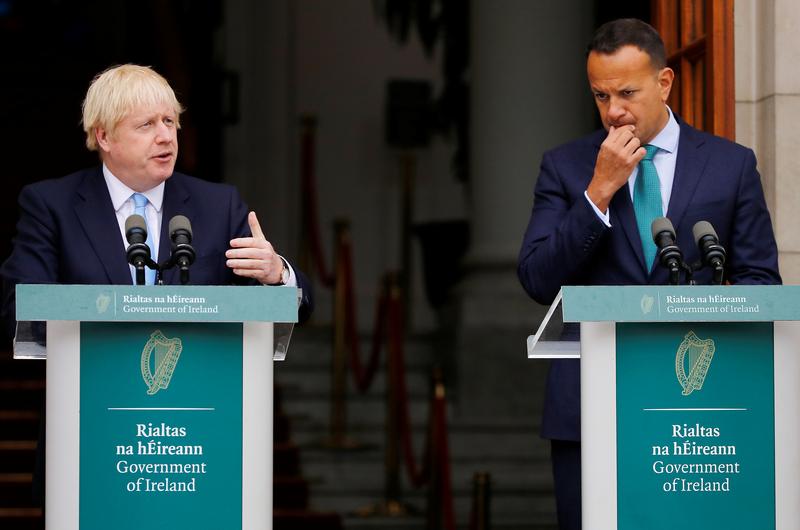 LONDON (Reuters) – Prime Minister Boris Johnson said on Monday he was undaunted by an attempt by lawmakers to block a no-deal Brexit, setting up a showdown with parliament after it passed legislation demanding that he delay Brexit unless he strikes a new agreement.

As he navigates the Brexit storm, Johnson was due to suspend parliament for over a month from Monday after it votes on his latest demand for a snap election, a vote that is likely to go against him.

Johnson had set up the suspension – called a prorogation – last month in what opponents cast as an attempt to sideline lawmakers as he attempts to pull the country out of the European Union by Oct. 31, with or without a withdrawal deal.

Brexit, the United Kingdom’s most significant geopolitical move in decades, remains in question more than three years since the 2016 referendum, with possible outcomes ranging from a no-deal exit to abandoning the whole endeavour.

Johnson, a former journalist who derided the EU and later became the face of the 2016 Vote Leave campaign, has repeatedly promised to deliver Brexit on Oct. 31 and has said he will not countenance any delay.

He wants an election to break the deadlock.

An alliance of opposition lawmakers and rebels from Johnson’s own Conservative Party have passed a bill, which is due to become law on Monday once Queen Elizabeth gives her assent, ordering the prime minister to delay Brexit to 2020 unless he gets a deal.

“I’m absolutely undaunted by whatever may take place in parliament,” Johnson said in Dublin ahead of talks with Irish Prime Minister Leo Varadkar.

“We must get Brexit done because the UK must come out on October 31, or else I fear that permanent damage will be done to confidence in our democracy in the UK,” Johnson said.

It was unclear what Johnson’s next move would be: the law will oblige him to seek a delay unless he can strike a new deal, but EU leaders have repeatedly said they have received no specific proposals.

Ireland told Johnson on Monday that he must make specific proposals on the future of the Irish border if there is to be any hope of averting a no-deal Brexit, saying Dublin cannot rely on simple promises.

“In the absence of agreed alternative arrangements, no backstop is no deal for us,” Varadkar, standing beside Johnson outside the Irish government, told reporters. “We are open to alternatives, but they must realistic ones, legally binding and workable and we haven’t received such proposals to date.”

The blunt remarks by Varadkar indicate the difficulty of Johnson’s gamble of using the threat of a no-deal exit to convince Germany and France that they must rewrite an exit agreement struck last November.

Johnson, who has no majority in parliament, is seeking an election just a few weeks ahead of the Oct. 31 deadline, though lawmakers have already refused that request once.

He will put forward another motion in parliament on Monday to propose a poll, but it would require the support of two-thirds of lawmakers – and opposition parties have said they will not agree to an election until a no-deal exit is ruled out.

Labour Party leader Jeremy Corbyn met other opposition party leaders on Monday and they agreed they would vote against his election bid.

“All leaders agreed that they would not support Boris Johnson’s ploy to deny the people their decision by crashing us out of the EU with No Deal during a general election campaign,” Labour said.

The no-deal blocking bill will force Johnson to seek a three-month extension to the Oct. 31 deadline unless parliament has either approved a deal or consented by Oct. 19 to leave without one.

“I want to find a deal, I want to get a deal,” Johnson said in Dublin, adding that there was plenty of time to find one before the Oct. 17-18 EU summit.

A spokesman for Johnson said that parliament would be suspended from Monday evening, meaning that an election is very unlikely before Oct. 31 unless parliament is recalled early.

Johnson took over as prime minister in July after his predecessor Theresa May failed to push the withdrawal agreement she had negotiated with the EU through parliament.

Since then, Britain’s three-year Brexit crisis has stepped up a gear, leaving financial markets and businesses bewildered by a array of striking political decisions that diplomats compare to the style of U.S. President Donald Trump.

Trump has praised Johnson as “Britain’s Trump” and the two leaders say they have close ties. Trump has said the EU is being very tough on the United Kingdom.

In the past week alone, Johnson lost his majority in parliament, expelled 21 rebels from the Conservative Party and saw his own brother quit the government, torn between family loyalty and “the national interest”.

On Saturday, his work and pensions minister suddenly resigned, saying the government was focusing 80-90% of its work on no-deal preparations rather than seeking a withdrawal agreement.

Meanwhile two ministers said on Sunday that Johnson would not seek a delay at the EU summit next month – but notably declined to spell out how he would nevertheless obey the new law if no deal is agreed with the EU.

Foreign minister Dominic Raab said the government would “test to the limit” what the law would require ministers to do. The Daily Telegraph reported that Johnson’s office was exploring how it could sabotage any extension request by making it clear to the EU that it did not want a delay.