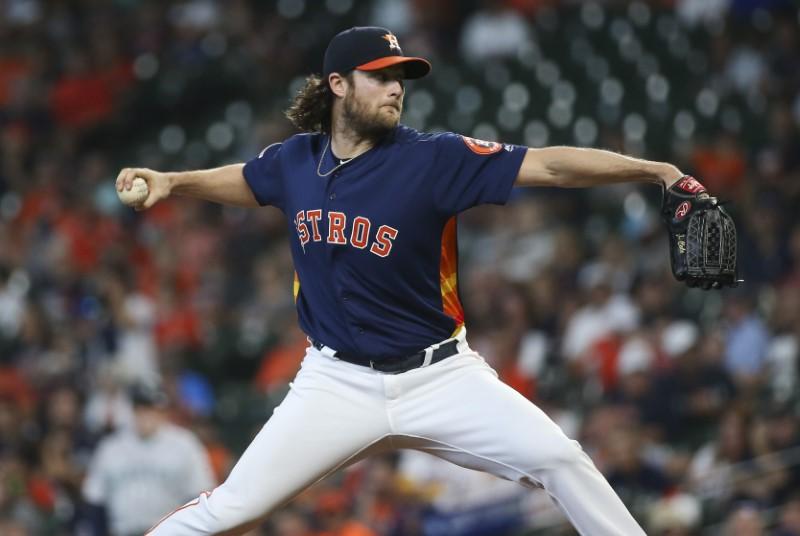 The Houston Astros hammered the visiting Seattle Mariners for 21 runs on 22 hits, and Gerrit Cole set a single-season standard for strikeouts in a 21-1 rout on Sunday afternoon to complete a four-game series sweep.

Cole (16-5) extended his winning streak to 12 by surrendering one run on one hit over eight dominant innings. His strikeout of Seattle right fielder Keon Broxton in the sixth inning was his 11th of the game and 277th on the season, eclipsing the 276 strikeouts he recorded in 2018, his first season with the Astros.

Cole extended his franchise record of double-digit strikeout performances to 17 this season, including five in succession. He became the second pitcher in history with at least 14 strikeouts in three consecutive starts (Pedro Martinez, 1999). He threw 96 pitches on his 29th birthday.

The Astros improved to 16-1 against Seattle this season, a mark that includes a 10-0 record at home. Houston is 16-4 over its last 20 games and matched its franchise record with its 55th home victory this season. The Astros are 27-4 over their last 31 games at Minute Maid Park.

Wil Myers singled home Manny Machado with one out in the bottom of the 10th inning to lift San Diego past visiting Colorado.

Machado drew a one-out walk in the 10th from right-handed reliever Jesus Tinoco. Left-hander Sam Howard came on and walked the only hitter he faced, Eric Hosmer. Myers then greeted right-hander Yency Almonte, the eighth Colorado pitcher, with a line-drive RBI single to center.

Tinoco (0-2) took the loss. Craig Stammen (8-7), the fifth pitcher deployed by the Padres, struck out two in the top of the 10th inning.

Beaty hit his ninth homer of the season, while Seager delivered his 14th.

The game was the last on the bench at Dodger Stadium for Giants manager Bruce Bochy, who is retiring at the end of the season. He finished his career 107-108 in the Dodgers’ home park, the most victories all time by a visiting manager.

Torres had three hits and four RBIs, and Aaron Judge also went deep as the Yankees set a club record for homers in a season at 268, surpassing the 267 they hit last year. New York won for the 11th time in its last 15 games and will seek a series victory in the finale of the four-game set Monday.

Jackie Bradley Jr. and Mookie Betts homered for the Red Sox, who fell to the Yankees for the 13th time in 18 meetings this season and suffered another setback to their slim playoff chances. Boston has dropped five of its last eight and is eight games behind the Oakland A’s for the second AL wild-card berth.

Sandy Alcantara pitched a four-hit shutout and every position player had at least one hit as Miami avoided a sweep by beating visiting Kansas City.

Alcantara (5-12) didn’t allow a leadoff batter to reach until the eighth inning, when he got out of a one-out, bases-loaded jam with a double-play grounder to shortstop. He struck out eight and walked two while throwing 102 pitches.

The Royals had outscored the Marlins 10-2 in the first two games of the series.

Sean Manaea held Detroit to one run on two hits in seven innings, leading Oakland to a victory at home.

Manaea, making just his second start of the season and first at home in more than a year, struck out 10 and walked two for his first win since Aug. 24, 2018. Manaea (1-0) had shoulder surgery last September, and it took the left-hander almost a full calendar year to return to a major league mound.

With Mike Trout out because of a sore big toe on his right foot, the Angels scored their only run of the game on Shohei Ohtani’s RBI single in the first inning off White Sox starter Dylan Cease.

Ryan Braun added an RBI double in the fourth inning, and Eric Thames homered to lead off the sixth inning for the Brewers, who won the final three contests of the four-game set to move within two games of Chicago for the second wild card in the National League.

Brent Suter (1-0) picked up the win after allowing one hit over two scoreless innings in relief of starter Adrian Houser.

Francisco Lindor and Carlos Santana each homered and Mike Clevinger extended his winning streak to 10 games as Cleveland beat Minnesota in the rubber game of their three-game series in Minneapolis.

Lindor also doubled and stole a base, Jason Kipnis went 3-for-4 with a run scored and Franmil Reyes had two hits and two RBIs for Cleveland.

Clevinger (11-2) has not lost in his last 13 starts, since he was beaten June 28 at Baltimore. He allowed two runs and four hits over 6 1/3 innings, striking out seven and walking two. Brad Hand pitched a scoreless ninth for his 34th save.

Right-hander Jack Flaherty struck out 10 in eight scoreless innings to lead visiting St. Louis to a win over Pittsburgh.

Flaherty (10-7) allowed five hits and walked one, and he has been strong as the Cardinals look to lock down the National League Central title. The eight shutout innings matched a career best he set in his previous start against San Francisco.

Paul Goldschmidt had an RBI double and Harrison Bader an RBI single for St. Louis, which took two of three in the weekend series.

Suarez gave the Reds a 2-1 lead with his two-run homer in the third inning, and he tied the game at 3 with a one-out homer in the eighth inning off reliever Jimmie Sherfy. Suarez has 44 homers and leads the majors with 24 homers since the All-Star break.

Ketel Marte hit his fourth homer in six games for a 3-2 lead in the fifth inning for the Diamondbacks.

Phil Gosselin’s pinch-hit RBI single in the sixth inning gave Philadelphia the lead for good in a marathon win over host New York.

By winning the final two games of the three-game series, the Phillies moved within two games of the Chicago Cubs for the second National League wild-card spot while dealing a blow to the Mets’ postseason aspirations.

The game lasted four hours and 29 minutes — one minute shy of the longest nine-inning game in NL history. The two teams combined to use 16 pitchers — eight apiece.

Right-hander Tyler Glasnow made a successful return from a nearly four-month absence and Avisail Garcia supported him and five Tampa Bay relievers with two doubles and a home run, lifting the Rays to a win over visiting Toronto.

Austin Meadows also homered for the Rays, his 28th of the season, as Tampa Bay completed a four-game sweep with a fifth straight win overall.

Glasnow, out with a forearm strain since May 10, pitched the first two innings of the win, allowing a two-run homer to Randal Grichuk in the second inning but no other hits. He struck out five and walked two in his 41-pitch cameo.

This victory completed a Texas sweep of the four-game weekend series, and the Rangers won six of the seven games they played against the Orioles this year. It marked the first time Texas has swept a four-game series in Baltimore since 1972.

Texas twice scored three runs in an inning and got runs in five of the first six frames to turn the game into a rout. The Rangers forced Baltimore starter Asher Wojciechowski out after only two innings.

Scherzer (10-5) allowed only one run on two hits, two walks and struck out nine. Gomes hit a solo home run in the second inning and added another solo shot in the seventh, giving him nine this season. He went 2-for-5 and sparked the team’s 17-hit attack.