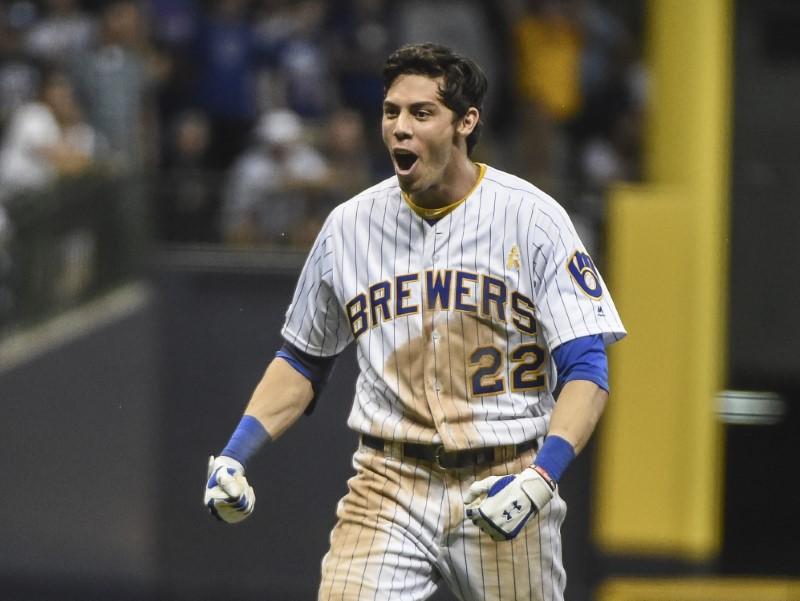 Christian Yelich hit a walk-off double with two strikes and two outs in the bottom of the ninth inning, and the Milwaukee Brewers celebrated a 3-2 win over the visiting Chicago Cubs on Saturday night.

Yelich laced an opposite-field line drive that bounced on one hop off the wall in left field to score Tyler Austin from first base. It capped a terrific night for Yelich, who finished 2-for-2 with an RBI, three walks and three stolen bases. He now has 30 stolen bases, making him the 10th player in MLB history with 40 home runs and 30 stolen bases in the same season.

Addison Russell homered in a losing effort for Chicago, which dropped 3 1/2 games behind the St. Louis Cardinals for first place in the National League Central.

The Cubs learned before the game that shortstop Javier Baez has a hairline fracture in his left thumb and could be out for the rest of the season. The star 26-year-old is hitting .281 with 29 homers and 85 RBIs in 133 games.

The Yankees won for the ninth time in 12 games as they work toward their first American League East title since 2012. After the first nine Yankees were retired in order, they sent nine men to the plate and took a 4-0 lead.

New York took a 2-0 lead when Gary Sanchez’s double off Colten Brewer fell in between second baseman Brock Holt and right fielder J.D. Martinez and kicked into the stands. On the next pitch, Encarnacion hammered a curveball from Brewer that soared over the seats atop the Green Monster in left-center field and landed on Lansdowne Street.

Tyler Beede emerged from some recent struggles to throw five scoreless innings, and Kevin Pillar’s RBI groundout was all the offense visiting San Francisco needed to shut out Los Angeles.

The Dodgers were shut out for just the fifth time this season and for the first time since May 18 against the Cincinnati Reds. Their magic number for clinching their seventh consecutive NL West title remained at four for the second consecutive day.

Sunday will be the Dodgers’ final home game against the Giants this season. Los Angeles holds a slim 8-7 season-series lead against its rival.

Bregman smacked his 34th home run leading off the sixth inning, recording his 100th RBI and tying the game in the process. With his walk in the first, Bregman joined Jeff Bagwell and Lance Berkman as the only players in club history with at least 100 runs, 100 walks and 100 RBIs in a season. Bregman has scored 109 runs in 2019.

On the heels of his third career no-hitter, Justin Verlander (18-5) delivered yet another strong start that seemed pedestrian by his lofty standards. He allowed one run on four hits and one walk with seven strikeouts over seven innings.

Mitch Garver capped his fifth career multi-homer performance with a go-ahead, three-run shot in the seventh inning as Minnesota topped Cleveland in Minneapolis.

Jonathan Schoop had an RBI triple in the seventh inning as the AL Central-leading Twins posted their 11th win in their last 14 contests to move 6 1/2 games ahead of second-place Cleveland.

The victory notwithstanding, Minnesota was dealt a significant blow earlier on Saturday as Major League Baseball handed right-hander Michael Pineda a 60-game suspension without pay for violating the league’s drug policy.

Atlanta got home runs from Ozzie Albies and Josh Donaldson for the second straight night and received another strong effort from starting pitcher Julio Teheran to top visiting Washington.

Atlanta used solo homers from Albies, Donaldson and Matt Joyce and a two-run homer from Brian McCann in winning its season-best ninth straight game, the third straight against the Nationals. The Braves set a modern-era franchise record with its 13th consecutive home win.

Atlanta improved its lead in the NL East to 10 games over the Nationals and lowered its magic number to 11.

Harrison Bader drove in three with a double and a single, Paul DeJong hit a two-run double, and Dexter Fowler and Tommy Edman added RBI singles for the Cardinals.

Wainwright (11-9) allowed one run and six hits, with three strikeouts and one walk. He also doubled, singled and scored a run.

Smyly (4-6) completed seven innings for the second time, not allowing a run either time, since joining the Phillies as a free agent on July 19. He won his second straight start by cruising through the latter portion of his outing, retiring 12 of the last 13 hitters he faced.

Philadelphia gained a game on the Chicago Cubs for the second-wild card spot and are now three back, though the Arizona Diamondbacks are 1 1/2 games ahead of the Phillies.

Travis d’Arnaud’s pinch-hit sacrifice fly broke an eighth-inning tie, and Daniel Robertson followed with his second RBI hit of the game to provide a bit of a cushion as Tampa Bay overcame Toronto in St. Petersburg, Fla., for the club’s fourth consecutive win.

Taking over in a game the Rays trailed 3-2 in the seventh, three Tampa Bay relievers combined for three innings of one-hit, five-strikeout relief, helping the home team improve to 8-1 on its current 10-game homestand.

Pinch hitter Ji-Man Choi led off the bottom of the eighth with a walk against Toronto’s fourth pitcher, Jordan Romano (0-2), and advanced to third on a double by Kevin Kiermaier. One out later, d’Arnaud brought home pinch runner Mike Brosseau with the go-ahead run on his sacrifice fly, after which Robertson singled home Kiermaier for a 5-3 lead.

Chris Bassitt struck out 11 in his return from paternity leave, and Matt Olson had a solo home run among four hits as Oakland thumped visiting Detroit.

Jurickson Profar and Matt Chapman also homered for the A’s, who moved 1 1/2 games ahead of Cleveland in the battle for the second AL wild card.

With the aid of a couple of extra days off for the birth of his daughter, Bassitt (10-5) remained unbeaten in his last seven starts. He allowed two runs and eight hits in six innings, but no walks.

Ketel Marte had an RBI single and scored in a two-run fourth inning, and rookie left-hander Alex Young struck out a career-high 12 in eight scoreless innings as Arizona continued its playoff with a win in Cincinnati.

Young (7-3) gave up only two hits, infield singles by Jose Iglesias in the fifth inning and Curt Casali in the eighth, and walked one while winning his third straight decision. He threw a career-high 109 pitches.

Eduardo Escobar had two hits for the Diamondbacks, who have won five in a row and 11 of 12.

Myers broke up a scoreless pitching duel between Lucchesi (10-7) and Rockies right-hander Jeff Hoffman with a solo homer opening the bottom of the fifth. Machado hit a two-run homer off Hoffman (1-6) an inning later.

Shohei Ohtani had three hits and five RBIs — including a three-run home run — to power Los Angeles to a narrow victory in Chicago.

Angels pitchers struck out 13 White Sox batters. Hansel Robles fanned one in a perfect ninth to earn his 20th save, helping the Angels hold on after they led 7-2 through 5 1/2 innings.

Batting cleanup, Ohtani smacked a two-run double just four batters into the game, sending the first pitch he saw from White Sox right-hander Dylan Covey into left field. Ohtani then struck for a three-run, opposite-field home run off Covey in the third.

The Rangers batted around in that first inning against Orioles starter Aaron Brooks (4-8), who needed 41 pitches to muddle through it. The Rangers scored six runs on just three hits, and those runs came from three straight hitters to give Texas control of the game from the start.

The Rangers loaded the bases with no outs before Nick Solak grounded back to Brooks, who then made a high throw to the plate trying for the force. Danny Santana followed with a two-run single that gave Texas a 3-0 lead, before Odor’s blast.

After the Royals did little of anything against Marlins starter Caleb Smith, who scattered four hits and struck out eight with two walks in six innings, they unloaded against Miami’s bullpen in the seventh.

After RBI singles by Whit Merrifield and Hunter Dozier, Alex Gordon then walked on four pitches, forcing in a run, before McBroom hit a Stanek fastball down the right field line to clear the bases.