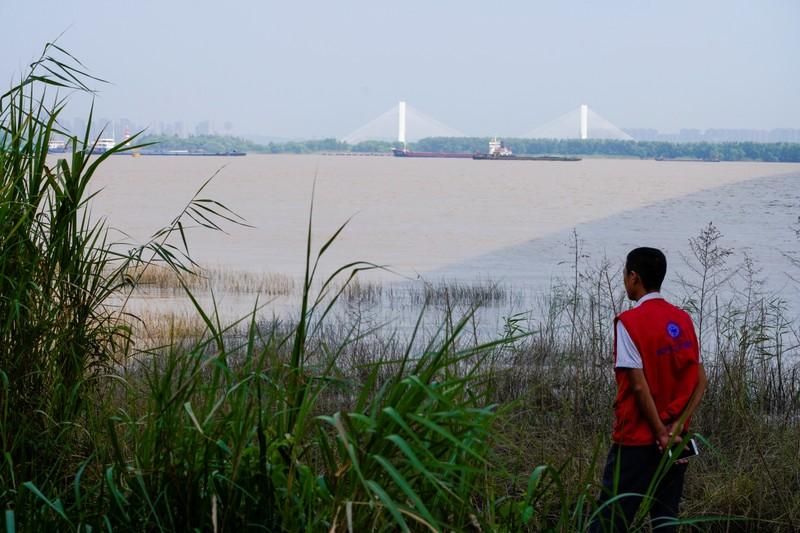 NANJING, China (Reuters) – On a short stretch of the Yangtze river, three sleek grey porpoises twist in muddy waters near the city of Nanjing, protected from passing barges and ships by a row of yellow buoys.

A conservationist keeps watch over porpoises at the Yangtze river near the city of Nanjing, Jiangsu province, China August 21, 2019. REUTERS/Aly Song

With only 1,000 remaining, the Yangtze finless porpoise is a symbol of the damage done to China’s longest river in a decades-long campaign to tame floods, reclaim farmland and industrialize the regions along its banks.

President Xi Jinping’s call for sustainable growth in the Yangtze “economic belt” has raised hopes that the river’s last surviving mammal can become an emblem of China’s environmental revival.

“It has now been scientifically proven that the Yangtze porpoise is a unique species,” said Jiang Meng, who heads a group that oversees the porpoise safe haven at Nanjing.

“If it isn’t protected well, the Chinese government will be under pressure,” Jiang, secretary general of the Nanjing Yangtze Finless Porpoise Conservation Association, told Reuters.

The safe zone is tucked behind a “ecological red line” that bans construction on 34 sq miles (88 sq km) of territory along the shore.

Rows of fish farms have been replaced by lotus ponds teeming with migratory birds. Fishing is restricted and ships are routed away from the zone, which is patrolled daily.

“We chase them away – this is a core area so we can’t let them fish here,” said Yang Jinlong, a fisherman-turned-conservationist.

The porpoise can still be saved, Jiang said. “The numbers are still falling but the rate of decline is slowing.”

It’s been done before, activists say. A decades-long conservation effort saved the giant panda, China’s national symbol, from the brink of extinction. There are around 1,900 giant pandas today, and their numbers are rising.

“It may be too little too late, but what they are doing is unprecedented,” Todd Robeck, author of a recent study into the Yangtze porpoise, said of the effort to save the mammal.

“They are putting in the right pieces to keep this animal from going extinct,” said Robeck, vice president of conservation research at SeaWorld Parks & Entertainment in Orlando, Florida.

From its origins in the glaciers of Tibet to its delta in Shanghai on the eastern coast, the 4,000-mile Yangtze provides water to a third of China’s population.

It has been the scene of profound and destructive environmental changes over the past 70 years, caused not only by giant feats of engineering like the Three Gorges Dam, but also a Mao-era campaign to drain lakes and wetlands.

For decades, its complex ecosystem was sacrificed in a frantic rush for economic growth.

The “baiji” or white-finned dolphin, a larger cousin of the porpoise, was declared “functionally extinct” in 2006. The Chinese sturgeon is also on the brink of annihilation, with fish stocks plunging 90% in the last few decades.

Many porpoises are killed in collisions with boats because noise pollution affects their echolocation, while a degraded habitat and polluted water exposes them to contagious diseases.

A 10-year government action plan released in 2016 blamed “intensified human activities” for the fall in porpoise numbers and said past protection efforts failed to arrest the decline.

However, the action plan was limited in scope, aiming only to “stabilize” porpoise populations, improve monitoring, raise public awareness, and deepen genetic and stem cell research.

Nanjing is considered a model protection zone, and it has spent around 30 million yuan since it opened in 2014 on surveillance equipment and a full-time staff of 20.

And a 40-mile (64 km) stretch of the Yangtze at Anqing, in Anhui province, has been declared a porpoise safe haven and off limits for fishing.

“We are optimistic because the state has made protection a priority,” said Chen Shouwen, a conservation official at Anqing’s rural affairs bureau.

Activists hope publicity will help save the porpoise, but some campaigns can misfire. Conservationists were enraged last year when authorities captured 14 wild porpoises and put them on display in marine parks in Shanghai and along the east coast.

Researchers have had some success in breeding porpoises artificially, but the numbers are small. China may be forced to preserve the species by storing reproductive cells and repopulating the river when conditions improve.

“I don’t think it will ever return to the way it was, but there might be some mitigation efforts where they can thrive quite normally in the Yangtze,” Robeck said.

“I’m really hopeful their efforts will be an example for what can be done in the future.”