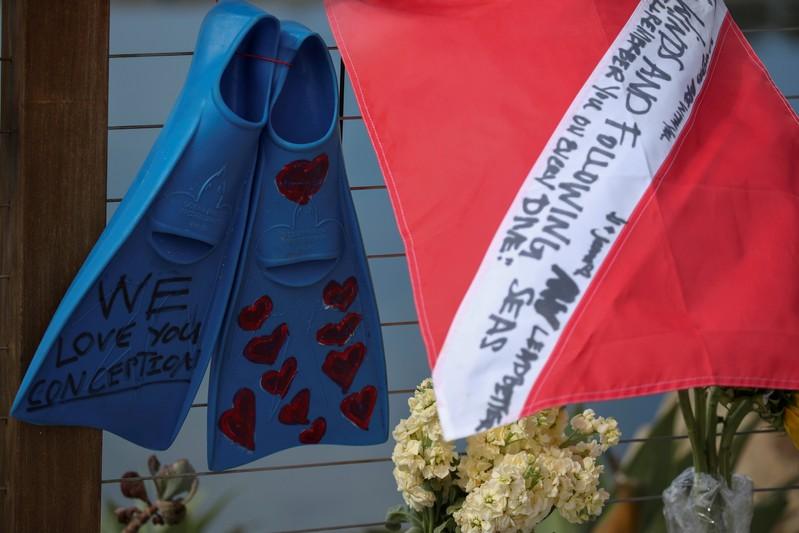 FILE PHOTO: A diving flag and fins hang on a makeshift memorial near Truth Aquatics after a fire that sank a commercial diving boat off Santa Barbara, California, U.S., September 3, 2019. REUTERS/Mike Blake/File Photo

(Reuters) – Federal and local investigators on Sunday carried out search warrants involving the owners of a diving boat that caught fire off the California coast in the middle of the night last week, killing 34 people.

Agents from the FBI, the Bureau of Alcohol, Tobacco and Firearms, the U.S. Coast Guard and the Santa Barbara Sheriff’s Office searched the offices and two additional vessels owned by Truth Aquatics of Santa Barbara, owner of the Conception, on which the deadly blaze occurred last Monday, FBI spokeswoman Laura Eimiller said.

Little is known about what caused the fire to erupt or why no one below deck was able to escape. The FBI’s involvement indicates that authorities are conducting a criminal investigation in the case.

The only survivors, the captain and four crew members, were on deck when the flames erupted shortly after 3 a.m. and were able to escape in an inflatable lifeboat, investigators said.

The 34 victims, including passengers and one crew member, were sleeping below deck. Santa Barbara County Sheriff Bill Brown has said the two exits, a stairway to the galley and an escape hatch, may have both been blocked by fire, and that the victims likely died from smoke inhalation.

Officials did not say on Sunday what they were seeking in the search warrants, and Eimiller said the affidavits submitted to back them up had been sealed.