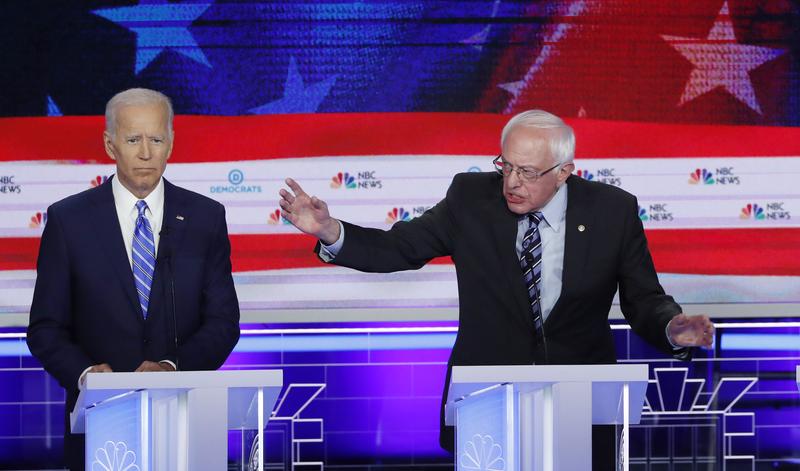 MANCHESTER, N.H. (Reuters) – A parade of 19 Democratic White House hopefuls will plead their case to thousands of New Hampshire party activists on Saturday, hoping a quick sales pitch will help ignite their campaigns in the race to pick a challenger to Republican President Donald Trump in 2020.

More than 10,000 Democrats are expected to jam the state party’s daylong annual convention, where they will hear short speeches from all of the party’s top presidential contenders five months before the state holds a pivotal early nominating contest.

Opinion polls show Democratic front-runner Joe Biden holds a narrow lead in New Hampshire over U.S. Senators Bernie Sanders of Vermont, who won the state’s primary with 60% of the vote during his failed 2016 White House bid, and Elizabeth Warren of Massachusetts.

But party leaders say there is plenty of potential for changes at the top or a late charge by a lower-tier candidate, as many Democrats are still evaluating their options in the crowded field.

“I would say that 80% of the activists in the state have yet to commit, and that could make New Hampshire very volatile in the next few months,” said Ray Buckley, chairman of the state Democratic Party.

The convention comes at a crucial moment. It falls between last weekend’s Labor Day holiday, the traditional end of the summer vacation season and kickoff to political campaigning, and next week’s third Democratic presidential debate in Houston, which will give the top 10 contenders another national platform.

The pace of campaigning and the interest level of voters will accelerate as the race heads to the first state nominating contests in Iowa on Feb. 3 and New Hampshire on Feb. 11.

“After Labor Day, people look at political races differently, especially presidential races, and they start getting much more serious about evaluating candidates,” said Jim Demers, who was co-chairman of Barack Obama’s 2008 New Hampshire campaign and has endorsed U.S. Senator Cory Booker of New Jersey in the current contest.

Exit polls in 2016 found 68% of those who cast a ballot in New Hampshire’s Democratic primary election considered themselves very or somewhat liberal, making the state ground zero for the face-off between progressives Sanders and Warren.

Other contenders, including Biden, Booker and U.S. Senator Kamala Harris, campaigned in New Hampshire on Friday ahead of the convention.

“There is a lot at stake in this election,” Biden said at a town hall meeting in Laconia. “It’s going to take a lot of work to straighten things out.”

All of the Democratic contenders except Wayne Messam, the little-known mayor of Miramar, Florida, will attend the convention on Saturday. They will each get seven to 10 minutes to speak.

Tickets to the dinner were offered for sale to the campaigns, meaning the most well-funded and organized will be able to pack in supporters and display their political muscle.

And while the seven-hour program of short speeches runs counter to the traditional New Hampshire fondness for face-to-face campaigning, it can still give people a sense of the contenders.

“You can get a feel for how they handle themselves. You get to contrast who appears really comfortable and who is struggling up there. It gives you a different perspective of the race,” Demers said.

New Hampshire Democrats still recall a well-received 1991 state convention speech by a relatively unknown Arkansas governor, Bill Clinton, which helped propel him to a better than expected second-place finish in the 1992 state primary and ultimately to the White House.

“This could be a game changer for a couple of candidates,” Buckley said.