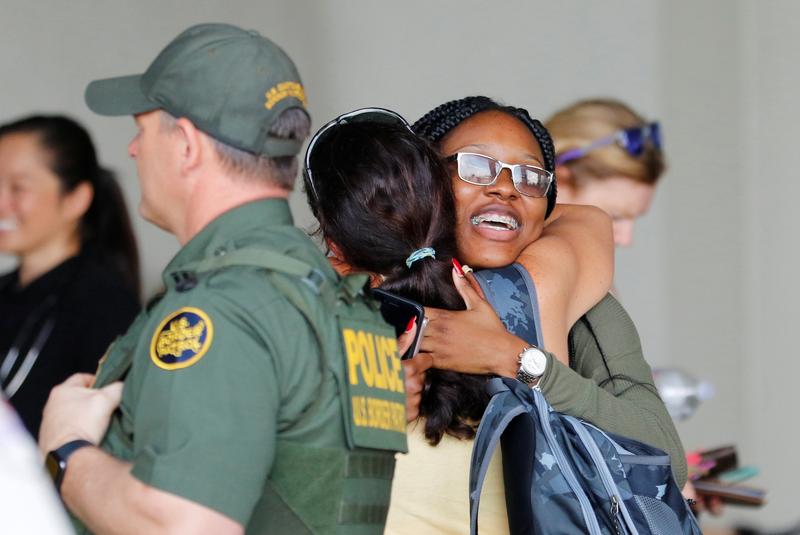 RIVIERA BEACH, Fla. (Reuters) – Hundreds of weary Bahamians, some carrying small bags of belongings and children on their hips, disembarked a cruise ship in south Florida on Saturday after fleeing the catastrophic devastation left by Hurricane Dorian.

The evacuees arrived at the Port of Palm Beach after an all-night voyage on the Grand Celebration, a cruise ship operated by Bahamas Paradise Cruise Line, which offered free passage to the U.S. to a limited number of Bahamians.

“I feel lost between a rock and a weary line but I guess I will make it through,” said Thomas Stubbs soon after he got off the ship.

The 42-year-old owner of an air conditioning and refrigeration business in Freeport said he will gather building supplies and return to that city in the next few days to help repair the homes of about 50 family and friends.

Stubbs was one of about 1,100 evacuees who made the 72- nautical-mile (133 km) journey from Freeport. Thousands had tried to get on board.

Lanell Andrews, 30, arrived with her one-year-old twins who rode in a double stroller.

“We had to do what we had to do. You had to leave,” said Andrews, who will drop off her children with relatives and return to help rebuild her water-damaged home with her husband who remained in Freeport.

“One step at a time,” she said. “We are just trying what we can do and hope for the best.”

Hurricane Dorian, the most powerful hurricane on record to hit the Bahamas, parked itself over part of the archipelago for almost two days earlier this week, pummeling it with Category 5 winds, with some gusts topping 200 miles per hour (320 kph).

Bahamas leaders believe hundreds and perhaps thousands are missing in the nation of about 400,000 people. The official death toll, which stood at 43 on Friday, was expected to rise sharply.

Sophia Morley, a 47-year-old guidance counselor employed by the ministry of education, arrived with her 15-year-old daughter and 74-year-old mother who is blind in one eye and suffers from dementia. Morley wanted to leave her loved ones with friends or relatives in the area until her Bahamas home again has electricity and water. She was not sure where they will stay.

“I have more questions than answers,” Morley said. “We like certainty. But I believe it is going to be alright.”

Officials checked the evacuees’ passports and visa documents before they were allowed to board the cruise ship in Freeport. At the Port of Palm Beach, they were greeted by Immigration and Customs Enforcement agents, who again checked their documents.

They were also met at the port, located about 75 miles (120 km) north of Miami, by friends, relatives, paramedics and volunteers. A row of blue buses stood ready to transport evacuees.

Esperanta Oscar, a pregnant 24-year-old woman, said she has no clue what she will do in Florida.

“I don’t know yet,” said Oscar, a cashier from Great Abaco, standing with her 6-year-old daughter, her 13-year-old sister and her niece.

Writing by Brendan O’Brien in Chicago; Editing by Scott Malone and Chris Reese