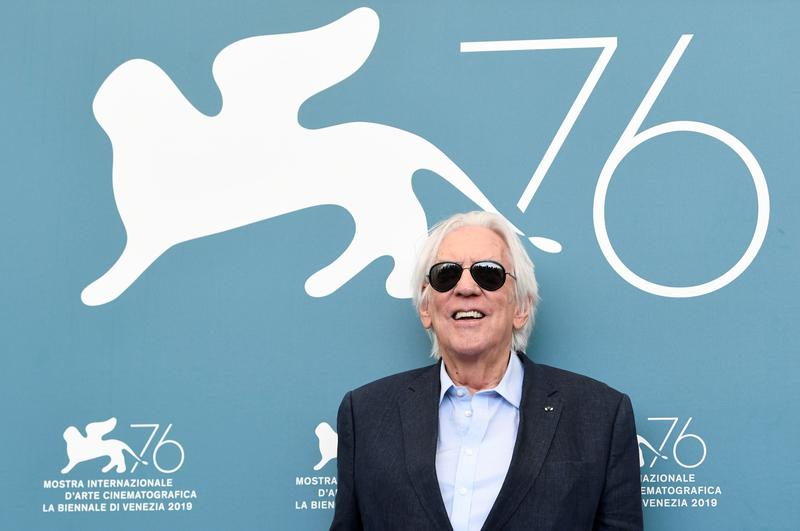 VENICE, Italy (Reuters) – Donald Sutherland closes the Venice Film Festival on Saturday with art thriller “The Burnt Orange Heresy”, about a greedy art critic who goes to extreme lengths for success and fame.

The 84-year-old Hollywood veteran plays a reclusive artist who does not want to share his work in the movie which also starts British rocker Mick Jagger and actors Claes Bang and Elizabeth Debicki.

In an interview with Reuters, Sutherland talked about the role, the directors he admires and relaxing with Jagger.

Below are edited excerpts of that interview:

Q: Why did you want to do this movie, you must get so many offers?

Sutherland: “No I don’t get very many offers, anyone has a job… but this was as beautiful a script as I have read, it was quite really extraordinary. I wrote a letter to my agent saying this. I just want to be a part of it and I loved the character, I loved Elizabeth’s character, it’s beautifully written.”

Q: What did you think about sharing the big screen with Mick Jagger even though you’re not in any scenes with him?

Sutherland: “I wish I had been in a scene with him… I just love him. I have known him for a thousand years.”

Q: Did you get to spend time with him while you were making the film?

Sutherland: “No, he came in just as I was leaving but we sat on beach chairs… on a wharf on Lake Como where he is waiting to shoot and I am waiting for a car to take me to the airport and it was like two old guys sitting. It was lovely.”

Q: Is there anybody that you haven’t worked with that you would like to work with?

Sutherland: “I don’t ever think about working with people. I only think about sometimes maybe you would like to work with a director but I am pretty much beyond that now; if a director wants to work with me – good, but I haven’t worked with many of the great American directors – Francis (Ford Coppola) or Martin Scorsese or Steven Spielberg… I would have liked to work with them but it’s a bit late now.”

Q: Do you have any advice for the next generation of actors?

Sutherland: “Work as hard as you can, you know, get a job – work, work harder, try and be as truthful as you possibly can, read, read a lot, learn, memorize things, enjoy your artistry, study dancing, be a circus performer, learn how to juggle, so many things, but mostly you have to observe.”

Q: Do you ever imagine stopping working?

Sutherland: “I do imagine it, it’s called dying and I try not to imagine too much; I can imagine being dead but then I think about my wife and I don’t ever want to leave her.”