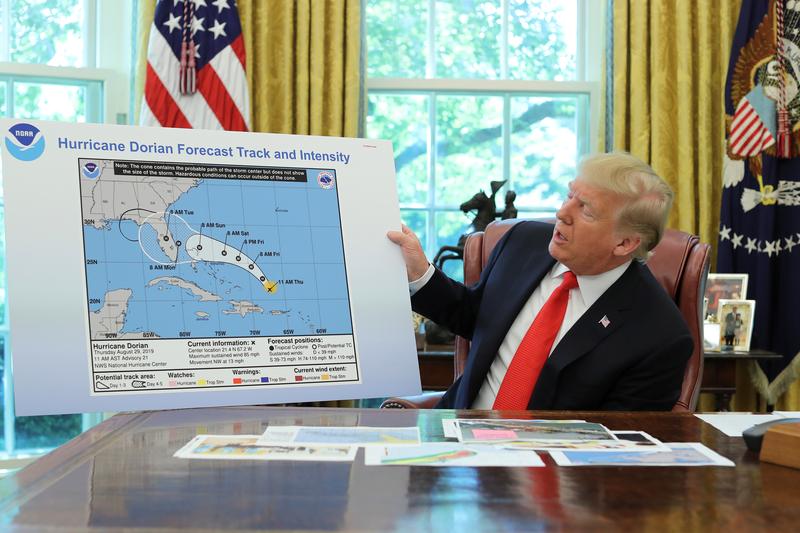 WASHINGTON (Reuters) – President Donald Trump, not someone who easily lets things go, doubled down on Thursday on his insistence that Alabama could have been hit by Hurricane Dorian and enlisted his top homeland security adviser to back him up.

FILE PHOTO: U.S. President Donald Trump looks at a tracking forecast map on Hurricane Dorian as he receives a status report on the storm in the Oval Office of the White House in Washington, U.S., September 4, 2019. REUTERS/Jonathan Ernst

On Wednesday, the president displayed a map of the storm’s projected path that appeared to have been altered with a Sharpie pen to include the state of Alabama, following his remarks on Sunday in which he said it could be affected by the storm.

In fact, the National Hurricane Center’s advisory on Sunday morning did not include the state, and the National Weather Service denied that Alabama would be affected after Trump suggested initial projections showed the storm heading toward the Gulf of Mexico, where Alabama has a coastline.

“Alabama will NOT see any impacts from #Dorian. We repeat, no impacts from Hurricane #Dorian will be felt across Alabama. The system will remain too far east,” the National Weather Service in Alabama tweeted.

News reports about the discrepancies and about the apparently Sharpie-edited map exploded on social media – the term #SharpiePresident was trending on Twitter – prompting Trump to fire back.

“Just as I said, Alabama was originally projected to be hit. The Fake News denies it!” Trump, using his preferred pejorative for the media, tweeted along with a collection of maps on Thursday afternoon. “I was with you all the way Alabama. The Fake News Media was not!”

Alabama is a largely conservative state that supported the Republican Trump in the 2016 election.

Later in the day, after Trump declined to answer a question from a reporter in the Oval Office about his focus on the issue, the White House released a statement from Rear Admiral Peter Brown, the president’s homeland security and counterterrorism adviser, who said he had briefed Trump about the potential path of the storm using the NHC forecast and other models.

Brown said Trump’s comments to the press on Sunday, when he discussed Alabama during a visit to the Federal Emergency Management Agency headquarters, were based on that morning’s Hurricane Dorian briefing, which included “the possibility of tropical storm force winds in southeastern Alabama.”

“In fact, from the evening of Tuesday, August 27, until the morning of Monday, September 2, forecasts from the National Hurricane Center showed the possibility of tropical storm force winds hitting parts of Alabama,” Brown wrote.

Brown noted that the forecast track “changed substantially over time” and areas that were originally seen as targets such as Puerto Rico, South Florida and the Gulf Coast experienced “minimal to no impact from Hurricane Dorian.”

Early NHS models of the hurricane last week showed roughly a dozen or so trajectories, including one that took it into the Gulf. But by Sunday, when the president discussed Alabama, the trajectories clearly showed the storm going to the Atlantic and not the Gulf of Mexico.

Representative Eddie Bernice Johnson, a Democrat from Texas who chairs the House of Representatives Committee on Science, Space and Technology, expressed concern about Trump’s actions in a letter to him on Thursday.

“In times of emergency, the American public need to have confidence in the information being provided by the White House, and misrepresentation of National Weather Service (NWS) forecasts is especially disturbing when it concerns an ongoing natural disaster that has already killed twenty people,” she wrote.