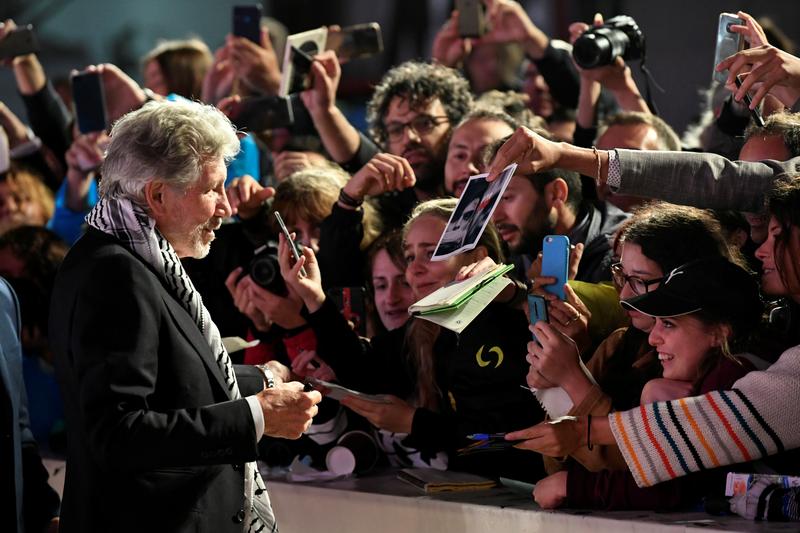 VENICE, Italy (Reuters) – Pink Floyd co-founder Roger Waters brought his “US + THEM” concert movie to the Venice Film Festival on Friday, transporting audiences to one of his live performances.

The movie shows the British rocker on stage in Amsterdam in 2017, a stop during his “US + THEM” worldwide tour, playing Pink Floyd songs as well as material from his last album “Is This the Life We Really Want?”

Behind him, a series of videos address issues including conflict, the migrant crisis, civil rights and politics.

The film was screened out of competition at the festival, where Waters told Reuters its main message was “just love and peace”.

“We live in very very dangerous times and maybe in some small way this show … is a kind of warning really, to say this is absurd what we’re allowing to happen,” he said in an interview.

Waters co-founded Pink Floyd in 1965, and became the British rock band’s principal songwriter. The group was known for its experimental music, and enjoyed a global following with albums such as “Dark Side of the Moon” and “The Wall”.

“My songwriting … has always been just painting what I see … and what I write about tends to involve inner workings of my heart and soul but also my attachment to the predicament of others,” Waters said.

“People often said to me much earlier in my career ‘why are your songs so fucking gloomy?, or ‘why are you always banging on about stuff?’. It’s not a choice, you don’t decide what to write, it’s like saying to (Vincent) Van Gogh ‘why do you paint sunflowers?’ ‘I don’t know. There they were and I painted them’.”

Asked about Brexit, Waters said he regretted Britons had voted in a 2016 referendum to leave the European Union. “I think it will be a complete disaster for the UK,” he said.

Waters left Pink Floyd in 1985 to pursue a solo career. The band reunited in 2005 to perform at the Live 8 concert in London. Turning 76 on Friday, Waters said he has no intention of slowing down just yet.

“I’m very happy people are still listening to my songs and that I can still get bums on seats when I go on the road with a tour, and if people come and watch this movie and if they are moved by it I will be very happy about that as well,” he said.

“I will keep going as long as there’s breath in this body … I’ve got a few years left in me yet I believe.”