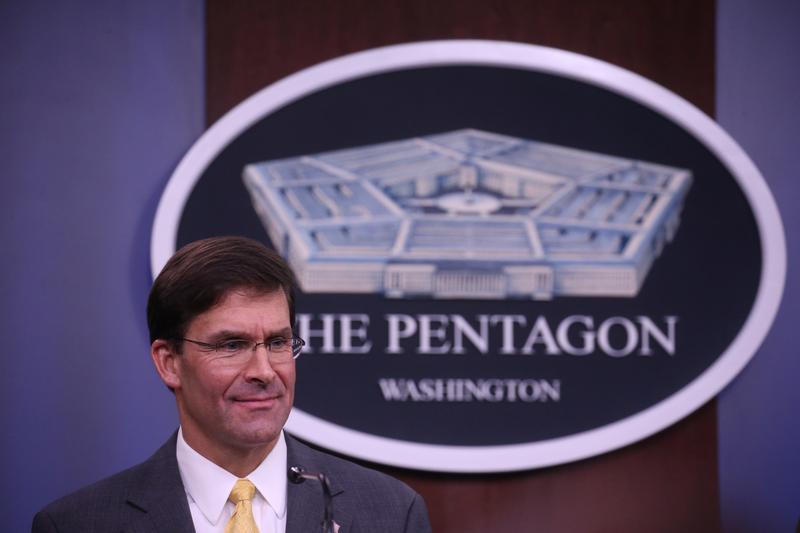 LONDON (Reuters) – U.S. Defense Secretary Mark Esper, in his first major speech, on Friday called for a greater European focus on tackling what he called growing security and economic threats from China and Russia.

Last year, the U.S. military put countering China and Russia at the center of a new national defense strategy, the latest sign of shifting priorities after more than a decade and a half of focusing on the fight against Islamist militants.

“It is increasingly clear that Russia and China want to disrupt the international order by gaining a veto over other nations’ economic, diplomatic, and security decisions,” Esper said at the Royal United Services Institute think tank in London. His comments are largely in line with his predecessors.

“The United States is facing this challenge head-on, but if we are to preserve the world all of us have created together through decades of shared sacrifice, we must all rise to the occasion,” Esper said, adding that both countries were increasing capabilities in the space and cyber realms.

There are a growing number of flashpoints in the U.S.-Chinese relationship, which include an escalating trade war, American sanctions on China’s military, and the U.S. relationship with Taiwan, which Beijing considers a renegade province.

Esper described a litany of concerns about China, from the way it uses its economic power to technology theft,

“I would caution my friends in Europe – this is not a problem in some distant land that does not affect you,” he added.

Responding to a question after his speech, Esper said he would be discussing Huawei [HWT.UL] with his British counterpart later on Friday.

In July, Britain postponed a decision on whether Huawei could participate in building next-generation 5G mobile networks until it had a clearer picture of the impact of U.S. measures taken against the Chinese company.

Esper said that while it was premature for now, there could come a time in the future where the United States’ ability to share intelligence and technology with allies could be impacted depending on how Huawei is being used.

Esper pointed to the situation in Hong Kong, which has been engulfed in angry and sometimes violent protests against the government for months over a bill on extradition from Hong Kong to mainland China.

“We all see what’s happening to those who continue to speak out against the (Chinese Communist Party’s) influence in Hong Kong,” Esper said.

“I was there for the handover in 1997 when the “one country, two systems” designation was affirmed – I would ask you: given what we see in Hong Kong today, has China kept those promises?”

Esper said his preference was for long-term engagement with China’s leadership.

Esper also highlighted the risks posed by Russia, from a potential incursion into a neighboring country to its actions in Syria.

His comments come even as President Donald Trump drew disagreement from U.S. allies recently by calling for Russia to be readmitted to the Group of Seven advanced industrialized countries.

There are increasing concerns that Russia and the United States are headed towards an arms race after Washington formally pulled out of the Intermediate-Range Nuclear Forces Treaty (INF) pact last month, accusing Russia of violating it, allegations Moscow denied.