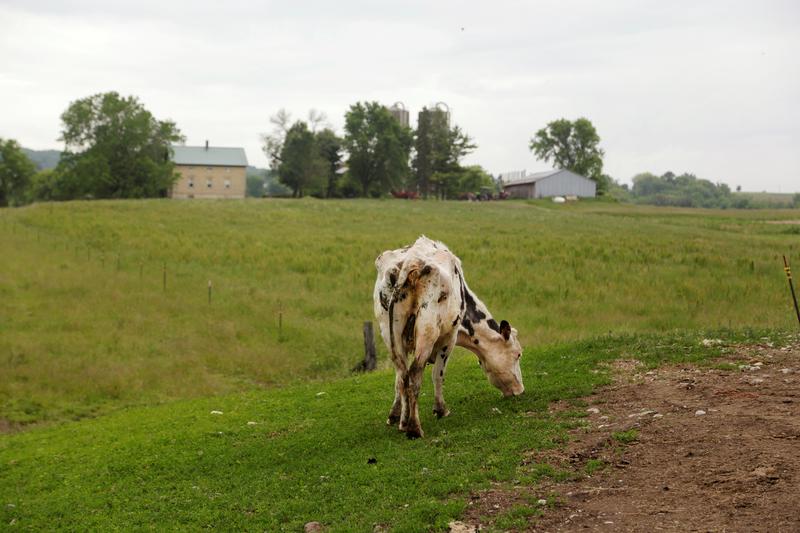 WASHINGTON/CHICAGO (Reuters) – Farm loan delinquencies rose to a record high in June at Wisconsin’s community banks, data showed on Thursday, a sign President Donald Trump’s trade conflicts with China and other countries are hitting farmers hard in a state that could be crucial for his chances of re-election in 2020.

The share of farm loans that are long past-due rose to 2.9% at community banks in Wisconsin as of June 30, the highest rate in comparable records that go back to 2001, according to a Reuters analysis of loan delinquency data published by the Federal Deposit Insurance Corporation.

While the number of seriously delinquent farm loans is rising nationwide, the noncurrent rate has more than doubled at Wisconsin’s community banks since Trump took office in January 2017. It now stands higher than in any other of the top 10 U.S. farm states as measured in production – a list that includes California, Iowa and Texas.

Nationwide, the share of farm loans at all FDIC-insured banks that are at least 90 days past due or are no longer accruing interest because of repayment doubts stood at 1.5% at the end of June, the FDIC data showed.

That marked the highest rate since 2012 but only about half the rate seen at community banks in Wisconsin.

Wisconsin played a pivotal role in Trump’s 2016 election victory and is widely expected to be a battleground again in the November 2020 contest.

Farmers there could be feeling the pinch more than in other big farming states like Iowa because Wisconsin’s crops are touched by multiple fronts of Trump’s trade wars, including with China, Canada and Mexico, said John Newton, chief economist at the American Farm Bureau Federation, an agricultural lobby group.

Wisconsin’s farmers also received smaller federal aid payments than those of Iowa or Illinois, other major agricultural states hit by foreign tariffs, during a first round of federal trade aid payments meant to ease the economic pain of the trade wars, according to an analysis by the Farm Bureau of federal government data on payments through mid-May.

That bailout package focused on helping producers of soybeans, a crop that is grown on more acres in Illinois and Iowa than in Wisconsin. The government started taking applications for a second round of farm-related trade aid in July.

After Trump in early 2018 ordered higher tariffs on all steel imports and on a range of Chinese imports, China, Mexico and Canada quickly responded with retaliatory tariffs targeting U.S. agriculture, including Wisconsin’s large dairy industry.

Although Canada and Mexico lifted tariffs on U.S. agriculture in May, the U.S.-China trade war has dragged into a second year, keeping crop prices and farm incomes low.

‘WE HAVE TO MAKE SOME MONEY’

One in nine jobs in Wisconsin are tied to its $88 billion agriculture industry and the sector’s woes, which have also grown due to severe weather this past spring, could drag on the state economy.

Dave Daniels, a corn and dairy farmer in Kenosha County, Wisconsin, voted for Trump in 2016 and still supports the president.

The drop in grain prices has helped his dairy by making it cheaper to buy feed for his animals. But neighboring grain businesses are suffering and there are few signs of things getting better ahead of the 2020 election year.

“The trade deals are in the back of everyone’s mind right now,” said Daniels, 64. “The thing everyone is saying is, ‘we have to make some money this year.’”

Trump has pledged to overhaul America’s trade relationship with the world, reduce trade deficits and open up more markets to U.S. exports.

But his imposition of tariffs on major trading partners has triggered retaliation that has hurt U.S. farmers. As more farmers have fallen behind on their loans, big banks have also cut their agricultural loan portfolios.

Democratic candidates hoping to challenge Trump next year are seizing on the growing economic pain in the Farm Belt to peel away some of Trump’s support in rural America.

Jim Zimmerman, a corn farmer in Fond du Lac County, Wisconsin, said he was still holding out hope that they could be better off in the long run.

“But talk to me in six months, and if nothing is resolved? It’ll be a different story,” he said.

Reporting by Jason Lange in Washington and PJ Huffstutter in Chicago; Editing by Soyoung Kim and Matthew Lewis