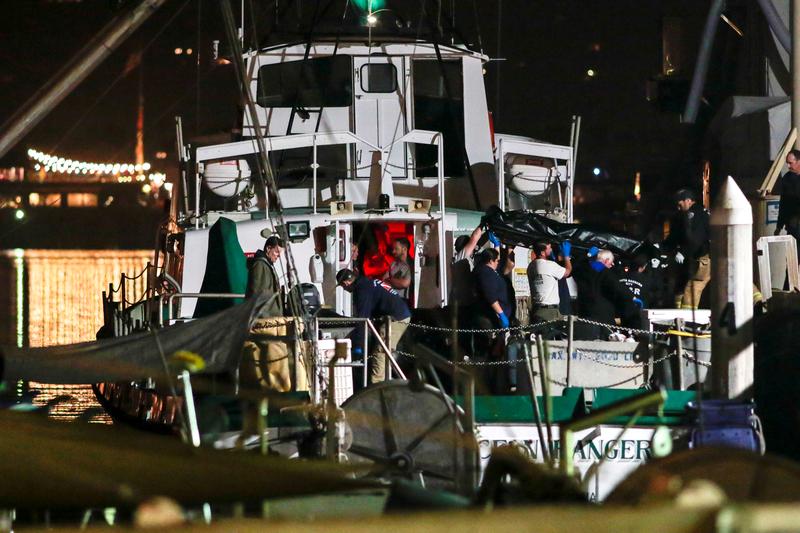 (Reuters) – The company that owns a scuba dive boat that caught fire and sank off California, killing 34 people, has sought to avoid liability by invoking a 19th-century law that has shielded vessel owners from costly disasters such as the sinking of the Titanic.

FILE PHOTO: Rescue personnel return to shore with the victims of a pre-dawn fire that sank a commercial diving boat off the coast of Santa Barbara, California, U.S., September 2, 2019. REUTERS/Kyle Grillot/File Photo

Federal investigators have interviewed here the only survivors from the fire aboard the Conception, the captain and four crew members, as well as Glen Fritzler, whose Truth Aquatics Inc owns and operates the vessel.

Legal experts told Reuters wrongful death lawsuits stemming from the fire are a near certainty.

Accidents that occur on land with a similar death toll could lead to more than $100 million in damages, lawyers said.

But on the water, maritime law applies, and any lawsuits will run up against the statute invoked late on Thursday by Truth Aquatics, which allows the owner of a vessel and its insurer to escape or severely limit its liability in certain cases.

Truth Aquatics filed a petition in U.S. District Court in Los Angeles under the Shipowner’s Limitation of Liability Act of 1851. The law is routinely invoked for an accident on a waterway, whether it involves tugboats and barges in busy harbors or leisure boats at vacation hot spots.

Truth Aquatics did not immediately respond to a request for comment on the petition.

The law allows the owner of a vessel to petition a federal court to exonerate it from damages, or limit damages to the post-accident value of the ship. Truth Aquatics said in its filing that the Conception was now worthless.

“It really is antithetical to most fair-minded people and jurists to allow this old defense to potentially let someone off scot-free,” said Daniel Rose, an attorney with the Kreindler & Kreindler firm, which represents victims in maritime accidents.

The 1912 sinking of the Titanic on its maiden voyage, in which more than 1,500 people were killed, is a classic example of the law being successfully employed.

The ship’s owner, White Star Lines, was able to limit its liability in lawsuits in the United States to $92,000, which was the value of the lifeboats that survived the accident.

The act requires an owner to show its actions did not cause the accident, or as 19th-century maritime law put it, that the owner lacked “privity or knowledge” of the incident. Owners rely on evidence that their ship was properly equipped, the crew well-trained and procedures were being followed.

In the case of the Titanic, the ship was state-of-the-art and deemed unsinkable, and White Star Lines played no part in the captain’s navigation into an iceberg.

“These days a master won’t scratch himself without asking the owner’s permission,” said Martin Davies, who teaches admiralty law at Tulane Law School.

In the case of the Conception, a judge would look for evidence that showed the owner had “knowledge,” or some involvement in the accident. The captain and four crew were on deck when the flames erupted early Monday morning and were able to escape in an inflatable lifeboat, investigators said. One crew member was sleeping below deck with the passengers.

“I think court would look to the competency of the crew, their background, education, what was put on board for firefighting equipment, what training the crew had, what training the passengers had,” said Michael Karcher of Karcher, Canning & Karcher, who also teaches at the University of Miami Law School.

Truth Aquatics said in its court filing the fire was not “caused or contributed to by any negligence, fault or knowledge” on the part of Truth Aquatics. Legal experts said owners have to show an accident cannot be linked to something they did or should have done, and owners often try to pin the blame on a crew member.

The Truth Aquatics fleet is moored in Santa Barbara, California, and the Conception was on a three-day excursion to the Santa Cruz Islands.

Judges have been reluctant to apply the law outside purely maritime accidents, especially in high-profile accidents involving tourists, lawyers said.

“The courts are generally not in favor of it,” said Karcher. “It’s a fairly high threshold.”

The act was invoked in last year’s duck boat accident near Branson, Missouri, which killed 17 people. Even though the judge has yet to rule on the petition to limit liability, many of the victims’ claims have settled.

Kreindler attorney Rose said it was not unusual for an owner to try to strike settlements in headline-grabbing cases.

“In a case with egregious facts you don’t want to push too far because they risk raising the ire of the public and people in Congress who maybe take a look at the law anew,” Rose said.