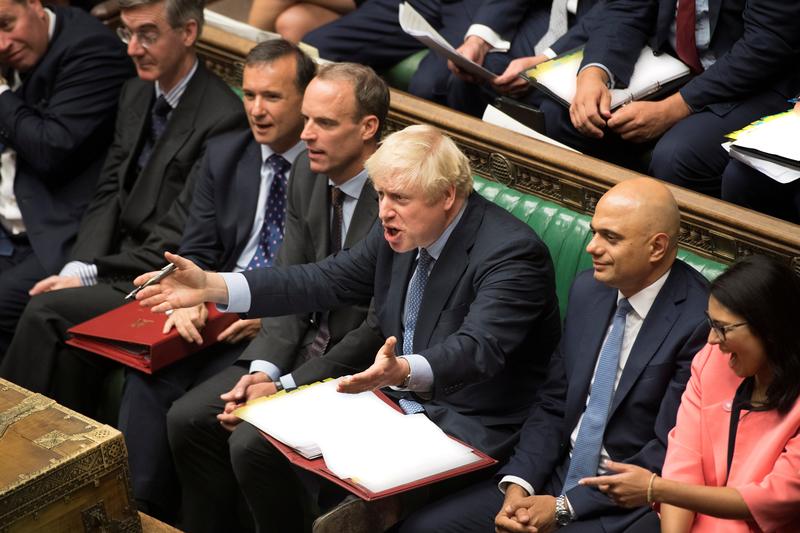 LONDON (Reuters) – The British parliament voted on Wednesday to prevent Prime Minister Boris Johnson taking Britain out of the European Union without a deal on Oct. 31, but rejected his first bid to call a snap election two weeks before the scheduled exit.

After wresting control of the day’s parliamentary agenda from Johnson, the House of Commons backed a bill that would force the government to request a three-month Brexit delay rather than leave without a divorce agreement.

Opposition Labour party leader Jeremy Corbyn said he would agree to hold an early election once the bill passed the upper house of parliament, the House of Lords, and became law, something that could happen on Monday. He did not, however, say whether he agreed with Johnson’s choice of date.

The current parliament’s bid to tie Johnson’s hands leaves Brexit up in the air, with possible outcomes ranging from a no-deal exit from the EU to abandoning the whole endeavour – both outcomes that would be unacceptable to swathes of the United Kingdom’s voters.

An alliance of opposition lawmakers and rebels from Johnson’s Conservative Party voted 329-300 and then 327-299 for the bill in the second and third readings.

Johnson said the bill had scuppered his Brexit negotiations with the EU and was designed to overturn the 2016 referendum on leaving the bloc.

“It’s therefore a bill without precedent in the history of this house, seeking as it does to force the prime minister with a pre-drafted letter to surrender in international negotiations,” Johnson told parliament. “I refuse to do this.”

“This house has left no other option than letting the public decide who they want as prime minister.”

Johnson’s proposal for an election on Oct. 15 – a date that would allow him, if he won, to repeal the blocking bill – secured 298 votes to 56, far short of the 434 needed, as Labour abstained.

Sterling had earlier jumped above $1.22 for the first time since Aug. 30 as investors became slightly more optimistic that a ‘no-deal’ Brexit could be avoided. [GBP/]

Beyond the frantic political manoeuvring, the United Kingdom could still at some point leave the EU with a deal to smooth the transition, leave without a deal, or cancel Brexit.

A prospective election would offer three likely alternatives: a Brexiteer government under Johnson; a Labour government led by veteran socialist Jeremy Corbyn, who has promised a fresh referendum with staying in the EU as an option; and a ‘hung’ parliament with a coalition or minority government.

“If I am still prime minister after Tuesday the 15th of October, then we will leave on the 31st of October with, I hope, a much better deal,” he told parliament.

Johnson said he hoped to get a new deal at an EU summit scheduled for Oct. 17-18, but his opponents doubt he can achieve a better deal than the one his predecessor Theresa May negotiated but failed to get through parliament.

Opponents of Brexit say an acrimonious ‘no-deal’ departure would be a disaster for what was one of the West’s most stable democracies, shattering supply chains, damaging global growth, and weakening Britain’s standing in the world.

Many supporters of Brexit, though, say those fears are overblown and that, while there may be short-term disruption, it would provide a clean break from the struggling bloc and allow the United Kingdom to thrive.

In a sign of how far Brexit has distorted British politics, Johnson’s Conservatives said on Tuesday they were expelling 21 rebels – including the grandson of Britain’s World War Two leader Winston Churchill and two former finance ministers – from the party for seeking to block any ‘no-deal’ exit.

Yet despite Johnson’s efforts to up the ante, the EU has refused to renegotiate the Withdrawal Agreement reached with May.

In Brussels, British and EU diplomats made clear there was no immediate prospect of substantive negotiations on a divorce deal as Britain’s new negotiator arrived for talks.

And Ireland said Johnson had not yet presented any solutions to address the backstop – the toughest part of the Brexit impasse, concerning checks on the land border between the Irish Republic and the British province of Northern Ireland.

There were reports in British newspapers that Johnson’s top adviser Dominic Cummings had described negotiations as a sham.

Asked on Wednesday if that was how he saw the Brexit negotiations with the EU, Cummings told Reuters: “No. I never said that.”

In one piece of good news for Johnson, a Scottish court ruled on Wednesday that his decision to suspend parliament later this month was lawful.