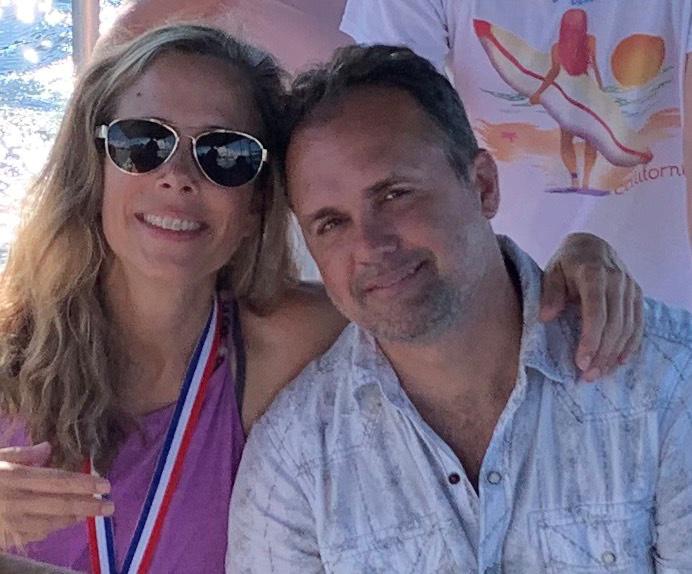 (Reuters) – Federal investigators on Wednesday interviewed the captain and crew of a dive boat that caught fire and sank off the California coast and they also met with families of 34 people killed in one of the state’s worst maritime disasters.

FILE PHOTO: Patricia Beitzinger and Neal Baltz are shown posing during a dive boat trip in Palau in this June 2019 photo. Courtesy Popi Heron/Handout via REUTERS

The badly burned bodies of all but one of the victims of the early Monday morning blaze aboard the 75-foot (23-meter) Conception have been recovered, officials said.

“I can’t imagine what the families are going through right now. It is horrific and they are devastated,” National Transportation Safety Board member Jennifer Homendy said at a news conference.

NTSB experts were spending their first full day of the investigation interviewing witnesses and mapping the wreckage of the Conception, which lay upside down some 65 feet (20 meters) below the surface, Homendy said.

A separate team inspected the Vision, a similar ship operated by the same dive boat company, Truth Aquatics. The Conception, which sank off Santa Cruz Island, will ultimately be raised from the ocean floor.

Truth Aquatics has suspended its dive expeditions during the investigation, which Homendy said would be “very lengthy, detailed and comprehensive.” The preliminary findings would be issued in 10 days and the final report would take up to 18 months to complete, Homendy said.

The only survivors of the accident, the captain and four crew members, were on deck when the flames erupted shortly after 3 a.m. Pacific time and were able to escape in an inflatable life boat, investigators said.

The 34 victims, including passengers and one crew member, were sleeping below deck. Santa Barbara County Sheriff Bill Brown has said the two exits, a stairway to the galley and an escape hatch may have both been blocked by fire.

More details emerged about the victims, who ranged in age from 17 to 60.

A family of five, a teacher and his daughter, and a diving instructor and marine biologist were among those believed to have died, according to local media.

Also killed were Patricia Beitzinger and Neal Baltz, a couple from Arizona who were passionate about diving and “died doing something that they loved together,” Baltz’s father John told local media.

Popi Heron, a 54-year-old finance professional from the San Francisco Bay area, had met them earlier this summer during a dive boat trip in the South Pacific and they had hit it off instantly, she said in a phone interview.

“Even though I didn’t know them very long, their humanity, their beauty as people, their passion as divers, they’re really just wonderful people and I am really going to miss them,” Heron said.

The couple had invited Heron to join them on the trip aboard the Conception, but she said she declined because of concerns about the water being cold.

Another victim was marine biologist Kristy Finstad, 41, who was leading the dive trip and co-owned Worldwide Diving Adventures that chartered the boat for a three-day excursion.