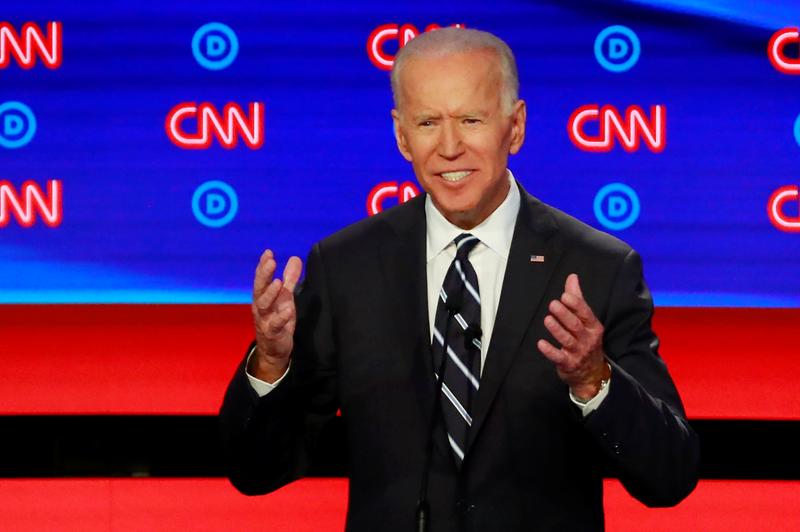 (Reuters) – U.S. presidential hopeful Joe Biden joked about his frequent verbal gaffes on one television show while laying out plans to combat climate change on another on Wednesday night, a high stakes balancing act aimed at shoring up his lead among Democrats seeking their party’s nomination.

In an appearance on the CBS program The Late Show with Stephen Colbert, Biden pretended to confuse Colbert with another comedian and talk show host, Jimmy Kimmel, provoking laughter from the audience, according to a clip of the interview provided in advance of the show’s airing late on Wednesday.

“I think it’s fair to go after a political figure for anything,” Biden said. “But here’s the deal. Any gaffe that I have made – and I’ve made gaffes like every politician I know – has been not about a substantive issue.”

Biden, who served as vice president under former U.S. President Barack Obama and was a senator from Delaware for decades, leads the pack of 20 Democrats seeking the party’s nomination to run against Republican incumbent Donald Trump in 2020, polling as high as 32 percent in some polls, while others trailed him by double digits.

He has positioned himself as a pragmatist in a field of candidates who are moving to the left under pressure from the party’s progressive wing, winning support from minority voters and others who believe he would be most likely to defeat Trump.

But Biden has stumbled in public statements in recent weeks, confusing details of a ceremony honoring soldiers, and mixing up the names of states that he had visited, among others.

While he has long been known for making verbal gaffes and in some circles is almost beloved for them, Democrats desperate to unseat Trump worry that verbal misfires will make the 76-year-old seem too old to take on Trump, even though the two are close in age.

To keep his lead, Biden must persuade voters not only that he is strong enough to battle Trump, but that he is serious about taking on important issues that Democrats are passionate about. To that end, Biden also appeared on Wednesday on a CNN town hall on climate change, one of 10 Democrats taking questions from viewers, audience members and news anchors.

In that appearance, which was still ongoing when CBS released the clip of the former vice president’s appearance on Colbert’s show, Biden said his plan would create 10 million jobs by moving the country toward a future free of fossil fuels and switching to renewables like solar and wind power.

But Biden charted a more centrist path than some of his rivals, saying it might not be possible to wean the country from fossil fuels as quickly as some would like.

He also was not willing to say that he would immediately ban fracking, a controversial method for extracting oil and gas from shale rock formations. Biden was also forced to defend a fundraiser that involved an official at a company that produces natural gas.