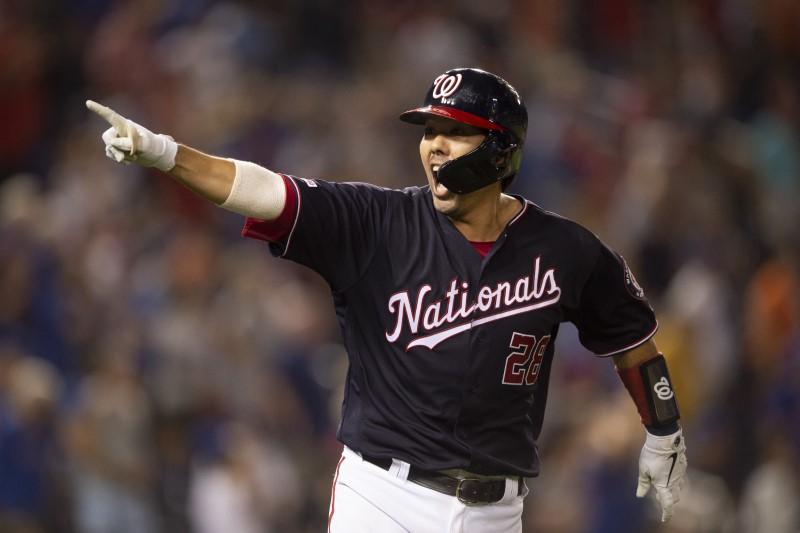 After the Mets scored five times in the top of the ninth to build a 10-4 lead, Trea Turner doubled home Victor Robles in the bottom of the inning to make it 10-5. Anthony Rendon’s single brought home a run, and with the bases loaded, Ryan Zimmerman doubled to the wall in right-center off Edwin Diaz (1-7) to pull Washington within 10-8.

That brought up Suzuki, whose 16th homer of the year capped the improbable comeback. The teams combined for 12 runs on 11 hits, including three home runs, in the ninth inning. Javy Guerra (3-1) got the win by getting the final out in the top of the inning.

Washington has won five of its last six and 10 of 12, winning on the biggest comeback in the bottom of the ninth inning in franchise history. It also marked the biggest blown ninth-inning lead in Mets club history.

Jorge Soler broke the Kansas City single-season home run record with his 39th of the season, and Ryan O’Hearn hit a walk-off homer in the ninth inning to give the Royals a win over visiting Detroit.

Kansas City’s Ian Kennedy blew a save for the first time in 15 chances when he allowed an RBI single to Ronny Rodriguez in the top of the ninth. However, Alex Gordon’s throw from left to the plate was in time to keep Willi Castro from scoring the go-ahead run on the play.

Gary Sanchez homered twice and Didi Gregorius belted a three-run homer for the Yankees, who won for the seventh time in nine games a day after getting blanked for the first time in 221 games.

Brett Gardner and Edwin Encarnacion added two-run homers for the Yankees, who raised their season total to 261 — six away from the single-season franchise record they set last season.

Miguel Sano slugged a two-run home run, Nelson Cruz added a solo shot, and Minnesota held off host Boston in the opener of a three-game series.

Sano had three RBIs, and Jake Cave drove in a pair for Minnesota, which won for the ninth time in its past 10 games.

Rafael Devers crushed a three-run homer, and Andrew Benintendi also went deep for the Red Sox, who fell for just the third time in their past nine games.

Jordan Lyles scattered six hits and two runs over 6 1/3 innings as host Milwaukee earned a split of its two-game interleague series against Houston.

Lyles (10-8) improved to 5-1 with a 2.56 ERA over seven starts since joining the Brewers via a trade with Pittsburgh on July 29. Zack Greinke (14-5) took his first loss in six starts with the Astros. He allowed four runs on eight hits with four strikeouts over six innings.

Astros center fielder George Springer was carted off the field after the top of the fifth inning after crashing into the outfield wall while corralling a Ryan Braun fly ball. He was being evaluated for a head injury, and the team listed him as day-to-day.

Bryce Harper drove in his 100th run of the season to help lift visiting Philadelphia over Cincinnati, becoming the first Phillies hitter with at least 30 home runs and 100 RBIs in a season since Ryan Howard in 2011.

Scott Kingery homered for the second consecutive game, Adam Haseley doubled twice and scored two runs, and J.T. Realmuto and Corey Dickerson added two hits apiece for the Phillies, who have won the first two games of the four-game series.

Contreras went deep in his first game back from a stint on the injured list because of a right hamstring strain. Ben Zobrist also enjoyed a successful return to the Cubs as he went 1-for-3 with a walk and two runs in his first appearance since leaving the team in early May because of personal reasons.

Chicago wrapped up a two-game sweep against the Mariners and finished with a 12-8 record in interleague play this season. Seattle loaded the bases in the first, fourth and sixth innings but failed to score each time. The Mariners were outscored 11-2 during the series.

Ronald Acuna Jr. emerged from a slump to hit a triple and score twice in Atlanta’s win over visiting Toronto.

Acuna, who went 1-for-4 with a walk, ended an 0-for-15 streak with a leadoff triple and came around to score the first run. He scored again in the fifth, giving him a National League-best 111 runs.

The Braves won their sixth straight and 14th in their last 16, and they have claimed 10 in a row at home, leaving them two shy of the franchise’s modern-era record set in 2000.

Jack Flaherty threw eight scoreless innings to lead the St. Louis past visiting San Francisco. The Cardinals won for the 20th time in their last 25 games while the Giants lost for the seventh time in eight games.

Flaherty (9-7) allowed just two baserunners: Stephen Vogt on a second-inning walk and Mike Yastrzemski with a single with two outs in the sixth.

Carlos Martinez, pitching for the fourth straight day, closed out the Giants in the ninth inning to earn his 18th save. Marcell Ozuna’s sixth-inning homer produced the game’s only run.

James McCann belted a three-run homer with two outs in the eighth inning, and Eloy Jimenez followed with his second homer of the night as visiting Chicago posted a victory over Cleveland.

The late rally helped Chicago snap a season-high-tying, seven-game losing streak and improve to 8-6 against Cleveland this season.

Roberto Perez’s three-run homer off Evan Marshall (4-2) staked the Indians to a 5-2 lead in the seventh inning before the White Sox rallied for four runs in the eighth against Carlos Carrasco (4-7).

Cooper also had an RBI double, and Miguel Rojas hit a tying homer in the ninth for Miami, which had lost 15 straight road games. Adam Conley (2-7) got the final out in the ninth, and Jose Urena pitched the 10th for his first save.

Adam Frazier hit a solo homer and a two-run single for Pittsburgh, which had won four straight.

Anthony Santander hit a tiebreaking home run in the sixth inning, and Baltimore snapped Tampa Bay’s five-game winning streak with a victory in the opener of a doubleheader in St. Petersburg, Fla.

Trying to avoid any potential impact from Hurricane Dorian, a decision was made to move up Wednesday’s scheduled series finale to Tuesday, forcing the traditional doubleheader. Both teams will be off Wednesday.

After Baltimore’s Rio Ruiz tied the game at 2 with a two-run homer in the fifth, Santander put the visitors ahead with a solo shot down the right field line the next inning. The victory snapped a three-game slide for the Orioles, who got an insurance RBI double from Mark Trumbo in the ninth.

The Rays used a bullpen approach to stymie Baltimore hitters in the nightcap. Diego Castillo (3-8) was credited with the win after pitching two innings and Emilio Pagan earned his 17th save, as the Rays as a staff struck out 13 without a walk.

Tampa Bay’s Ji-Man Choi left the game in the seventh after being hit in the face by the ball while sliding into third on a triple. Teammate Eric Sogard exited in the eighth when he was beaned in helmet by a pitch.