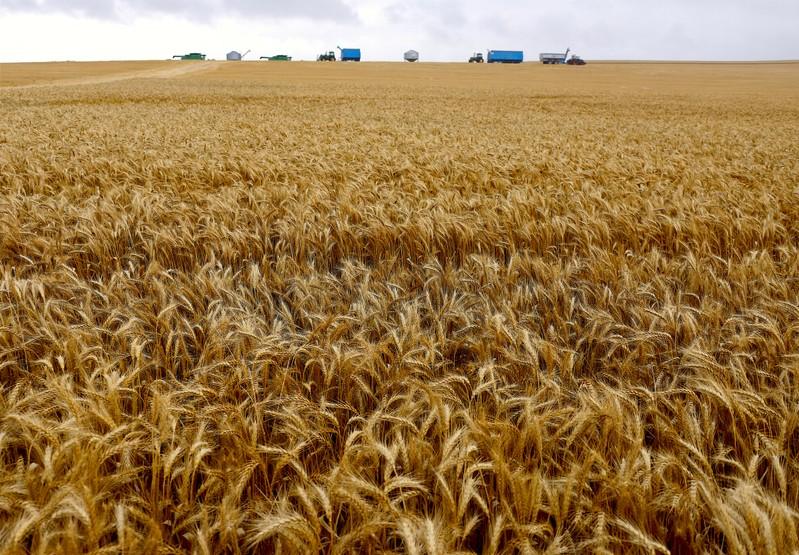 SINGAPORE/SYDNEY (Reuters) – A third straight year of drought in Australia, blighted by forecasts of below-average rains during the crucial spring growing season, means the country’s wheat crop could shrivel by 10% from previous forecasts, traders and industry officials say.

FILE PHOTO: Harvesting machinery can be seen behind a wheat crop in a paddock located on the outskirts of the South Australian town of Jamestown, in Australia, December 1, 2017. REUTERS/David Gray

And the gloomy prospects for wheat output in Australia, once the world’s leading supplier, offers a silver lining to rival Black Sea grain producers such as Russia and Ukraine seeking business in rapidly growing Asian markets.

Wheat production in Australia could drop below 19 million tonnes, industry participants expect, down from the 21.2 million tonnes estimated by the Australian Bureau of Agricultural and Resource Economics and Sciences (ABARES) in June.

“The Australian wheat crop is shrinking at the moment as more and more grain is cut for hay,” said Ole Houe, director of advisory services at brokerage IKON Commodities in Sydney. “We are looking at a crop of around 19 million tonnes at the moment and it could get lower unless we get rain over the next two-three weeks.”

Australian farmers plant wheat in April-May and the crop is harvested in December. The southern hemisphere spring, which starts in September, is the most crucial grain-making phase for the wheat plants.

But after one of the driest winters on record, Australia’s spring is also expected to be warmer and drier than average, the country’s Bureau of Meteorology said last week.

That’s grim news for Australia’s farmers, plagued by the prolonged drought that has parched cattle and sheep farming regions as well as grain growing areas.

In the year to June 2019, Australia’s ranking among the top suppliers of wheat dropped to No. 7 – down from being the third-largest exporter in 2016/17, when production hit a record of 35.1 million tonnes.

But while Australia suffers from wheat production downgrades, global output in 2019/20 is expected to climb to a record high of 768.1 million tonnes, according to the U.S. Department of Agriculture estimates. And Black Sea suppliers stand to gain.

“Asian millers do not look at Australia as such a big wheat supplier as it used to be a few years ago,” said one purchasing manager at a leading flour milling company in Southeast Asia. The manager was not authorized to speak to media and declined to be identified.

“Black Sea wheat prices are not just attractive but they have been improving quality consistently. Australia’s absence from the market is not a huge concern.”

Australian Premium White wheat is quoted at $250 a tonne, including cost and freight, for December shipment to Southeast Asia. Meanwhile while Black Sea wheat of similar quality is being offered around $225 a tonne.

Reporting by Naveen Thukral in SINGAPORE and Colin Packham in SYDNEY; Editing by Kenneth Maxwell