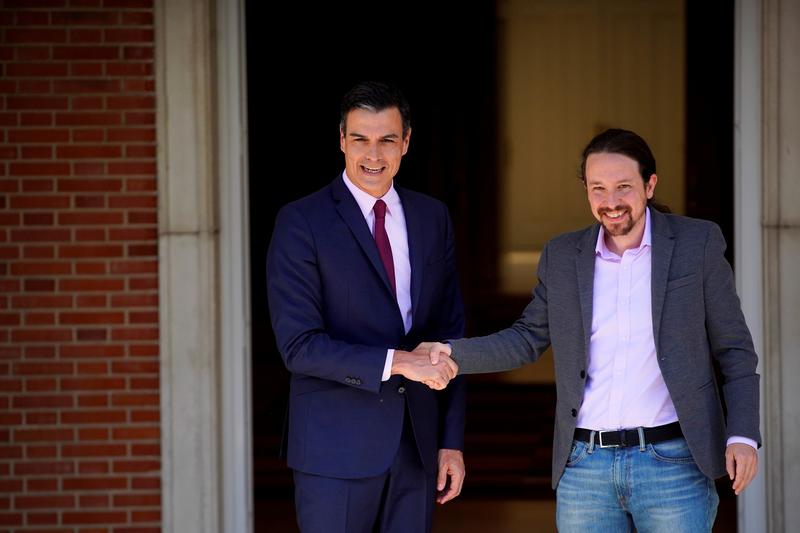 MADRID (Reuters) – Spanish Socialist leader Pedro Sanchez said on Tuesday there were too many disagreements with far-left Unidas Podemos to form a coalition government but offered an option that would see the parties agree on policies and give non-cabinet positions to Podemos.

However, Podemos leader Pablo Iglesias said that a coalition government was the only option.

Sanchez, acting prime minister since an inconclusive election in April, said repeatedly in a speech that he was rejecting Podemos’ demand for a coalition government, but proposed the alternative deal.

The Socialists won April’s vote but failed to win enough seats to govern without the support of other parties. Pressure is building for a deal to be reached on a government – if no agreement is reached by Sept. 23, a repeat election will be held on Nov. 10.

“While today the conditions to become government partners are not met, that’s no reason to be enemies. It’s possible to be loyal allies as we’ve been in the past,” Sanchez told Socialist party members, unions and NGOs in the speech.

Podemos backed the previous Socialist government last year without being part of it.

In a hard-hitting speech, Sanchez insisted a coalition government would not work and talked about the mistrust between the two parties, showing how hard it will be to reach any potential deal.

Iglesias said just before Sanchez’s speech that his party wanted to share power with the Socialists.

After the speech he tweeted: “Politics cannot be based on trust, but on guarantees. A coalition government is the only guarantee to carry out the policies that can change people’s lives. That is what is at stake.”

A government source said that Sanchez’s offer could go as far as offering vice-ministerial positions to Podemos or high-level positions in public companies.

Sanchez also offered to set up independent mechanisms to ensure any deal with Podemos on policies was respected.

In his speech Sanchez said that he was still aiming to seek a deal and there was no objective reason to hold a repeat election, as he presented over 300 policy proposals in a last-ditch effort to secure allies to form a government.

Tuesday’s proposals include reforms in the areas of labor, pension, real estate and the environment that could appeal to Podemos, a senior Socialist party source said.

The Socialist party saw 30% chance of a government deal and 70% of a repeat election, the source said earlier, adding: “But we’re working on the 30%”.

“The idea with the document is on the one hand to pressure Podemos so that it feels the need to change its position and support Sanchez; and if not, we have already paved the ground for the electoral campaign.”

Some of the 370 policies it spells out are designed to appeal directly to Podemos, including an objective to achieve 85% of energy production from renewable energy sources in Spain by 2040, which was part of Podemos’ platform.