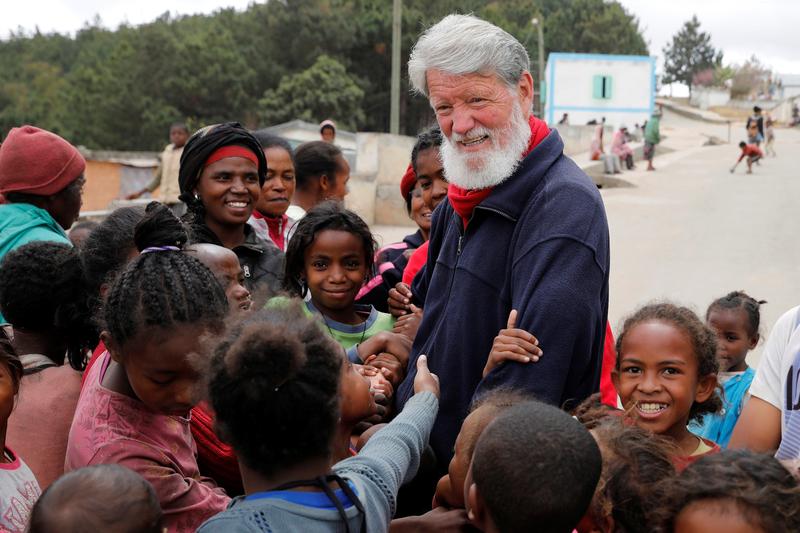 ANTANANARIVO (Reuters) – Three times a year, Father Pedro Opeka celebrates Mass in a vast grey quarry in the hills above Madagascar’s capital. This week, he will welcome his old teacher, Pope Francis, to see the chiseled granite altar from where he ministers.

Opeka studied theology under the future pope in their native Argentina before dedicating his life to building communities for the families of Madagascar, one of the world’s poorest nations.

“The pope is coming to tell people to keep fighting for those who are forgotten,” he said. “The pope will comfort them.”

Over the last 50 years, an organization founded by Opeka has built homes for 25,000 people, 100 schools, six clinics and two football stadiums. Next year they will build a college for paramedics.

Much of the stone for the buildings is quarried just outside the capital city Antananarivo, from the huge granite pit where Opeka holds Mass for 10,000 people. Opeka, the son of a mason, refers to the pit as his cathedral.

“In Europe a cathedral is built on the ground,” the 71-year-old missionary said. “Akamasoa cathedral was dug by hand.”

Pope Francis, the 82-year-old leader of the world’s 1.3 billion Roman Catholics, is visiting Mozambique, Madagascar and Mauritius during his six-day trip to Africa this week.

On Sept. 8, he will meet some of the families whose lives have been changed by Opeka, whose Slovenian parents fled to Argentina before he was born because the Communists tried to kill his father for being Christian.

Opeka invited Francis to visit during a meeting at the Vatican last year, never dreaming that he would accept.

Ratsiory Fanomezanjanahary Tsiadino Fannie, a 13-year-old budding mathematician, lives in one of the homes Opeka has carved from the hillside and is due to meet Francis.

Her pastel green house sits on one side of a leafy courtyard where she plays hopscotch with her six siblings, a stone’s throw from Opeka’s own house in the hillside neighborhood of Akamasoa.

Asked if she was looking forward to next week, she broke into a smile.

Erlinne, a single mother of four children, has also adopted her brother’s two orphans, and taken in another child.

Struggling to find work in the countryside, she moved to Akamasoa, one of the 20 neighborhoods that Opeka’s organization helped build, with her children seven years ago.

She was given a house and a job in a school canteen. Her children are all studying.

“I, who was at the bottom at everything, will see my daughter talking to the pope,” she said, tears welling up. “My heart is full of joy.”

Trained by his father, Opeka built his first wall at 14 and his first home for the poor at 17. He joined a Catholic mission to Madagascar at 22, when he met 800 families living in and around Antananarivo’s municipal rubbish dump. During sleepless nights, he prayed for guidance to ease their suffering.

“I heard people looking for help, shouting for it, but politicians didn’t hear them,” said Opeka. “We have to go where there is a need.”

A member of the Lazarist or Vincentian order of priests, founded to minister to the rural poor, he created the Akamasoa Association to build and run the villages using donations from around the world. His work has earned him the Legion of Honor, France’s highest order of merit.

The straight-talking priest has no time for the bureaucracy and perks of many international aid agencies.

“I don’t want to waste my time filling out paperwork,” he said. “We can beat poverty and we have to beat poverty. Not with words, conferences, or international meetings, but with the poor.”

Residents of neighborhoods built by the association earn around 50,000 ariary ($13) per week in exchange for breaking rocks by hand and building stone walls. They are given a house which they rent at a negligible rate, depending on their circumstances.

The neat rows of candy-colored houses and cobblestone streets streak the hillside around the quarry, surrounded by dark pine trees.

“We make our city beautiful,” Opeka said firmly. “Beauty is not a privilege for the rich.”