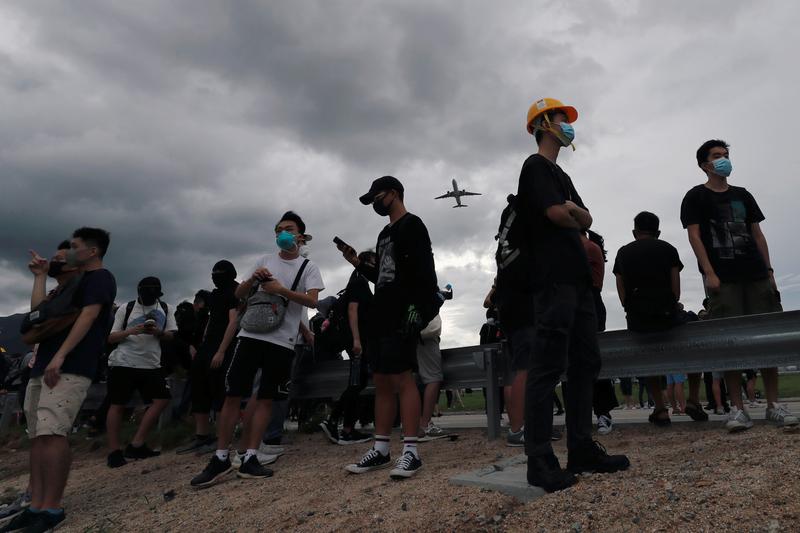 HONG KONG (Reuters) – Hong Kong commuters were met by riot police at subway stations on Monday in tense scenes following a weekend when protesters intensified their fight for democracy in the Chinese-ruled city, which is facing its biggest political crisis in decades.

A plane flies over anti-extradition bill protesters as they demonstrate outside the airport in Hong Kong, China September 1, 2019. REUTERS/Tyrone Siu

Protesters have called for a general strike on Monday but the city appeared to return to relative calm with shops open, trains operating and workers making their way to offices across the global financial hub.

Many primary schools were closed due to a typhoon warning and some older children went to school in hard hats. University students, who have often led the protests, were expected to swap classes for demonstrations later in the day.

“No, no, we’re not going on strike. In these times, we need the money,” said Cherry Leung, 47, as she stacked oranges and watermelons at her street stall.

“I think we’ve had enough trouble for now,” she said.

Thousands of protesters blocked roads and public transport links to Hong Kong airport on Sunday in a bid to draw world attention to their attempt to force Beijing to give greater autonomy to the former British colony, which returned to Chinese rule in 1997.

Airport authorities said 25 flights were canceled on Sunday but that transport services were largely back to normal.

After leaving the airport on Sunday, some demonstrators targeted the MTR subway station in nearby Tung Chung district, ripping out turnstiles and smashing CCTV cameras and lamps with metal poles. Police moved in and made several arrests.

Police and protesters had clashed on Saturday night in some of the most intense violence since unrest escalated in mid-June over concerns Beijing is eroding the freedoms granted to the territory under a “one country, two systems” agreement.

China denies the charge of meddling and says Hong Kong is an internal affair. It has denounced the protests and, with Hong Kong teetering on the brink of recession, has warned of the damage the protests are causing to the economy.

The unrest began over anger at a now-suspended extradition bill that would have allowed people in the city to be sent to China for trial in courts controlled by the Communist Party.

But the turmoil has evolved over 13 weeks to become a widespread demand for greater democracy. China is eager to quell the unrest before the 70th anniversary of the founding of the People’s Republic of China on Oct. 1.