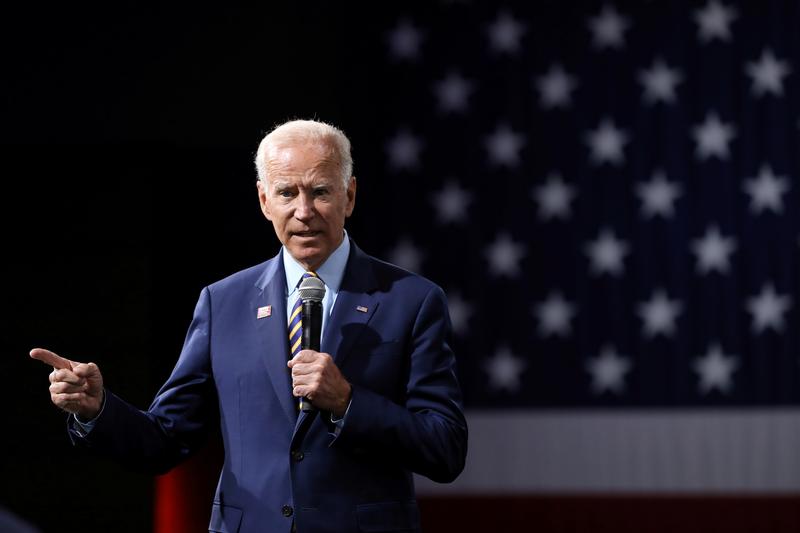 WASHINGTON (Reuters) – As summer ends and the race for the 2020 Democratic U.S. presidential nomination shifts into a higher gear, former Vice President Joe Biden’s perilous position atop the vast field stands to be tested under even more pressure.

Biden, 76, has consistently maintained a comfortable lead over his rivals. But his campaign has been plagued by doubts over his age, fitness for office and whether, as a moderate, he can be a standard-bearer for a party that has grown increasingly liberal.

Those questions are likely to be magnified in the coming weeks.

Labor Day serves as the traditional marker for the White House race to intensify, with five months to go until the first nominating contest – February in Iowa – in the state-by-state process of picking the party’s nominee to challenge Republican President Donald Trump in the November 2020 election.

Democrats enter the next phase of the contest lacking a true consensus candidate, one who can unite a party fractured along ideological and generational lines.

While Biden enjoys widespread name recognition because of his eight years as Barack Obama’s vice president and a long Senate career before that, he stands to suffer as voters begin to focus on other candidates, according to strategists.

That may open the door wider for his closest competitors, U.S. Senators Bernie Sanders and Elizabeth Warren – or another rival – to seize momentum.

“Biden is the weakest front-runner in a contested primary in a long time,” said Democratic operative Joel Payne, who worked on 2016 Democratic presidential nominee Hillary Clinton’s campaign and attributed Biden’s standing largely to voters’ familiarity with him rather than his performance on the campaign trail.

The Democratic field shrank a bit in the past month, with U.S. Senator Kirsten Gillibrand dropping out last week. But 20 contenders continue to vie for the nomination.

Ten Democrats will square off on Sept. 12 at a debate in Houston.

Right now, Democratic strategist Delacey Skinner said, “most people don’t even know who most of the candidates are.”

Jeff Link, a longtime Democratic strategist in Iowa, likened the primary-season campaign to an American football game and said Labor Day marks the start of second half.

“The only thing that matters is the fourth quarter,” Link said.

Biden has weathered fierce attacks from his rivals and his own penchant for misstatements to remain in front. Yet his string of gaffes and episodes of faulty memory have sparked concern over his age and his capacity to battle Trump next year if he is the party’s nominee.

Biden is also viewed skeptically among some Democrats who dismiss him as an out-of-touch moderate in a party moving leftward. Even so, “if Biden is able to minimize his vulnerabilities, it’s still his race to lose,” Payne said.

Beyond Biden, the story of the contest’s first few months was the rise of Warren, whose relentless campaign schedule and formidable state-level organization have made her a serious threat to win the nomination.

She particularly has emerged as a rival to Biden in Iowa, a state he desperately needs to win to reinforce his argument that he is the candidate best equipped to take down Trump.

But questions persist about Warren’s ambitious liberal agenda – she advocates “big, structural change” – and whether she can attract moderate and black voters, as Biden does.

Skinner said Warren can expand her appeal beyond siphoning liberal voters from Sanders and other candidates on the left.

All of the top-tier contenders have faced questions about whether they can bring together a deeply divided party and, ultimately, defeat Trump.

Sanders is a self-described “Democratic socialist” who employs the rhetoric of a revolutionary and has seen his support slide as compared to his 2016 presidential bid when he gave Clinton a tough fight for the party’s nomination.

U.S. Senator Kamala Harris had what appeared to be a breakout moment in the first Democratic debate in June but has since fallen back in the polls. At times, she has struggled to articulate consistent policy stances.

Pete Buttigieg, mayor of South Bend, Indiana, drew a flurry of press attention early in his campaign, but concerns persist about his lack of national experience. He, too, has had trouble drawing support from African-American voters amid criticism over his handling of race relations and policing in his city.

Joe Zepecki, a Democratic strategist in the general election battleground state of Wisconsin that Trump narrowly won in 2016, said flawed candidates are the norm for this stage of the campaign and eventually the party will coalesce behind a nominee.

“They all have flaws because the process of running for president forces those flaws to the fore,” said Zepecki, who worked for Obama’s 2012 re-election campaign. “That’s how we do this.”

While that may be true, the enduring questions surrounding Biden’s age and fitness for office may mean Democrats will lack the “safe” choice they have had in the past, whether the candidate has been former Vice President Al Gore in 2000, former U.S. Senator John Kerry in 2004 or Clinton, the former U.S. senator and secretary of state, in 2008 and 2016.

Iowa’s Link said the 2020 race remains fluid, and even a lower-tier contender such as U.S. Senator Cory Booker or former U.S. Representative Beto O’Rourke could still make a charge.

Reporting by James Oliphant; Editing by Colleen Jenkins and Will Dunham