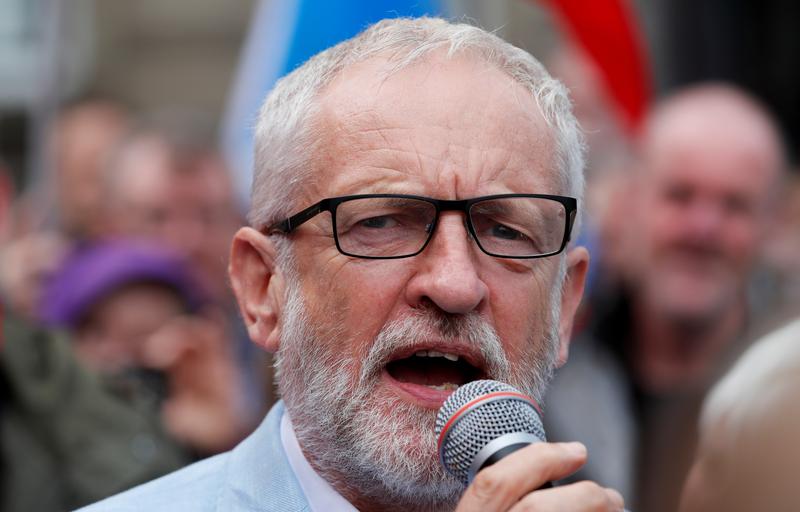 LONDON (Reuters) – Britain’s main opposition Labour Party will do everything possible to stop a no-deal Brexit after parliament returns on Tuesday, its leader Jeremy Corbyn will say on Monday.

Lawmakers opposed to the possibility of Britain leaving the European Union on Oct. 31 without an orderly transition arrangement are drawing up plans to try to legislate to force Prime Minister Boris Johnson to rule out a no-deal exit.

Johnson has said his efforts to strike a new withdrawal agreement with the EU would be hampered by any attempt in Westminster to block a no-deal Brexit.

He has limited lawmakers’ flexibility by suspending parliament for about a month before the Brexit deadline, and if they do pass legislation, senior minister Michael Gove on Sunday refused to guarantee it would be heeded.

Corbyn will say Johnson’s move to shut down parliament is “an attack on democracy which will be resisted”, according to excerpts of a speech he will make in Salford, north England.

“(On Monday) the shadow cabinet will be meeting to finalise our plans to stop the disaster of No Deal ahead of the return of parliament (on Tuesday),” he will say, referring to a meeting of senior Labour figures.

“We are working with other parties to do everything necessary to pull our country back from the brink.”

Johnson told the Sunday Times that the choice for lawmakers was either to side with Corbyn, who “wanted to scrub the democratic verdict of the people – and plunge this country into chaos”, or with those who “wanted to get on with it”.

“It’s a battle of the many against the few who are hijacking the referendum result to shift even more power and wealth towards those at the top,” he will say.

Labour said the threat of a no-deal Brexit was adding to what it said was the damage already done to industry by nine years of Conservative government.

The government said Corbyn was only offering “more delay and uncertainty”.

“Only Boris Johnson and the Conservatives can provide the leadership Britain needs, leave the EU by 31 October, whatever the circumstances, and deliver the change British people voted for,” said Conservative deputy chairman Paul Scully.

Labour’s Brexit spokesman Keir Starmer said on Sunday the party’s plan, which will be published on Tuesday, had one “very simple” aim: to stop Johnson taking Britain out of the EU without a deal, if necessary by forcing him to extend the Brexit deadline again.

Around a dozen lawmakers from Johnson’s Conservatives could back the Labour initiative, former minister Rory Stewart told Sky News on Sunday.

Johnson will meet some of the rebels on Monday to discuss his efforts towards securing a withdrawal deal, another former minister, David Gauke, said on Sunday.