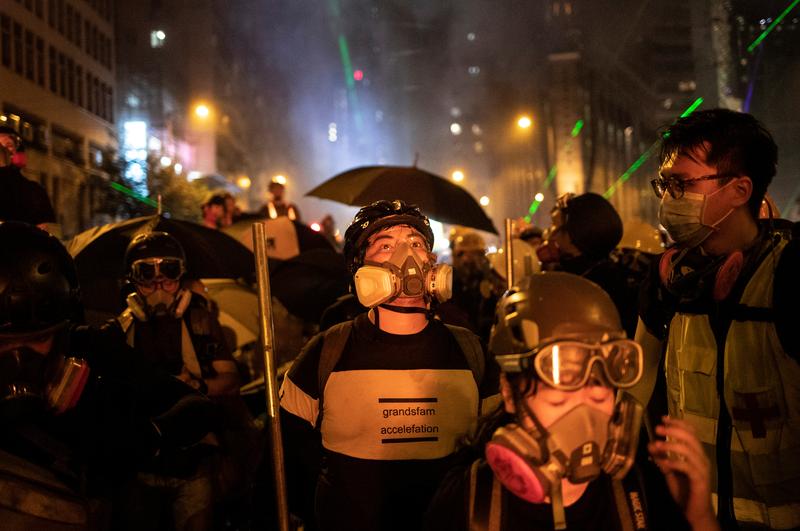 HONG KONG (Reuters) – Pro-democracy demonstrators planned on Sunday to choke travel routes to Hong Kong’s international airport after a chaotic night of running battles between police and masked protesters, the latest wave of unrest to hit the Chinese-ruled city.

Demonstrators wait near a burning barricade during a protest in Hong Kong, China August 31, 2019. REUTERS/Danish Siddiqui

Protest organizers have urged the public to overwhelm road and rail links to the airport on Sunday and Monday, potentially disrupting flights. A similar so-called “stress test” of the airport last weekend failed.

Late on Saturday and into the early hours, police fired tear gas, water cannon and rubber bullets and protesters threw petrol bombs, escalating clashes that have plunged the Asian financial center into its worst political crisis in decades.

Officers fired two warning shots in the air to scare off a group of protesters who had them surrounded and were trying to steal their pistols, the police said, only the second time live rounds have been used in more than three months of unrest.

Parts of the metro system ground to a halt as skirmishes spread to the subway, with television showing images of people being beaten as they cowered on the floor behind umbrellas. Three stations remained closed on Sunday morning.

“A large group of protesters participated in unlawful assembly in various districts since yesterday, despite police’s objection and warning,” the police said in a statement.

“The level of violence is rapidly escalating and their illegal acts have no regard to the laws of Hong Kong.”

The protests, which at one point blocked three key roads, came on the fifth anniversary of China’s decision to curtail democratic reforms and rule out universal suffrage in Hong Kong, a former British colony that was returned in 1997.

The unrest began in mid-June, fueled by anger over a now-suspended extradition bill that would have allowed people in the city to be sent to mainland China for trial in courts controlled by the Communist Party.

But the unrest has evolved over 13 straight weeks into a widespread demand for greater democracy in a territory that many residents believe is increasingly being controlled by Beijing. China denies meddling in Hong Kong’s affairs.

Hong Kong returned to China under a “one country, two systems” formula that allows it freedoms not enjoyed on the mainland, such as the right to protest and an independent legal system.