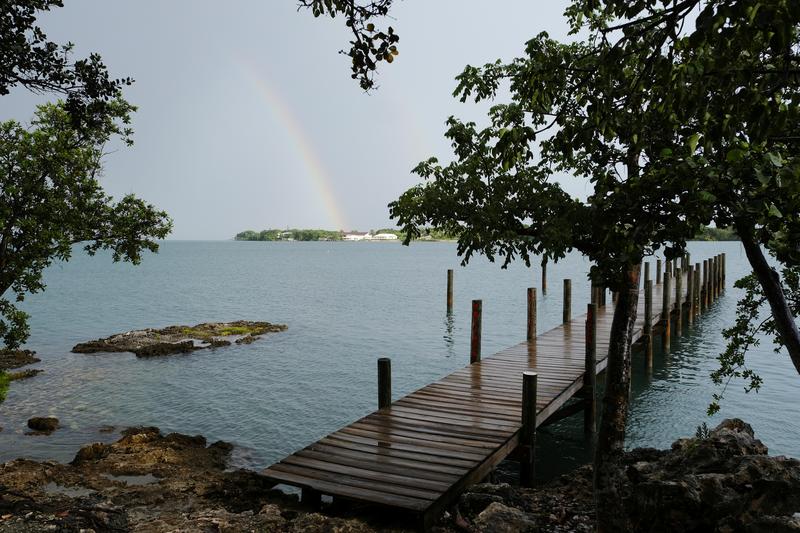 (Reuters) – Authorities in the Bahamas made a last-minute plea to residents and tourists on Saturday to seek shelter as time ran out before powerful Hurricane Dorian hits, warning those that refused to move that their lives were at risk.

A rainbow appears before the arrival of Hurricane Dorian in Marsh Harbour, on the Great Abaco Island, Bahamas, August 31, 2019. REUTERS/Dante Carrer

Packing maximum sustained winds of 150 mph (240 kph), the Category 4 storm was forecast to hit the Bahamas on Sunday with more than two feet of rainfall in places, the U.S. National Hurricane Center said.

Dorian was later due to threaten Georgia and the Carolinas, possibly sparing Florida a direct hit, as communities in those states raised alert levels.

In its direct, immediate path the monster storm was headed for the Bahamian northwestern islands of Grand Bahama and Abaco.

“Dorian will now create prolonged periods of large swells, surges along the north coast of Grand Bahama and the north and east coast of Abaco,” said Jeffery Simmons, the deputy director of Bahamas’ department of meteorology.

“We are asking residents in those areas to leave the coastline, we expect a storm surge of up to 15 feet, in addition to that we have a spring tide that can increase the surge by 2 to 3 feet,” Simmons added.

Once the storm unleashes its fury on the archipelago nation, people will have to ride out Dorian before first responders can venture outside to rescue anyone.

Rescue workers “will not be able to move with 145 or 150 mile per hour winds … so those individuals that want to move I advise that they move now,” said Minnis.

Grand Bahama and Abaco are hubs for the Bahamas’ thriving tourism industry. The nation owes nearly 30% of its direct gross domestic product and half of its jobs to the industry, Joy Jibrilu, director general of the Ministry of Tourism, said.

The country is still reeling from Hurricane Matthew, which ripped into the Bahamas in 2016, as some hotels have taken years to make repairs.

In 2017, the Bahamas tourism industry sagged when hurricanes Irma and Maria cut a deadly path across the Caribbean, though they largely spared the archipelago. The World Travel and Tourism Council said the two storms caused an estimated drop of 826,100 visitors across the region.

“I want you to remember: homes, houses, structures can be replaced. Lives cannot be replaced,” Minnis warned.