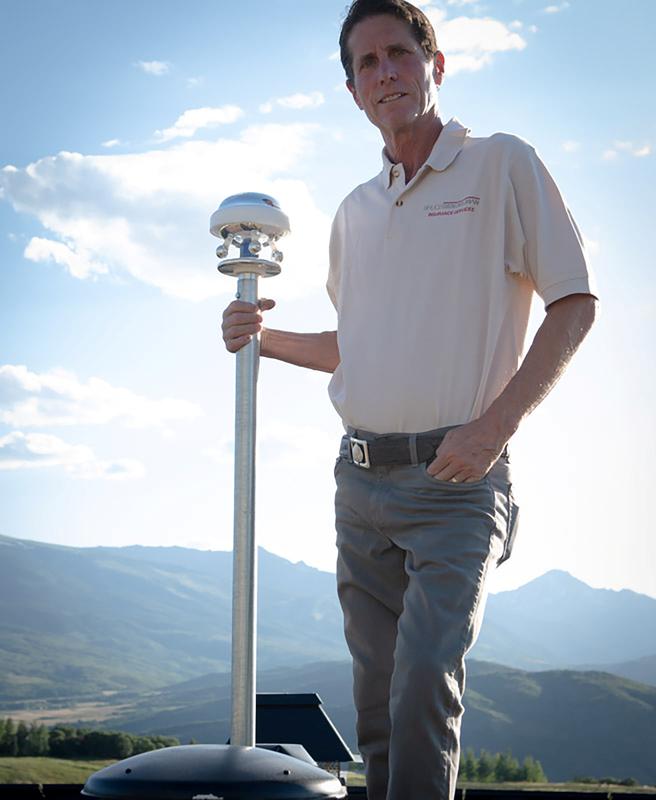 NEW YORK (Reuters) – Bruce Gendelman wanted a mountainside retreat when he bought 12 acres in Aspen, Colorado. But forest fires that have torched nearby land in recent years left him concerned.

FILE PHOTO: Bruce Gendelman stands on the roof of his Aspen, Colorado home in next to a lightning repellant system recommended by an American International Group Inc (AIG) risk specialist in this 2019 photo obtained by Reuters August 15, 2019. Bruce Gendelman/Handout via REUTERS

So Gendelman, who runs an insurance brokerage, tapped into a program that American International Group Inc (AIG.N) offers to help design luxury properties in ways that mitigate disaster risk. A risk specialist made sure his home had a lightning-repellant system, cisterns to hold water run-off and ceramic shingles that look like wood. Just in case a blaze does break out, his driveway was designed to accommodate a fire truck’s maneuvers.

“It’s a very high-end home and we’re dealing with very good contractors,” Gendelman said. “But (the AIG program) brought them systems they never used and resources they never heard of.”

Fires, floods, hurricanes and other catastrophes have cost tmsnrt.rs/2Zq5hUs U.S. insurers more than $170 billion in property losses since 2016, according to Property Claim Services (PCS), part of Verisk Analytics Inc (VRSK.O), and the U.S. Bureau of Economic Analysis.

Few actuaries expect the trend to ease as climate change accelerates, and the swell of claims has prompted some insurers to get involved in the design process for lavish residential properties.

Insurers and industry groups said they do not track data on the service, which is still a tiny part of the property-casualty insurance industry. But executives, real-estate developers and brokers, builders and analysts who spoke to Reuters said they believe it will only expand.

“People don’t naturally think of insurance as the first place to go,” said Jennifer Naughton, head of North American personal insurance risk consulting services at Chubb Ltd (CB.BN). “But an insurance company can give you an advantage of the loss potential and might save you the pain of loss in the future.”

Chubb’s risk managers make sure homeowners who request the service have water storage on the property to supplement the local fire department’s resources, and recommend devices that allow emergency workers to open electronic entry gates, among other measures.

The trend is not entirely new: PURE Insurance has offered the service since its founding in 2007, and others have quietly made risk specialists available to customers who are designing a home and know to ask for the service. But it is now picking up steam as a stand-alone business at some major property-casualty insurers, as more clients worry about extreme weather.

AIG started marketing its service as “Smart Build” in 2015. Initially, only residential construction projects that cost more than $5 million were eligible, but AIG lowered the threshold to $1 million two years later.

AIG would not say how many homes it has helped design in total, but a spokesman said there were 20% more projects enrolled during the first six months of 2019 than in the prior-year period.

Cincinnati Insurance Companies joined the fray more recently, as did Vault, a high net-worth insurer launched in 2017 by a group of former AIG executives. W.R. Berkley Corp is also looking to offer the service as it ramps up business with wealthy clientele.

(GRAPHIC on property losses due to U.S. disasters link: here)

The home design process typically begins with an insurance risk specialist scoping out a site to assess possible dangers. For instance, if there is a high water table underground or a nearby body of water, they may suggest elevating the home or choosing another place to build to avoid the risk of flooding.

Ken Vona, who heads KVC Builders LLC and frequently teams up with PURE, recalled a couple who decided against a location because the house would have to be raised some 18 feet (5.5 m)off the ground to guard against flood risk.

“A perfect example of ‘bad piece of property, nice view,’” he said.

Once a site is selected, specialists review architectural plans, making sure designs are resistant to water and fire damage, among other risks. They scrutinize plumbing layouts, help design hurricane-proof storage rooms to protect valuables, vet the adequacy of sprinkler systems, measure driveway entrances and make sure there is a hydrant nearby.

Cameron Strothman, a senior risk manager for AIG Private Client Group, said he once had to figure out how to protect a site that was four miles away from the nearest hydrant. He liaised with the local fire department and advised the client to install a 30,000-gallon tank under the driveway so that fire trucks could tap a private water source instead. It cost $35,000.

Some of the features are things homebuilders would likely install anyway, like a sophisticated fire alarm or sprinkler system, or measures required by building codes. Others cost very little money but can prevent extremely expensive damage. For instance, there is a $100 sensor that shuts off water systems after detecting a leak.

Adding these features at the time of construction is also cheaper than doing so once the home is built, risk experts said. A protective storage room for fine art may run less than $100,000 if designed into the plans compared to millions of dollars later, said Steve Bitterman, Vault’s chief risk services officer.

Gendelman would not disclose the costs associated with building or protecting his home, but said AIG did not charge him for the advice.

“Providing this service free is smart for everyone,” he said. “They help me with ideas and they get a loyal client.”