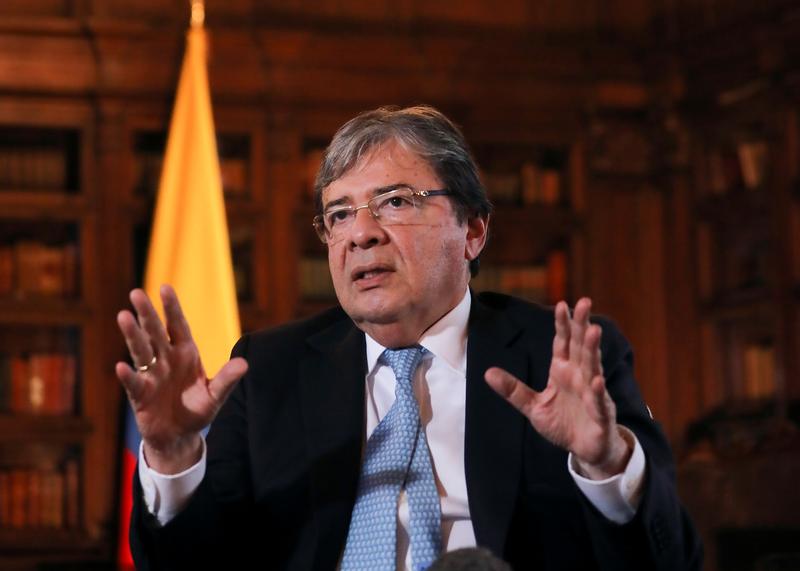 BOGOTA (Reuters) – There is “no doubt” it would be easier to combat Colombia’s rebel groups if Venezuelan President Nicolas Maduro were no longer in power, Colombia’s foreign minister said, amid accusations that Caracas is providing the groups with shelter.

On Thursday, former leaders from the Revolutionary Armed Forces of Colombia (FARC) announced a new offensive in a video believed to have been filmed in Venezuela.

Ex-FARC commanders Ivan Marquez and Jesus Santrich appeared surrounded by armed fighters in a YouTube video, saying a 2016 peace accord had been betrayed.

The announcement was condemned by President Ivan Duque’s government, the United Nations and the FARC political party, whose leadership said the majority of ex-rebels remain committed to peace despite “difficulties and dangers.”

Combating the dissidents, who are estimated to number more than 2,200, and separate rebel group the National Liberation Army (ELN) would be easier were Maduro no longer in power, Foreign Minister Carlos Holmes Trujillo said in an interview late on Friday.

“This regime protects them: it has opened its doors to them. This regime facilitates their actions from its territory,” said Trujillo.

Asked what proof Colombia has of rebel presence in Venezuela, Trujillo said: “There are indicators; there is a hypothesis: that’s the information that we have.”

Venezuela’s foreign ministry on Friday blamed the dissident rearmament on Duque’s failure to follow through on the peace accords.

Maduro later tweeted his government was committed to promoting peace in Colombia and would advance efforts to reestablish conversations between the two sides.

Neither mentioned the issue of rebel presence in Venezuelan territory.

Trujillo said the neighboring Venezuelan government was a “dictatorship.”

Venezuelan opposition leader Juan Guaido, who is recognized by more than 50 countries as his country’s legitimate leader, is committed to the fight against illegal armed groups, Trujillo said.

Maduro says Guaido is a puppet of the United States.

Colombia will seek Interpol red notices for anyone involved with dissident groups who may be based in Venezuela, Trujillo said.

“The ELN is there, commanders of the ELN, and those commanders are going to work in coordination with this narco-terrorist group that was announced (Thursday),” he said.